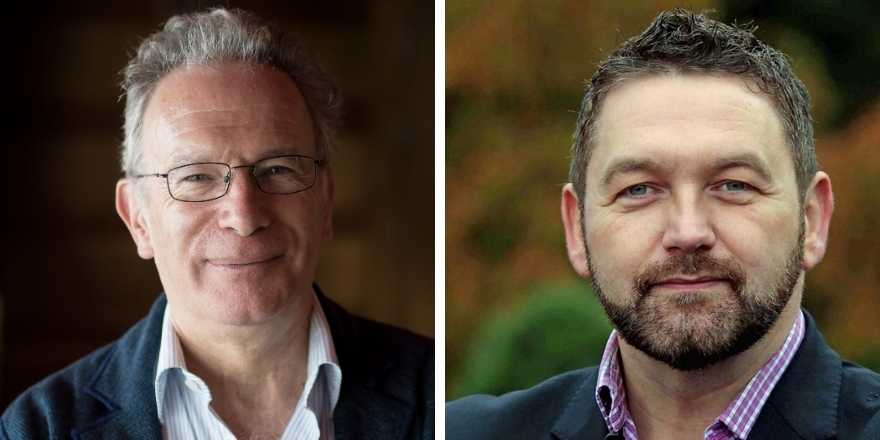 Fintan O'Toole, MRIA and William Crawley, MRIA will discuss the future of Northern Ireland in this conversation style Discourse.

Join Fintan O'Toole ( Irish Times) and William Crawley (BBC) as they discuss the future of Northern Ireland after Brexit.

This event marks the launch of ARINS -- Analysing and Researching Ireland, North and South, a joint project led by the Royal Irish Academy and the Keough-Naughton Institute for Irish Studies at the University of Notre Dame's Keough School of Global Affairs. The ARINS project provides authoritative, independent and non-partisan research and analysis about constitutional, institutional and policy options for Ireland, North and South in a post-Brexit context.

Find out more at arinsproject.com

This discourse is sponsored by Mason Hayes & Curran LLP.

Fintan O'Toole, MRIA is a columnist with The Irish Times, Leonard L. Milberg visiting lecturer in Irish Letters at Princeton University and a regular contributor to the New York Review of Books. He has won both the Orwell Prize for Journalism and the European Press Prize. His most book is The Politics of Pain: Post War England and the Rise of Nationalism (Liveright) and he is working on the official biography of Seamus Heaney.

Born in Dublin in 1958, he has been drama critic of In Dublin magazine, The Sunday Tribune, the New York Daily News, and The Irish Times and Literary Adviser to the Abbey Theatre. He edited Magill magazine and since 1988, has been a columnist with the Irish Times.

William Crawley, MRIA is a journalist and broadcaster with the BBC presenting TV and radio programmes on subjects as varied as news and politics, arts and science, and religion and ethics. He hosts the daily radio current affairs programme Talkback for the BBC in Northern Ireland, Sunday on BBC Radio 4, and regularly writes and presents documentaries for Radio 3, Radio 4, and the BBC World Service.  His television work -- more than 40 documentaries and series -- includes the landmark natural history series Blueprint, which now forms part of the Ulster Museum’s permanent collection; the interview series William Crawley Meets, in which he meets thought leaders from across the world; a three-part autobiographical series documenting life in Northern Ireland (Sorry For Your Trouble, Dying For A Drink, and Losing Our Religion);  Independent People: The Story of Ulster’s Presbyterians; and the 15-part global history of Irish immigration Brave New World.

Educated at Queen’s University Belfast (BA, MPhil, PhD) and Princeton Theological Seminary (MDiv), he served as a Presbyterian minister, university chaplain and lecturer in theology and philosophy before turning to a career in journalism and the media.  He is a recipient of the Eisenhower Fellowship; in 2012 he received an honorary Doctor of Literature (D.Lit.) degree from his alma mater, Queen’s University Belfast, for services to broadcasting; and in 2019 was elected a Member of the Royal Irish Academy.