The Royal Irish Academy champions Irish academic research. One of its principal roles is to identify and recognise Ireland’s world-class researchers. It supports excellent scholarship and promotes awareness of how science and the humanities enrich our lives and benefit society.

The Academy draws its membership from the whole island of Ireland, both north and south. Membership is awarded to people who have attained the highest distinction by their unique contributions to education and research. Each year, up to 24 new Members may be elected.

The Royal Irish Academy also values diversity and strives for a culture of equality and inclusion in all of its activities. As outlined in its Strategic Plan 2019-2023, the Academy is committed to ensuring greater gender, disciplinary, institutional and overall diversity in every area of the Academy and its work throughout the island of Ireland.  It particularly welcomes nominations from under-represented groups and communities.

Learn more about the reseach of our Members.

Members assist the Academy in its work by providing expert advice for its Council and committees, by representing the Academy nationally and internationally, and by promoting the Academy’s strategic mission. Drawing on our Members’ expertise, we make a significant contribution to public debate and public policy formation on issues in science, technology and culture.

At its inception in 1785, the Academy had 88 Members, now there are over 600 (of whom nearly 90 are Honorary Members), almost equally divided between the sciences and the humanities. Each Member is formally admitted in a special ceremony, during which they subscribe to the Member’s Declaration of Obligations and sign the Roll Book of Members.

The Roll Book of Members

Signatures of the founder and early Academy Members, to 1801, are contained in five scrolls (RIA MS 23 N 36/1-5). A Members’ Roll Book was begun in 1802. This is still in use and contains almost all Members’ signatures. 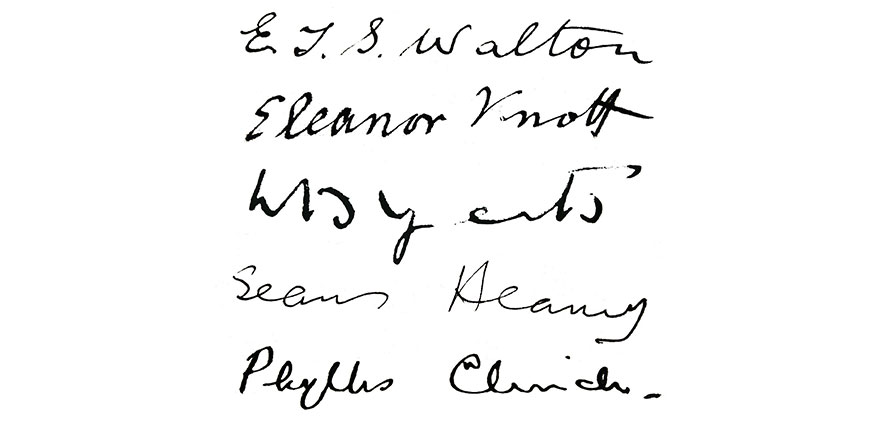 The first pages of the Book consist of a handwritten copy of the Royal Charter given to the Academy by George III, the original of which was signed by him at the Court of St James’s on 28 September 1785. The first meeting of the new Irish Academy took place on 18 April 1785 at the residence of Lord Charlemont, the founding President, on Rutland (Parnell) Square, which is now the Dublin City Hugh Lane Gallery. The Royal Charter grants the Academy the right to make its own Statutes and By-laws.

The Roll Book also has the original Obligation to which Members subscribed in 1785, the first paragraph of which is still in use today. The second paragraph, in which each Member promised that he, his heirs and executors would pay to the Treasurer of the Academy the sum of two pounds five shillings and six pence every year, was eliminated in 1873.

The Roll Book also contains a note signed by Albert, Prince of Wales, on 21 April 1868 when he visited Academy House as an Honorary Member, to view the Academy’s museum in the company of Oscar Wilde’s father, William Wilde, also a Member of this Academy.

The original founding Members of the Academy numbered 88, and they are all listed in the Charter. Today, the Roll Book holds the names of over 2,500 Members. The first women Members were elected in 1949.