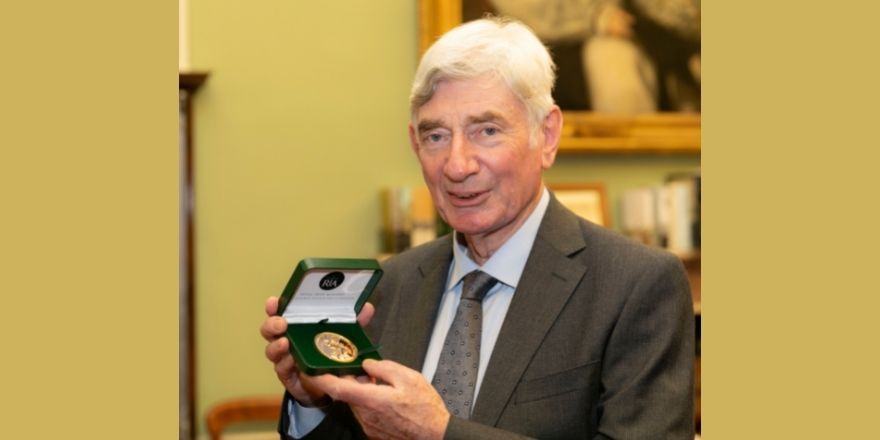 Nicholas Canny MRIA, is emeritus professor of History and Founding Director of the Moore Institute for Research in the Humanities and Social Studies at NUI Galway

My publishing interest as a historian has, throughout my working life, extended over an extensive area geographically and chronologically, as I tried to comprehend how Europeans interacted with populations in other parts of the globe with whom they came into contact for the first time during the sixteenth and seventeenth century. This concern, like that of D.B. Quinn MRIA, of the previous generation, was ignited by an initial interest in England’s involvement with Ireland during those same centuries. My first book, The Elizabethan conquest of Ireland: a pattern established, 1565–76 (Harvester Press, 1976), was on this subject and had been considerably inspired by D.B. Quinn’s The Elizabethans and the Irish (Cornell University Press, 1966). During the following decades, when I was principally involved with undergraduate teaching in Galway, I tried to intersperse publications on Irish history with those on broader topics, even if the more influential of these were associated with collections that I edited. Among these are Europeans on the move: studies on European migration, 1500–1800 (Oxford University Press, 1994), the first volume of the Oxford history of the British empire (Oxford University Press, 1998) and the Oxford handbook of the Atlantic world, 1450–1850 (Oxford University Press, 2011). When I published Making Ireland British, 1580–1650 (Oxford University Press, 2001), I intended it to be my last comprehensive statement on Irish history, after which I undertook research on a book devoted to a comparison between English and French exploitation of the resources of the West Indies during the early modern centuries. Although I published two papers on this topic, one of them as the Raleigh Lecture to the British Academy for 2011, I failed to bring the promised book to completion, principally because I was distracted by heavy administrative commitments. One of these was the term I served as president of this Academy, in 2008–11.

As a result, when the commissioning history editor of Oxford University Press enquired in 2015 when she might expect copy of the promised book, I had to explain to her not only that I had been distracted from my intended course, but also that I no longer possessed the energy and enthusiasm for the prolonged interludes away from home to work in foreign libraries that the completion of such a book required. Our discussion ended amicably, when I undertook to write instead a book on the variety of ways in which the history of the early modern centuries in Ireland had been investigated and written over time. I began to read for this project straight away and it was my good fortune that I had amassed a substantial body of research material before libraries closed their doors with the onset of the Covid pandemic. This meant that I was able to occupy what might have become idle days of lock-down by writing Imagining Ireland’s pasts: early modern Ireland through the centuries, which was duly published by Oxford University Press on 15 July 2021.

In this book I attempt to show how, over the course of four centuries, authors representing the interests of competing groups in Ireland strove to explain the traumatic events that transformed Irish society during the early modern era. These various authors were usually concerned to convince those for whom they wrote, no less than the historians they considered their rivals, that the future belonged to their group, and that the traumatic past they described had been but a time of trial for their ancestors. The book thus confirms that Ireland’s history has always been a subject of disputation, but it breaks new ground by demonstrating not only that the debates pursued were between men and women who upheld the respective positions of Conqueror or Conquered, Protestant or Catholic, Unionist or Nationalist, but also that authors within each such group argued with each other concerning the nature and meaning of Ireland’s past. I give attention to the vernacular histories composed on competing sides, to the relationships between oral memories and written histories, and to the interconnection in succeeding centuries between histories written by authors who had been exiled from Ireland and the communities who had remained at home.

The chronological structure of the book enables readers who are interested in particular subjects to read about these in isolation. The chronology serves also to illustrate how, through the processes of refuting what had come to be considered accepted wisdom and of introducing fresh evidence and perspectives, authors succeeded, over the course of time, in reducing in number the issues that remained in contention concerning Ireland’s early modern past. It also reveals, however, that the issues over which disputation persisted have never been resolved to the satisfaction of competing parties. This means that Irish people have proven themselves less capable than the populations of most other European countries of reaching an agreed narrative concerning their early modern past.

The book also draws attention to the wealth of historical literature and ideas about Ireland’s early modern past that were consumed avidly by extensive audiences in succeeding centuries. Furthermore, it reveals that several of the ‘fresh insights’ for which credit has been given either to D.B. Quinn or myself had, in fact, been ventilated several centuries previously by authors as disparate as David Rothe in the seventeenth century and Thomas Carte in the eighteenth.