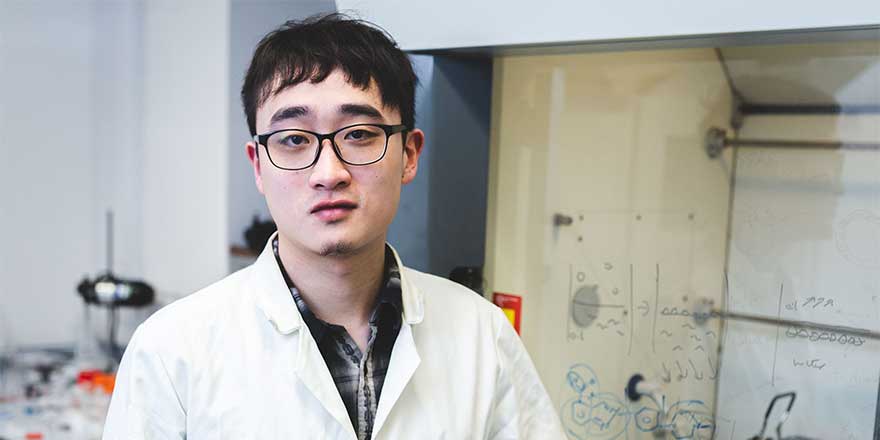 Dr Xu,a recent PhD gradute of the School of Chemistry and Chemical Engineering at Queen’s University Belfast, worked on areas including the development of approaches for surface-enhanced Raman scattering (SERS), and the development of nanoscale polymeric structures.

Yikai Xu’s winning PhD research yielded two ‘platform technologies’ which allow nano materials to move from being purely theoretical, a step closer to having real-life applications. The first platform technology he developed allows nano particles to be assembled at the interface between oil and water into a bulkier form which is therefore easier to see and manipulate. He went on to develop a way to anchor that bulk nanomaterial to a polymer substrate so that it can be handled and shaped.

Such technologies give nanomaterials the potential for a broad range of everyday applications. For example, to detect trace amounts of drugs or explosives on different surfaces such as people hands, or to find and neutralise harmful or cancer-causing chemicals in water. By using different types of nanoparticles as building blocks, these bulk nanomaterials can be built into antimicrobial surfaces, flexible conducting devices and supercapacitors.

Dr Xu described his surprise at being selected for the Kathleen Lonsdale RIA Chemistry Prize:

“It was amazing. Honestly, because it was so amazing I almost didn’t know what to feel…I first heard of the prize in my second year of my PhD, and you know how you need to set goals to keep you going, so frankly I did say to myself, “Okay I’m going to work super hard and I’m going to see if I can actually get this.” That’s also why it was like a dream come true, because it was an actual dream of mine that sort of kept me going.”

“It did mean a lot more to me, not just because it’s a really great personal achievement, but also because it sets a really great example for us as international students coming over to Ireland and what we can achieve. And it shows that as long as you actually put the work in and if you have the chemistry, your game will travel, and Ireland will recognise that, and I think that is really great.”