The Royal Irish Academy library is one of Ireland’s premier research libraries and manages major manuscript, book, pamphlet and drawings collections. It is celebrating the decade of centenaries in a number of ways.

Intellectual life in Ireland, 1910-1920 (Through the Prism of the Royal Irish Academy)

This small exhibition will comprise publications and photographs from the Academy collections displayed in six exhibition cases in the Meeting Room and Reading Room. This exhibition will highlight some key books and periodicals of Irish interest first published in this decade, and will also include photographs of prominent scholars from that decade. Among the academic disciplines covered will be archaeology, history, Irish language and lexicography, literary studies and science.

Rubble, ruins and the grim aftermath of the 1916 rising 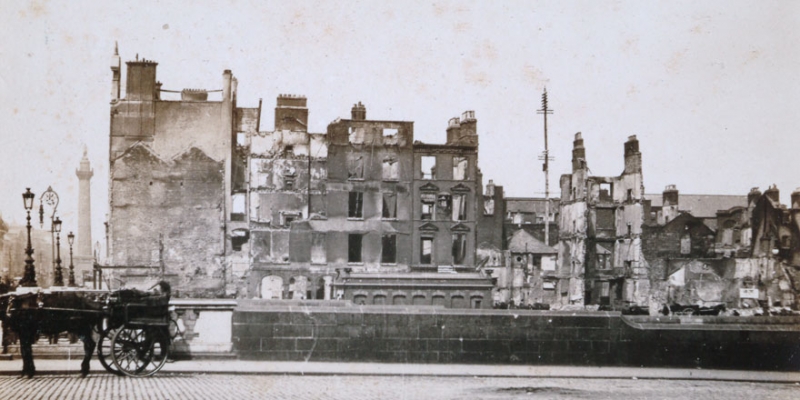 In July 2015, the Digital Repository of Ireland (DRI) collaborated with Siobhán Fitzpatrick at the Royal Irish Academy Library to digitally preserve an exciting collection of photographs of Dublin city centre in the aftermath of the 1916 Rising, taken by antiquarian Thomas Westropp. Although these images had previously been made available online by the Royal Irish Academy, their deposit in the Repository means that for the first time, the digital images are being preserved as carefully as their physical counterparts. This echoes the theme of DRI’s June 2015 DPASSH conference, which reflected on the burning of the Public Records Office in 1922 and considered how our digital heritage could be similarly destroyed if action is not taken.

Westropp’s collection captures the destruction of Dublin’s architectural landscape following a week of fighting, artillery fire and bombardment between Irish rebels and British forces. His pictures show the damage caused to a number of iconic Dublin buildings, including the General Post Office (GPO), which was the rebel headquarters, and depict a number of famous Dublin streets including O’Connell Street, then called Sackville Street, strewn with rubble and glass - the fragments of a rising which changed the course of Irish history.

Westropp’s photographs can now be searched alongside other collections hosted in the Digital Repository of Ireland, allowing rich narratives to be constructed around the events of the period. An article tracing stories of 1916 across digitised objects was written by Dr. Sharon Webb, which references related collections including Maynooth University’s Letters of 1916, NCAD’s Michael Healy Collection, and the Capuchins and the Irish Revolution from the Irish Capuchin Archives. Since the publication of the Westropp collection in the DRI, there has been great media interest with posts from the Irish Times, The Journal, the BBC News website and RTE, amongst others.

For more information on the Digital Repository of Ireland, click here.

To view the Westropp Collection in the Repository, click here.

Here’s a snippet from the recent Irish Times article:

A collection of photographs depicting Dublin in the wake of the 1916 Rising has been released online as part of the newly launched Digital Repository of Ireland.

The 40 photographs, taken by Limerick antiquarian and engineer Thomas Johnson Westropp, show the damage and destruction left by the rebellion and British response.

Taken on May 17th and 18th, 1916, they depict Dubliners going about their daily lives against the backdrop of rubble and ruins. British soldiers stand guard as trams pass the GPO and workers remain focused on the ongoing effort to clean up the city.