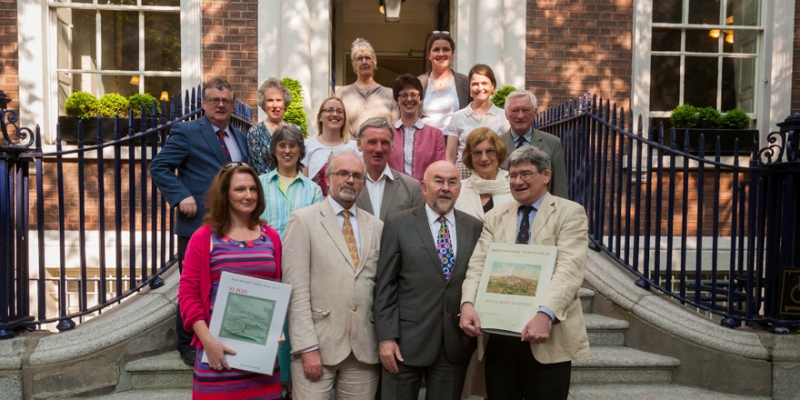 The Irish Historic Towns Atlas (IHTA) project was established in 1981. The aim of the project is to record the topographical development of a selection of Irish towns both large and small. Each town is published separately as a fascicle or folder and includes a series of maps complemented by a detailed text section. The Irish Historic Towns Atlas is part of a wider European scheme, with towns atlases containing broadly similar information available for a number of countries. Thus Irish towns can be studied in their European context.

At an interdisciplinary symposium on 'Irish towns and medieval Europe', organised in 1978 by the Board of Medieval Studies in University College, Dublin, the idea of an Irish historic towns atlas was first publicly discussed following a lecture by Heinz Stoob from Münster on the German towns atlas project. In June 1981 the Council of the Royal Irish Academy agreed to publish the Irish Historic Towns Atlas and establish it as on of its research projects

From the very beginning, it was the aim of the International Commission for the History of Towns that the atlases should have a unified concept and strict guidelines were established to ensure that all volumes would cover common ground. Large-scale town plans constitute the best kind of source material for a comparative analysis of the topography of European towns and therefore feature as a core element in each atlas project. An early nineteenth-century plan at the scale of 1:2500 is produced for each town (map 2); the merit of this map is that it shows the pattern of house-plots before industrialisation/nineteenth-century development. At a smaller scale, maps showing the towns’ surroundings and the modern town plan are produced. Thematic maps and photographic facsimiles of early maps and views are also included. Each atlas is accompanied by an explanatory text and historical gazetteer. The project aims to trace the topographical development of towns and cities.

Towns and cities published to date

The atlas has been planned as a series of fascicles, one for each town in a selection representing various size-categories, various regions of the country from both the Republic of Ireland and Northern Ireland, and various periods of origin, growth and change, with some bias in favour of the medieval period but not excluding estate towns, industrial towns and resort towns characteristic of more modern times. For a full list of published towns and cities please click here.