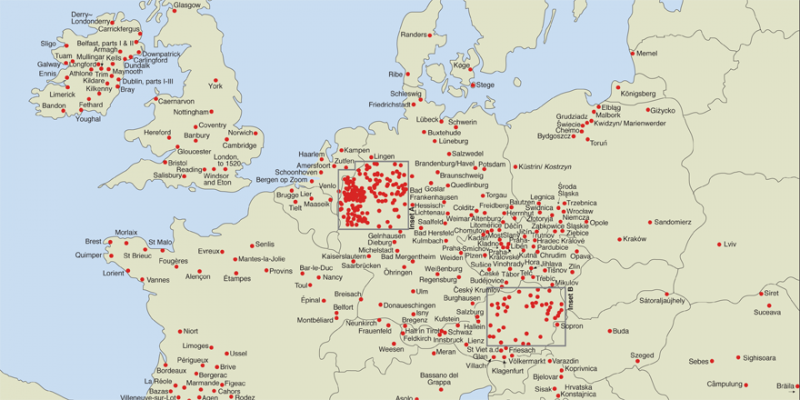 Background information about the European project.

Click here for a high resolution version of the European Project map.

The following is a list of towns atlases published under the scheme laid down by the International Commission for the History of Towns as of July 2014. In order to maintain an up to date list, please inform ihta@ria.ie with any new publications. There is also an interactive map showing the distribution of European Atlases available on the Deutscher Städteatlas.

The International Commission for the History of Towns established the European project of historic towns atlases in 1955 in the spirit of reconciliation in the aftermath of the devastating destruction of European towns during the Second World War. The aim is the publication of a series of national historic towns atlases in order to encourage a better understanding of common European roots by facilitating comparative studies of the topography of pre-modern towns in Europe. Since then atlases of some 500 towns and cities in eighteen European countries have been published.

In order to allow comparative urban studies the atlases needed a unified concept. According to the guidelines the principal map in each atlas is a large-scale (1:2500) representation of the town as it is believed to have stood as close as possible to 1840. A second map shows the town in its mid-nineteenth century setting at 1:50,000. The third map is a modern Ordnance Survey town plan at 1:5000. A selection of facsimile maps is included. An essay explores the topographical development of the town.
(Convenors of the International Working-Group on Historic Towns Atlases: Anngret Simms (Dublin), Ferdinand Opll (Vienna) and Katalin Szende (Budapest), 2010).