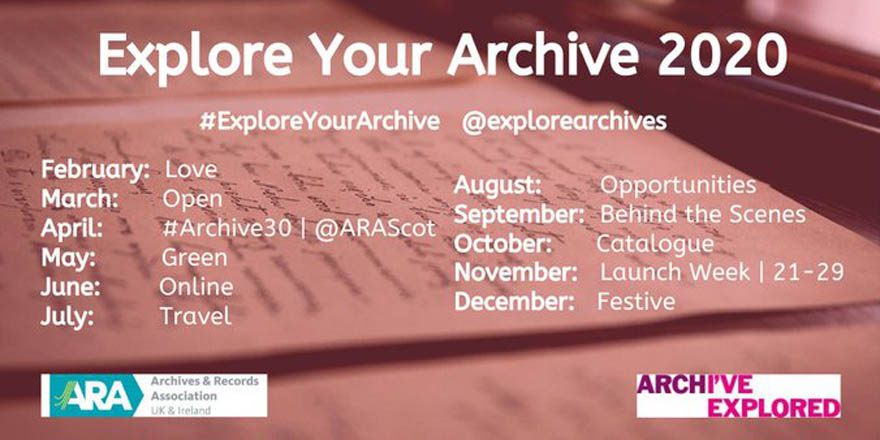 Latest Library Blog post. In November the Library participated in the Explore Your Archive social media campaign, here are some of the collections we highlighted. '

The Library has taken part in the Explore your Archives social media campaign for a number of years and it’s always something we look forward to. It’s a fun way of showing off our collections, allowing us to explore our archives in ways we wouldn’t normally do. The ever-varying themes gives us the opportunity to search and think about our collections in a different way. It’s also interesting to see how other libraries and archives interpret the themes. This year the themes were communication, home, plans, education, labels, science, celebration, health and light. Here are a few of the collections we highlighted this year. For more, look back at the #ExploreYourArchive on Twitter and Instagram.

Do you remember the last time you wrote a letter?

For the theme of communication we looked at one of our largest archive collections, manuscript Ordnance Survey Letters comprising correspondence between John O’Donovan (1806-1861) and other researchers employed on the survey and OS head office staff. The letters reflect the depth and breadth of this extraordinary survey of pre-famine Ireland. Earlier this year we created an interactive story map exhibition on the OS Letters for Dublin, take a look. 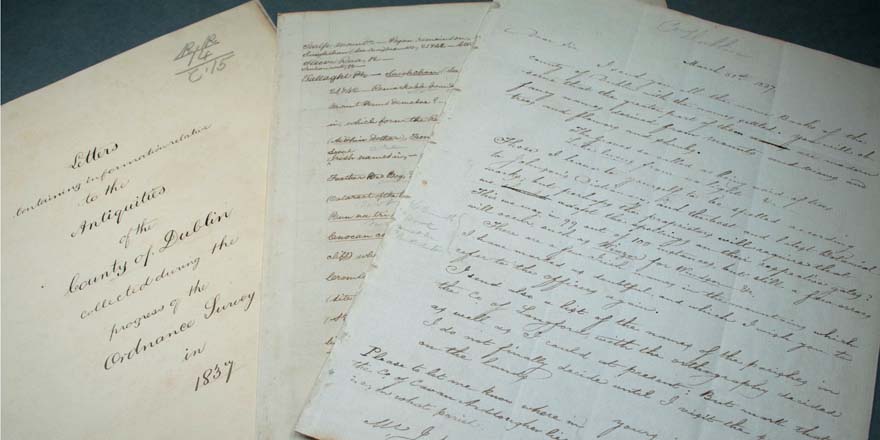 The Library holds other correspondence by John O’Donovan, including this letter to Patrick O’Donovan. Looks like Patrick was a little careless with a candle while reading it! 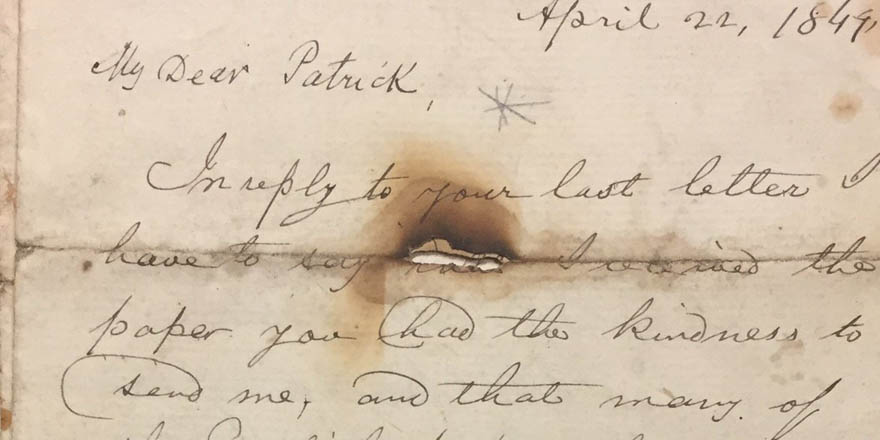 We have all been spending a lot of time at home this year. For this theme we delved into our antiquarian drawings collections. Here is a drawing of the home in which Laurence Sterne was born, Main Street, Clonmel, Co. Tipperary. Drawing by George Du Noyer, 1840. 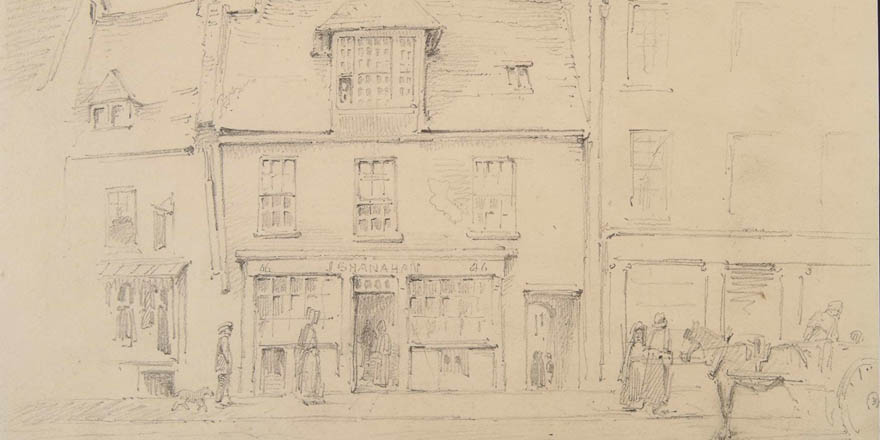 This drawing by John Stokes in 1834, from the Ordnance Survey Memoir collection, depicts the home of Shane Crosach the robber, from an adjacent standing stone, in Carnanreagh, Upper Cumber. 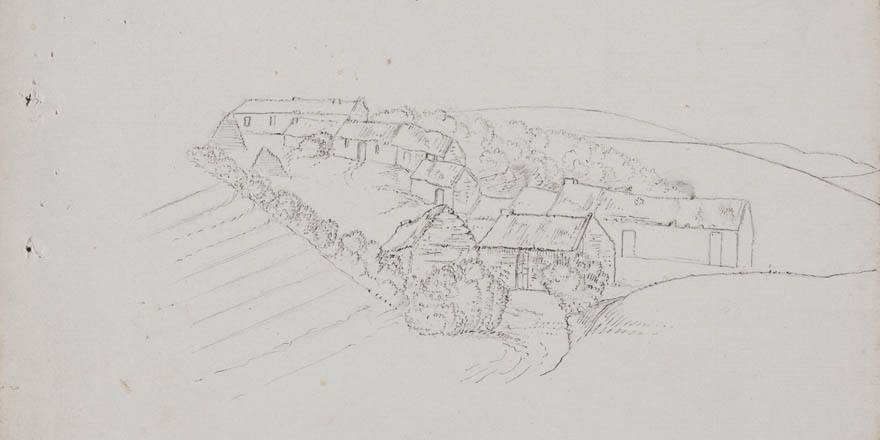 'View of the home of Shane Crosach the robber, from an adjacent standing stone, in Carnanreagh, Upper Cumber.' Drawing by John Stokes, 1834. (OS Memoirs, Box 36, VIII).

This attractive watercolour of “Jemmy the gun's" house, Srahnamanragh, Ballycroy, Co. Mayo by Henry Dryden, 1854. Unfortunately, we don’t have any information on “Jemmy the Gun”, if anybody has details, please get in touch. 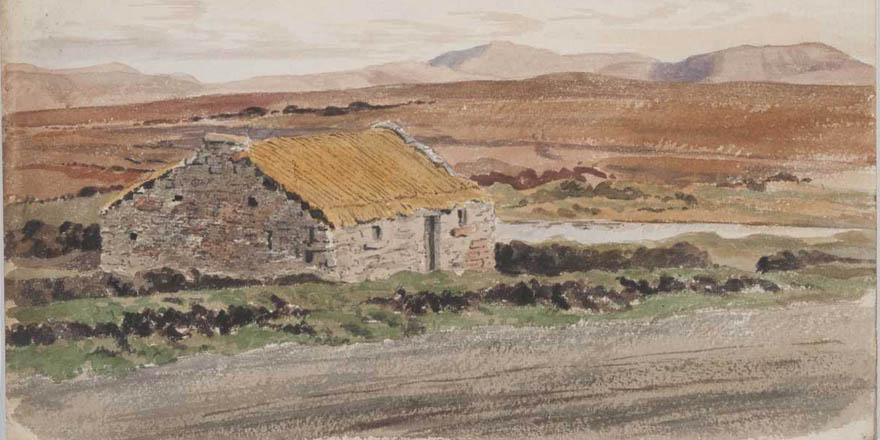 One of the most popular images we posted during the campaign was this photograph by Robert Welch, titled ‘Bringing home the turf,’ This photo is part of the Robert Lloyd Praeger collection. 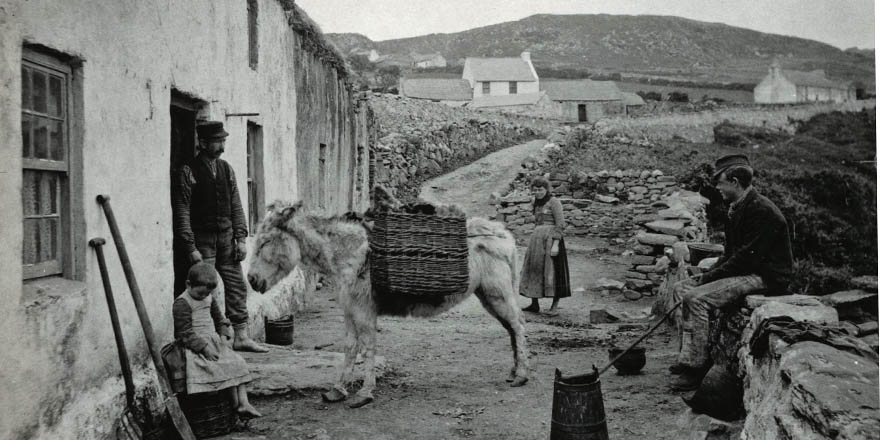 It has been difficult to make plans this year!
For the theme of plans we decided on this neat little plan of the Academy Museum pre-1890, before the artefacts were transferred to the National Museum. The plan shows the visitor flow from the Gallery (now the Reading Room) to the Strong Room (now called the Gold Room). 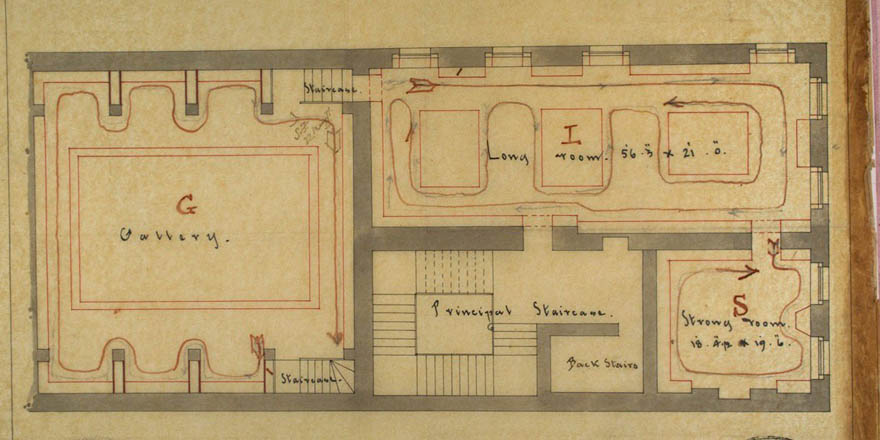 The Library holds a collection of architectural drawings relating to proposed work at Kilkea Castle, Co. Kildare, 1849-50 executed by William Deane Butler for the Duke of Leinster. These drawings have been digitised and are available to view on our online catalogue. 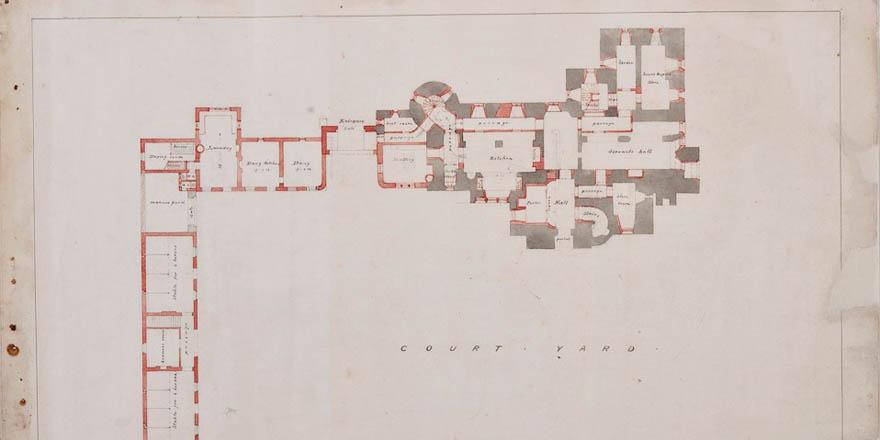 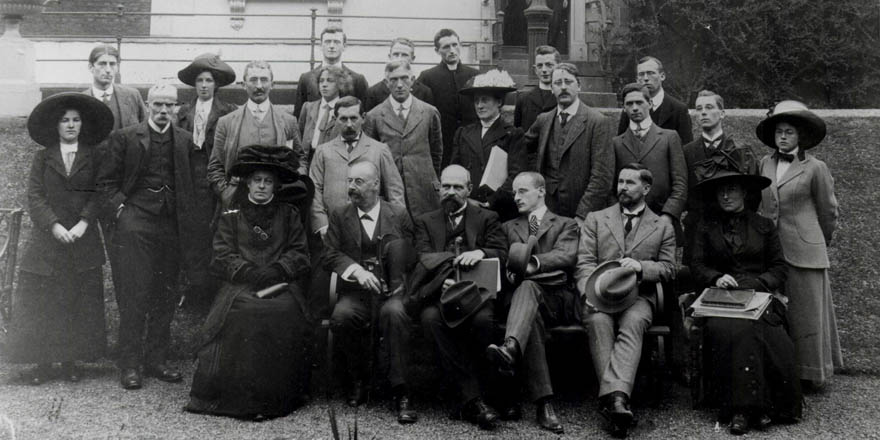 Group photo of students and teachers at the School of Irish Learning, 1911. (Photo Series 6/Box 2).

We posted an interesting image of the Roll Book of the Stephen's Green National School [also known as Damer Mixed National School] from 1895 to 1900. This is from the Dublin Unitarian Church Collection, donated to the Royal Irish Academy in two separate deposits, in 2006 and 2008. 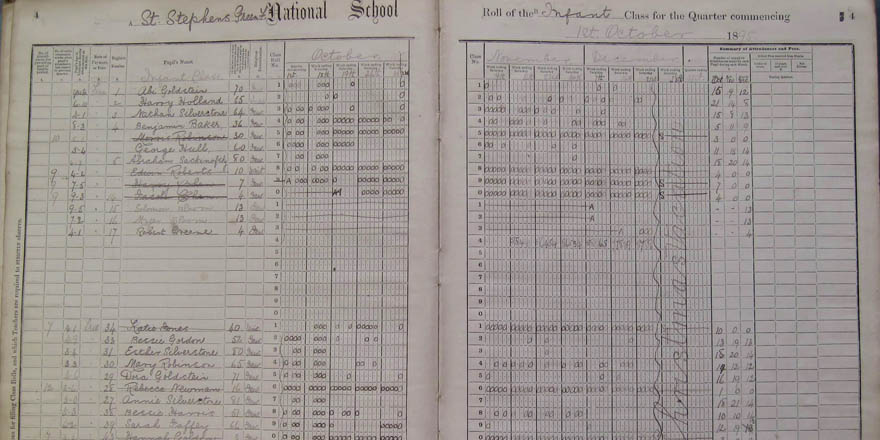 Everything is labelled and classified in a library! One of the most interesting artefact items in the library collections is Cynthia Longfield’s glass insect killing jar wrapped in fragment of sailcloth of sailing vessel, the "St. George". As it has a handwritten label, we thought this would be the perfect chance to show this off. 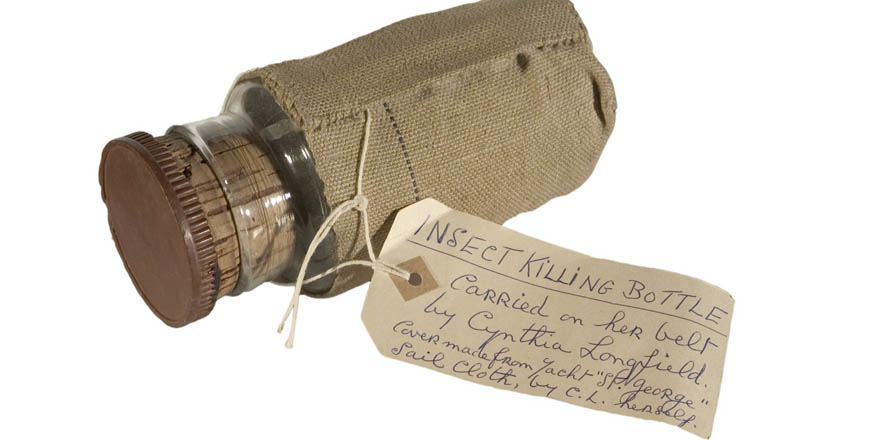 We find a variety of bookplates in books. One of our favourites is this one belonging to Mathew Dorey, we like the sentiments in the quotes used. 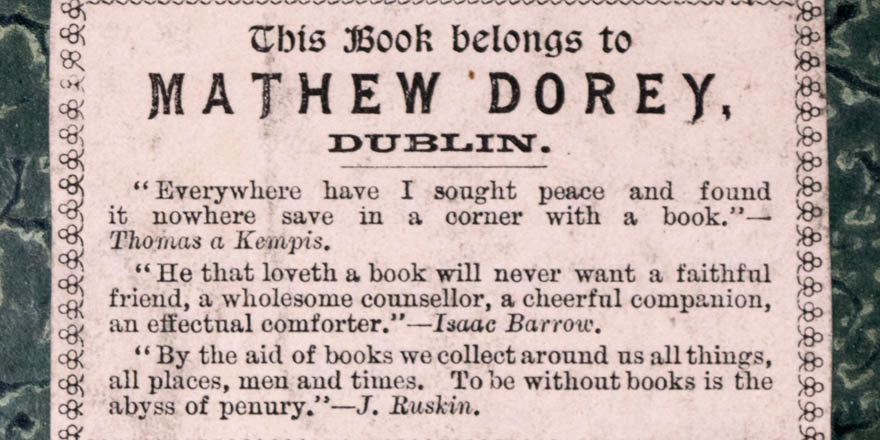 The Royal Irish Academy is an Academy for Science and Humanities, so plenty of collections to choose from for this theme. We decided to look at the Cynthia Longfield collection again, as we thought the images would work well on social media. Cynthia Longfield, 1896-1991, was an Anglo-Irish entomologist. The collection includes an album of  photographs, taken and developed during the St. George Expedition to the South Sea Islands 1924-1925, mainly depicting the people and life on the ship and the flora and fauna of the Pacific Islands. 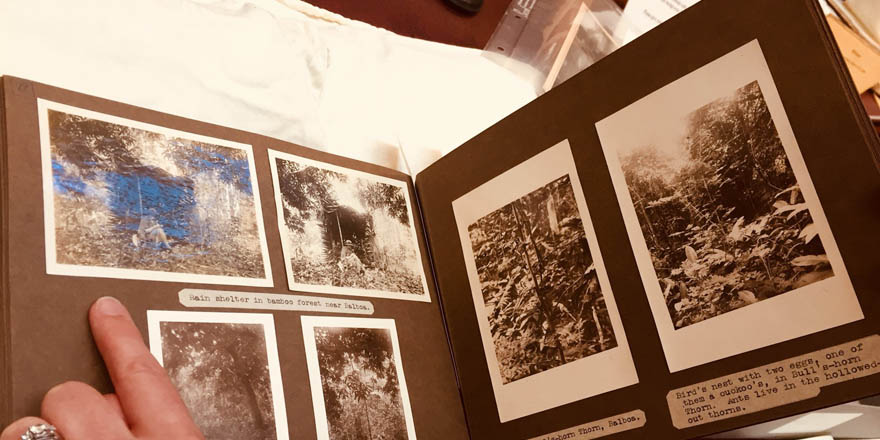 For this theme we couldn’t not mention Mary Somerville – ‘queen of nineteenth-century science’. Somerville was an Honorary Member of the Academy and features in our online exhibition ‘Prodigies of learning: Academy women in the nineteenth century'.

Celebrate your archives, come on! For the theme of celebration we turned to the Wilmot-Dashkova Collection which gives a bird’s eye view of life at court and on a Russian country estate, and for records of society in France, Italy and Russia in the early 19th century, the Wilmot-Dashkova papers are a mine of information. The collection includes ‘An account of the celebrations at the wedding of His Majesty and Grand Duke Tsar Mikhail Fyodorovich, exactly copied from an ancient manuscript' containing some lovely watercolours. 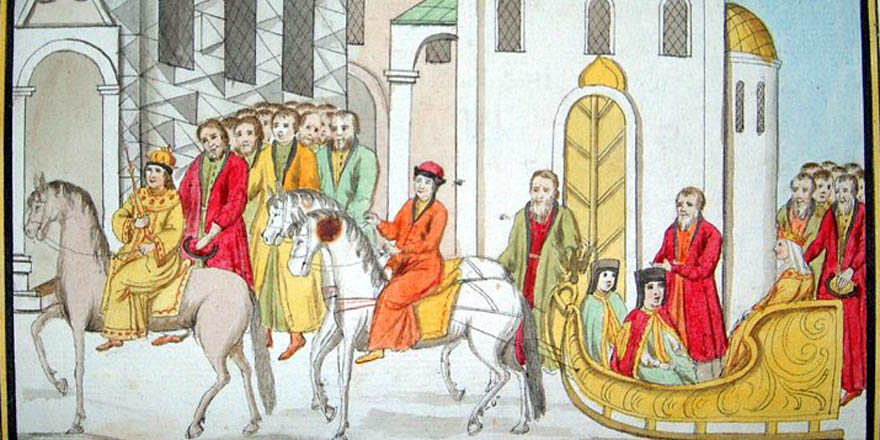 An account of the celebrations at the wedding of His Majesty and Grand Duke Tsar Mikhail Fyodorovich, exactly copied from an ancient manuscript, which is preserved in the library of the Imperial College of Foreign Affairs in the archives of Moscow. (RIA ME 12 L 16).

We also posted this beautifully illustrated Address to Rev. Nicholas Donnelly DD, Lord Bishop of Canea, Parish Priest of St Mary’s, Haddington Road, Dublin on the occasion of the silver jubilee of his episcopal consecration. [Dublin, 1908]. The artist, Mary Fitzpatrick (1860?-1937), features in our online exhibition ‘Creative women of Ireland.’ Illuminated addresses are highly decorative manuscript pieces commissioned for special occasions, such as commemorations, ceremonies, retirements and dedications. Addresses were popular in the late C19th early C20th. 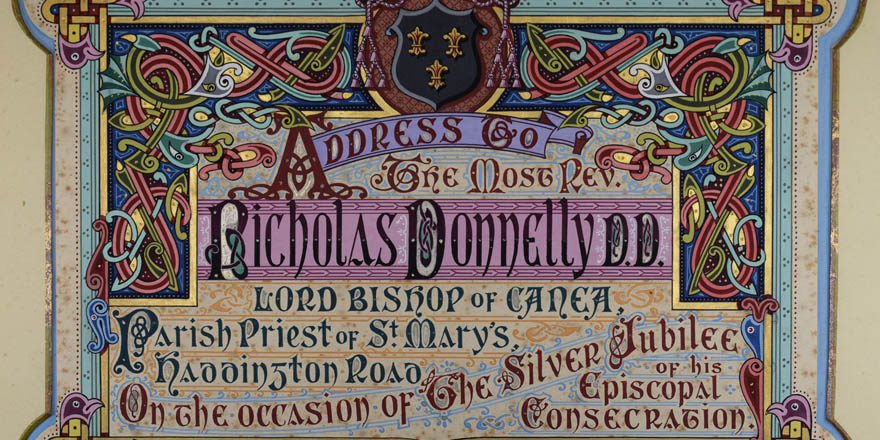 Address to the Most Rev. Nicholas Donnelly DD, Lord Bishop of Canea, Parish Priest of St Mary's, Haddington Road [Dublin] on the occasion of the silver jubilee of his episcopal consecration. By Mary Fitzpatrick (1860?-1937). (RIA MS 4 B 53).

Health is on all our minds more than ever this year. Did you know the Library holds the largest collection of medieval manuscripts containing medical texts in Irish. For Explore Your Archive we re-formatted our exhibition ‘Gaelic Medical Manuscripts’ into an online medium. This exhibition aims to highlight a lesser known aspect of medieval Irish society and the range of medical learning. Of course, we couldn’t leave out a special mention of one of our best known manuscripts The Book of O’Lees. This is an iconic medieval medical text translated into Irish from a Latin version of an Arabic text. Its format is unique in the Irish canon and its history is both colourful and dramatic. For more on the story read our post ‘The mythical Island of Hy Brasil and the Book of O’Lees.’ 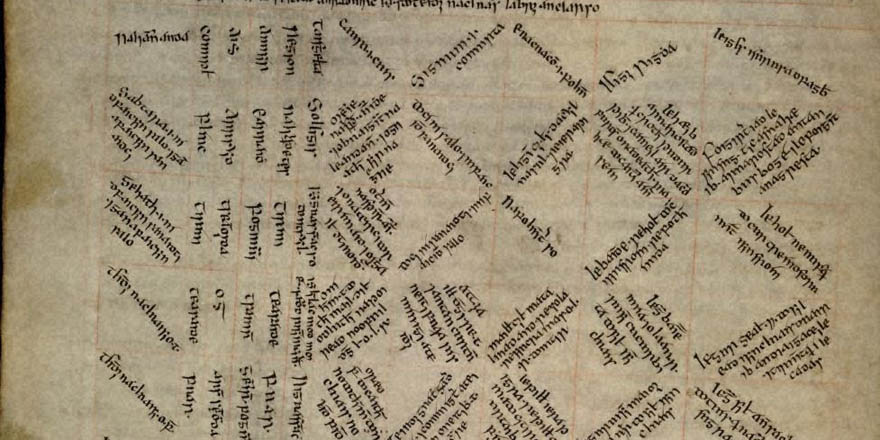 For the final day of the campaign we were asked to post items relating to light. Thomas J. Westropp's sketchbooks contain a large number of drawings he classes as 'camera sketches'. These were most likely created using a camera lucida, an optical drawing aid popular with artists at the time. A camera lucida is a simple portable device involving a prism on an extendable stand or stick. The prism reflects the view of a scene in front of the artist and reflects it onto the drawing surface, which can then be traced over. Ideal for the artist in the field. 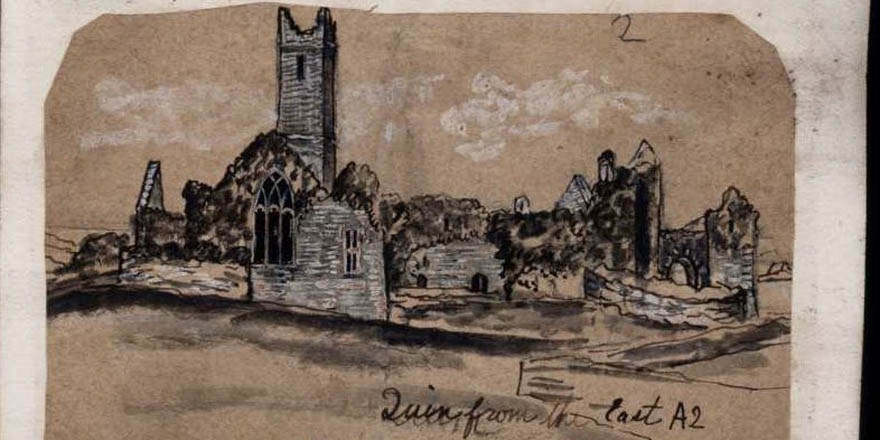 Not officially ‘archives’ but we love the lights in the Meeting Room and wanted to show them off. Here’s a little video on the history of this magnificent room (You may recognise it from the Late Late Toy Show last Friday!).

A big thank you to the organisers of Explore your Archives. See you again next year!