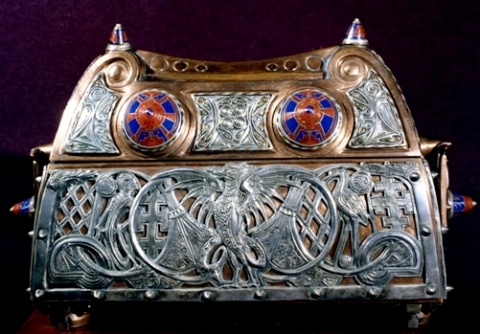 The Senate Casket was commissioned in 1924 by historian and senator, Alice Stopford Green, 1847-1929, as a gift to the first Senate of the Irish Free State. Stopford Green intended that the Casket should hold a vellum roll containing the signature of every member of the first Irish Seanad and that it should be placed on the Chairman’s desk in the chamber for the duration of each session. The casket was executed by Miss Mia Cranwill,1880-1972, an artist who specialised in metalwork of the highest quality. It was presented to the Seanad on 26 November 1924. Mrs Green was unable to be present on the occasion due to ill health. Her presentation speech was read ―
‘Senators will agree that we should place no emblem before us in this Assembly that is not of Ireland, in spirit and in workmanship, carrying in it the faith both of the Old Irish world and of the New. I have insisted, therefore, that the form of the casket should go back in direct descent to the ‘shrines’ designed by the Irish over a thousand years ago. The artist has magnificently proved the power of that spiritual inheritance which has been bequeathed to us from an Old Ireland: and has shown that a really living art has no need to copy in slavish routine, and can to-day be as free and original and distinguished as in the times of ancient renown, supposed to have been lost.
Thus the shrine in its intense vitality carries to us its own message. That if we want to revive here an Irish nation we must dig our roots deep into its soil, and be nourished by that ancient earth. In Old Ireland, a land of many peoples, it was not privileges of race that united Irishmen in one country and under one law. It was a common loyalty to the land that bore them…’
The Senate ensured that Green’s presentation speech was inscribed on vellum. This work was executed by George Atkinson, RHA, head of the Dublin Metropolitan School of Art. The scroll was enclosed in an ornamental silver band, also made by the Metropolitan School of Art. The dedicatory scroll and the roll of signatures were intended to be held in the casket itself.
The Casket’s design was inspired by Gallarus Oratory, Co. Kerry. It was made of ‘Norwegian copper, overlaid with pierced and repoussé silver panels with top panels of filigree silver and gold, ornamented with four large conical panels in blue, vermilion and brick colour cloisonné enamel. Cones of similar type appear on the handles and on the ridge, and the same shape was repeated in the metal rivets. The four feet were fashioned in the form of rings which turn down and lock into an upright position so that the casket could be carried ceremonially on poles in the manner of early shrines: otherwise they rested on a plain stand made of Irish yew’.

In 1964, Miss Cranwill wrote a comprehensive piece explaining the imagery used on the casket ―
‘To connect for ever the gift with the giver, the armorial bearings of the Stopford family were used… and the crest is the water wyvern. The wyvern typifies the donor who here turns towards a figure in decoratively-translated 20th-century morning dress ― (complete down to his spats!) ― who represents the recipient senators. She appears to be bringing the crane… to the notice of the senators. The maker’s signature is between the feet of the crane.

In succeeding years, this, should the individual meaning be lost, might be understood to mean Patronage introducing Art to the people. Under the outspread wings of the wyvern are seen groups of heads in linear treatment: these are other government officials… Below these are seen two queer little winged things out of the wyvern world. One hears ‘thoughts are things’, and these must be wyvern thoughts on the wing, to settle in the minds of other senators or T.D.s and whisper that they also might give a gift of Art to the nation! The right and left corners of this face are occupied by two of the Sidheoga!

Do you see the self-satisfied smirk on the face and attitude of that on the right and the dejected bearing of the other? The former is from Tír Conaill where the maker began to formulate the designs and out of the loveliness and faery of that wonderful land and sea and sky came the fantasy of it. Baile Atha Cliath, on the left did not so inspire the design!’…

The reverse of the Casket consists of three figures symbolising Body, Mind and Estate, underneath which is a mythical, horned beast, symbolising the way in which each class and order in this materialistic age seems forced to prey upon each other. The beast is counterbalanced by a winged figure of light. Other faery figures and representations complete the tableau. As explained by Wendy Kaplan ‘Celtic imagery was freely adapted to represent the hopes of the Irish Free State as well as its anxieties’.

The Senate Casket was presented to the Royal Irish Academy in 1936 by resolution of the Senate at its last meeting (19 May) prior to its dissolution .

The Casket was displayed in: