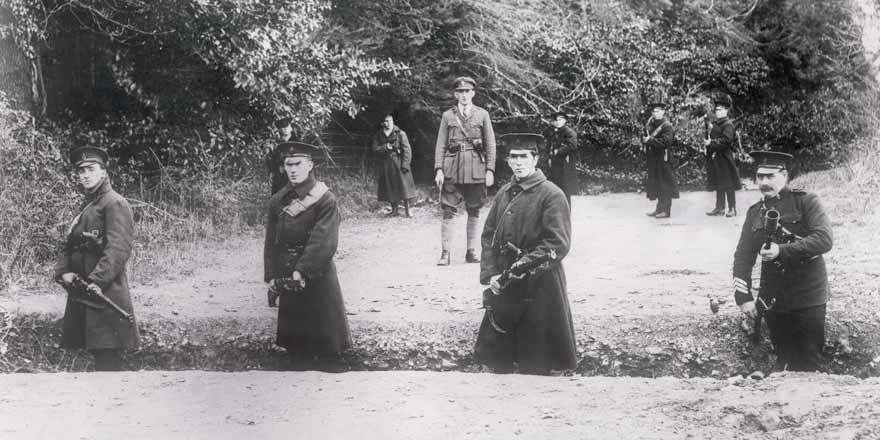 Read Peter Leary​'s essay on 'Friction on the Frontier' on Century Ireland.

In collaboration with Century Ireland, we are making the 50 essays freely available online. Today's essay is by Peter Leary and it deals with trenches being dug in country roads and with local people filling them in, a to and fro that started on 3 March 1922:

"At 11 p.m. on Friday, 3 March 1922, a party of B-Specials (a section of the Ulster Special Constabulary) opened a trench across the road at Gortineddan—a townland between Derrylin in County Fermanagh and Ballyconnell, County Cavan—severing motor access between Northern Ireland and the south. It was ‘filled’ the following day by local people but was reopened by A-Specials that night.¹ This was only the beginning. Over the course of that weekend, and in the weeks that followed, numerous attempts to seal the border were reported. Saturday saw three roads ‘cut’ near Clones, County Monaghan, blocking off the market town aimportant railway junction, both from Newtownbutler in Fermanagh and from access to the Cavan villages of Redhills and Belturbet, via routes that passed through Northern Ireland on the way. On Monday, 6 March two bridges near Swanlinbar, County Cavan—one leading to Derrylin, the other to Enniskillen—were destroyed by a combined force of A and B Specials. When the latter bridge was partially repaired by local farmers ‘to get their stock and goods across’, a group of A-Specials tore it down again." Continue reading (you will be redirected to the website of Century Ireland)