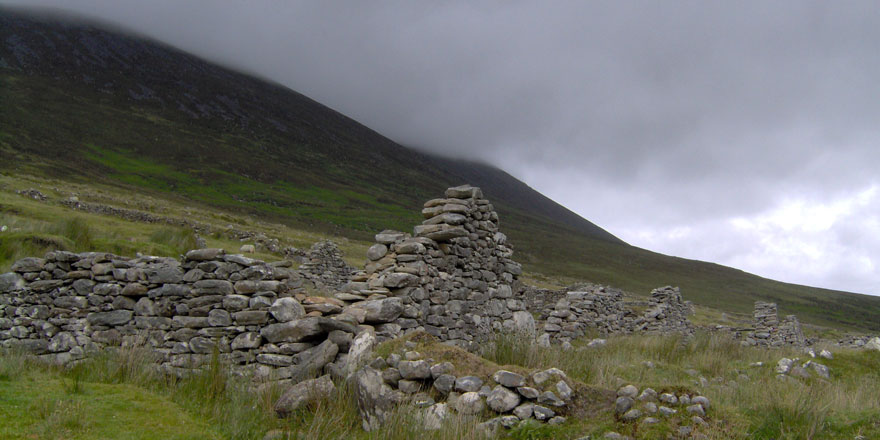 In his quirky, incisive account of life on Achill, Heinrich Böll celebrated the consoling power of a simple life on the edge of Europe.

Catch up on the Modern Ireland in 100 Artworks series here

A great irony hangs over the Irisches Tagebuch, or Irish Journal, of the German novelist Heinrich Böll. As mass emigration reached critical levels, Böll reinvented Ireland not as a place to escape from but as a place to escape to. Especially in Germany, Böll’s brilliant, quirky, incisive account of his long stays on Achill Island from 1954 onwards positioned Ireland as western Europe’s great elsewhere.

“Sitting here by the fire,” he wrote, “it is possible to play truant from Europe, while Moscow has lain in darkness for the past four hours, Berlin for two, even Dublin for half an hour: there is still a clear light over the sea, and the Atlantic persistently carries away piece by piece the Western bastion of Europe; rocks fall into the sea, soundlessly the bog streams carry the dark European soil out into the Atlantic; over the years, gently plashing, they smuggle whole fields out into the open sea, crumb by crumb.”

Learn more about Boll in his Dictionary of Irish Biography entry.

Böll, Heinrich Theodor (1917–85), writer, was born 21 December 1917 in Cologne, Germany, the youngest of eight children (two died in infancy) of Viktor Böll, a master joiner specialising in woodcarvings for churches, and Maria Böll (née Hermanns). The family was catholic, interested in politics and very close-knit. Following the economic crisis in 1929 they often experienced financial problems which led the family to move house around Cologne several times during Böll's childhood. After attending the elementary school in Cologne-Raderthal he went to the Kaiser Wilhelm Gymnasium, a prestigious grammar school in Cologne where he obtained his Abitur(leaving certificate) in 1937.

Following an unfinished apprenticeship as a bookseller he participated in the compulsory labour service in 1938, a prerequisite at the time to be able to enrol at the University of Cologne, where he started studying German and classics before being called up for military service in the autumn of 1939. Böll served mainly in Poland and France; in the later war years he was also in the Soviet Union. He remained a simple soldier as he felt it would be a betrayal to become an officer. Following an extended stay in a military hospital in Debrecen due to injury and fevers in the summer of 1944, he managed to obtain counterfeit documents and spent most of the remaining war avoiding being drafted into the army again. He was taken prisoner of war in April 1945 by American soldiers and was released due to his poor health in September 1945, 'free after nearly seven years'.

Böll returned to his young family. In March 1942 he had married Annemarie Cech, who had been part of the circle of friends of the Böll family for many years. Seven years older than Böll, she had studied English and German at university together with Böll's sister Mechthild. After her studies, in 1935 she went as an au pair for a year to Upton Hall in the Wirral, near Liverpool, a private catholic boarding school run by a society of nuns, the Faithful Companions of Jesus, where she became close friends with an Irish sports teacher, Mary Kelleher. Annemarie returned to Germany to look after her grandmother who had brought her up following the early death of her parents. She eventually obtained a teaching position at the Mittelschule Rothgerberbach, a secondary school in Cologne where she taught German, English and gymnastics. Annemarie and Heinrich Böll shared a deep religious belief and a love for literature. From early on she was the first reader of his writings. His letters from the war (Briefe aus dem Krieg 1933–1945, 2 vols, 2001) to his family, but predominantly to her, give insights into the life of an ordinary soldier with a keen ability for sketching his surroundings, his horror at the cruelty and insanity of war, and the central role Annemarie played in his life. Their first son, Christoph, born in July 1945, died in infancy in October of the same year. Heinrich's and Annemarie's other children were born in 1947 (Raimund), 1948 (René) and 1950 (Vincent). The first years after the war were difficult for the growing family, supported mainly by Annemarie's income as a secondary-school teacher.

Heinrich Böll's experiences in the army became the subject of his first published short stories from 1947 onwards. A first collection appeared three years later, Wanderer, kommst du nach Spa… (1950; Traveller, if you come to Spa), in which he wrote against the inhumanity of war. Other topics in the next years included the survival of ordinary people caught in difficult circumstances and their struggle with surrounding hypocrisy and superficial morals.

In 1951 his first novel, Wo warst du, Adam? (Where art thou, Adam?), appeared, and Böll received the Gruppe (Group) 47 Prize for his story 'Die schwarzen schafe' ('Black sheep'). In the immediate post-war era, Gruppe 47 was an influential association of writers and critics of contemporary German literature. For Heinrich Böll it was the long-hoped-for break that allowed him to concentrate on writing full time. His output in the following years was prolific and led to his becoming one of the best-known German authors of the mid 1950s for his short stories, radio plays, and especially his novels. Und sagte kein einziges Wort (Acquainted with the night / Never said a word), came out in 1953, followed by Haus ohne Hüter (1954; Tomorrow and yesterday) and Billard um halb zehn (1959; Billiards at half past nine). In nearly all of Böll's works one can find a strong element of religion; however, he became increasingly critical of the catholic church in Germany, particularly in Ansichten eines Clowns (1963; The clown). Most of his works deal with contemporary German issues important at the time of publication and therefore give a guide to post-war German history, with critical reflections on German politics and society.

Böll had a strong relationship with Ireland, which he first visited in 1954. A collection of his impressions of the country, Irisches Tagebuch (Irish journal), appeared in 1957, becoming one of the most influential German books on Ireland and remaining a bestseller. In childhood Böll had enjoyed Irish fairy tales and later he discovered Irish writers such as Jonathan Swift (qv), Francis Stuart (qv) and Brendan Behan (qv). Together with Annemarie (who in fact did most of the work), he translated a number of the works of Behan, Eilís Dillon (qv) andGeorge Bernard Shaw (qv), as well as The playboy of the western world by John Millington Synge (qv), An tOileánach (The Islandman) by Tomás Ó Criomhthain (qv), and The hard life of Flann O'Brien (qv). Especially in the second part of the 1950s and the 1960s, the Böll family spent a lot of time on Achill Island, Co. Mayo, where they acquired a cottage in Dugort in 1958. Achill also featured strongly in a film, Irland und seine Kinder, that Böll made about Ireland in 1959, which was very favourably reviewed in Germany but caused a mixed response in Ireland when it was broadcast in 1965 as Children of Eire. In 1967 the English translation of Irisches Tagebuchappeared as Irish journal, translated by Leila Vennewitz. Böll added an epilogue and a foreword pointing out that the Ireland described in the book was that of the mid 1950s and that his comments on the 'great changes' since were contained in the epilogue; it can be argued that he included these additions to avoid similar criticism to what he had received after the broadcast of the film.

In 1972 Böll was awarded the Nobel prize for literature. Shortly afterwards, in 1973, he received an honorary doctorate from TCD. Others came from Aston University, Birmingham, and Brunel University, Uxbridge, London. He was president of the German PEN, and, at the thirty-eighth meeting of the International PEN, in Dún Laoghaire in 1971, was elected its president as well (until 1974). Nationally and internationally Böll was acknowledged as one of the principal German writers during the four decades after the second world war. For many people outside his home country he embodied 'the other Germany', one that people could trust again after fascism. He was seen as the literary conscience of the Federal Republic of Germany (an assessment with which he always disagreed), someone for whom morality and aesthetics were congruent. However, his relationship with Germany became fraught, particularly in the aftermath of an article he published in the context of the debate on terrorism and the general unease in Germany in the early 1970s. While Böll never approved of or supported the violent means adopted by the Red Army Faction (RAF) in their fight against the system and the institutions of the Federal Republic of Germany, he was outspoken against the prejudices of the gutter press. His retaliation to attacks, especially from the Springer press, came in the form of his book Die verlorene Ehre der Katharina Blum(1974; The lost honour of Katharina Blum), which attacked tabloid journalism. Other late works include Frauen vor Flußlandschaft (1985; Women in a river landscape). Posthumous publications include the early post-war novel Der Engel schwieg (1992; The silent angel), the pre- and early post-war stories Der blasse Hund (1995;The mad dog), and his earliest post-war novel, Kreuz ohne Liebe (2002; 'Cross without love').

Heinrich Böll died on 16 July 1985 at his house in Langenbroich (Eifel), Germany. A Heinrich Böll Foundation was established in 1987; following a merger with other foundations, in 1996 it became the foundation supported by the Green Party in Germany. A Heinrich Böll archive is situated at the City Library in Cologne. Between 2002 and 2010 a twenty-seven volume 'Kölner Ausgabe' (Cologne Edition) of his works appeared. Böll's papers were loaned to and later acquired by the City of Cologne in 1979 and 1984, and placed in Historical Archives in Cologne. Additionally, most private family papers were bought in early 2009. Unfortunately, most of them were directly affected by the collapse of the archive just weeks later. Restoration of what has been salvaged is expected to take decades.

In Ireland, Achill Island remains the focus point for memories of Heinrich Böll. The cottage there was eventually sold after Böll's death and is now a residence for Irish and international artists and writers, run by the local Heinrich Böll Association. Many Irish writers have stayed there and some have written about it, notably Hugo Hamilton (who published Die redselige Insel ('The island of talking: an Irish journal fifty years after Heinrich Böll') in 2007) and Claire Keegan. An annual Heinrich Böll weekend is also organised by the association, with readings by Irish and German writers, guided walks and local themes dominant, as an ongoing legacy of Böll's time in Ireland, which amounted to several years altogether. As he wrote shortly before his death, the country remained close to his heart always.