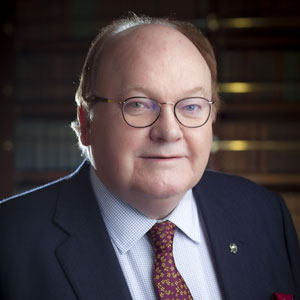 Professor Gerry McKenna DL, MRIA, [BSc(UU 1976), PhD(QUB 1979), DSc(hc NUI), LLD(hc QUB). FRSB, CBiol, FIBMS, FRSA] is a former Dean of Science, Pro Vice Chancellor (Research) and Vice Chancellor and President of Ulster University. He is an internationally distinguished researcher in the areas of DNA repair and mutagenesis. He served as the founding chair of Universities Ireland, and is the co-founder of the Heads of University Centres of Biomedical Sciences (HUCBMS), the US-Ireland R&D Partnership, the Irish Universities Nutrition Alliance (IUNA) and the Northern Ireland Science Park. Professor McKenna is the lead author of a number of the Royal Irish Academy's Advice Papers including: 'The Sustainability of the Northern Ireland Higher Education Sector', and the Academy's submission to a UK House of Commons Select Committee on Science and Technology Inquiry: Leaving the EU: Implications and Opportunities for Science and Research. He chaired the Academy's Higher Education Futures Taskforce which produced a series of 5 reports in 2021. He is a co-founder of the Celtic Academies Alliance comprised of the RIA, Royal Society of Edinburgh and Learned Society of Wales. Professor McKenna is Senior Vice President of the RIA, a Member of the Academy's Council, and chairs the Academy's North-South Standing Committee.