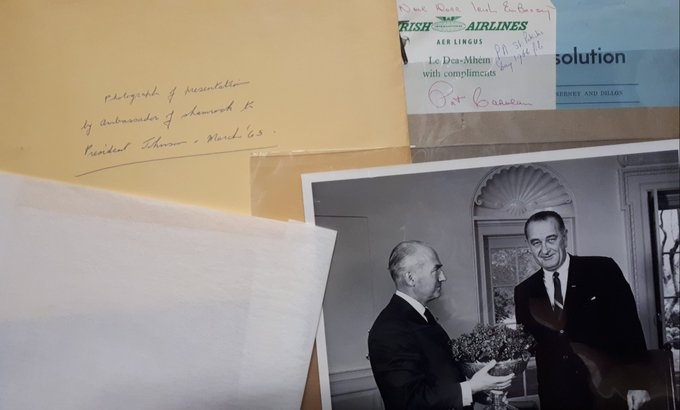 While working through the archives for what became DIFP Volume XII we came across the photograph pictured above.

While conducting the research for DIFP Volume XII we came across the photograph pictured above in the Department of Foreign Affairs ccollection retained in the National Archives. Originally wrapped in tissue paper (and now stored safely in a mylar sheath), it almost certainly had been filed away unseen since it was taken in 1965.

It is a picture of US President Lyndon B. Johnson receiving the customary bowl of shamrock on St Patrick’s Day, 17 March 1965, from the recently appointed Irish ambassador to the United States, William P. Fay. The volumes in the DIFP series do not, as a rule, include photographs, and while the 'Shamrock ceremony' in the White House was cancelled in 2020 and 2021 due to the COVID-19 pandemic, we looked back through the files in the National Archives to see what we could match to a photo of the event from 1965.

Bowls of shamrock were intermittently presented to sitting US presidents at the White House from 1952, a tradition started by John J. Hearne, the then-Irish ambassador. The shamrock was, in this period, almost always presented by the incumbent ambassador; in this case, Fay, who had held a number of senior appointments at home and abroad, including as ambassador to France and Canada, before being appointed as Ireland’s seventh ambassador to the US in 1964, during the presidency of Lyndon B. Johnson.

After Johnson succeeded the assassinated John F. Kennedy in 1963, Fay’s predecessor, Thomas J, Kiernan, informed his superiors in Dublin that ‘President Johnson’s attitude to Ireland and the Irish will be warm and friendly, certainly in 1964, but of course without depth of feeling’. Fay devoted a good deal of attention to St Patrick’s Day while based in Ottowa, and this did not change after his move to Washington.

His account of 17 March 1965 in the US capital that he sent back to his superiors in Dublin was quite comprehensive (though for reasons of space it did not, alas, make it into the final volume). Fay was under no illusion that it was a distinctively American phenomenon as much (if not more) than an Irish one, as he noted its importance to Irish American politicians in terms of harnessing electoral support. As ambassador he was inevitably in demand to address various Irish-American functions in US cities with significant Irish communities and had attended functions in Boston on the days prior to 17 March.

Returning to Washington, on St Patrick’s Day itself he was interviewed by NBC and attended High Mass in St Patrick’s Church, during which the sermon, preached by a Monsignor O’Higgins, ‘endeavoured to reconstruct the Patrick known to modern scholarship (insofar as he was known!) mainly out of the Confessio and the Epistolia’, and, in a striking reflection of events in the contemporary US, the monsignor, according to Fay, ‘did not fail to align the Saint on the side of full and equal citizenship for the Negro’.

Later that evening another function was held by the friendly Sons of St Patrick, attended by the great and the good, but from Fay's perspective ‘the most important aspect of our political activities on the occasion of the national feast day’ came immediately after mass: the customary visit to the President at the White House. Along with the shamrock and Waterford Crystal bowl, Fay presented Johnson with ‘an inscribed edition’ of Ludwig Bieler’s Ireland: Harbinger of the middle ages, for Johnson’s wife Claudia (‘Lady Bird’). It was a brief encounter, consisting of little more than pleasantries, but one piece of business arose that Fay felt compelled to comment on separately:  Johnson clarified that the newly appointed US ambassador to Dublin, Raymond R. Guest,  was ‘a little deaf in one ear’, which is why Johnson felt he had made a mistaken reply to a question asked him during his recent confirmation hearing. ‘It was obvious that the president had it in the front of his mind that the Irish government may not have been favourably impressed with the nominee on account of his apparent lack of knowledge of Irish affairs’ (as it happened, Guest owned a large stud farm outside Dublin). The brief encounter came to an end, and the photograph above was forwarded to the Irish embassy.

Johnson's apparent concern not to see the Irish government disgruntled was in keeping with his own approach to politics but, as one might expect, he placed relatively little store on relations with Ireland and the St Patrick’s Day meeting. In this he differed from his precedessor but also his successor, both of whom seem to have had different reasons to dwell on it. When Fay met President Richard Nixon in the White House on St Patrick’s Day 1969, he reported that the ceremony was more cordial then on previous occasions. He acknowledged, however, that this may have been an attempt by Nixon to court Irish-American voters with an eye to facing Senator Edward Kennedy (the brother of the assassinated John F, Kennedy) as the likely Democratic nominee in the 1972 presidential race. Events took a different turn, but while the political importance of the St Patrick’s Day meeting in the White House remained consistent from an Irish perspective, its relevance to the US shifted according to the inclinations, or the requirements, of the occupant of the office in which it took place.

Material reproduced by permission of the Director of the National Archives of Ireland. Documents on Irish Foreign Policy Volume XII, 1961-1965, is available now from the Royal Irish Academy.