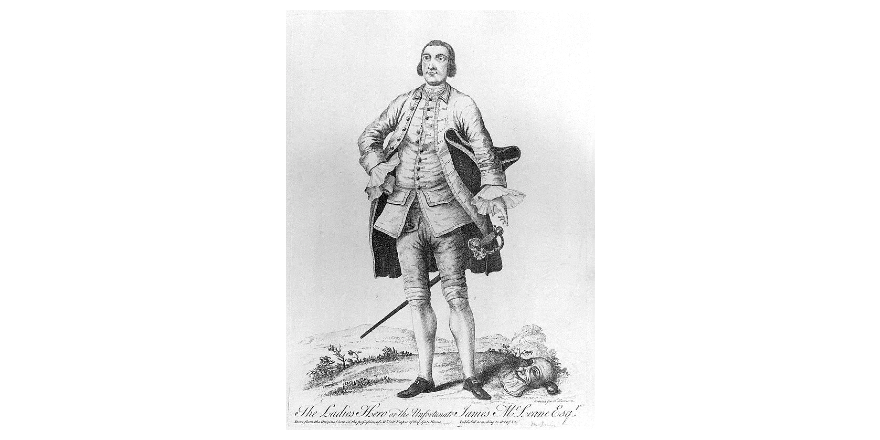 The DIB has curated a selection of its most notorious rogues – pirates, blackmailers, thieves and murderers – for your delectation. Working with William Plunkett, Maclaine established the myth of the dashing gentleman highwayman. His trial was well attended by ladies enamoured of his romantic image.

Maclaine, James (1724–50), gentleman highwayman, was born in Co. Monaghan, second son among two sons and one daughter of the Rev. Lauchlin Maclaine, presbyterian minister, from Scotland, and Elizabeth Maclaine (née Milling). His brother, Archibald Maclaine, later became a minister. Educated locally, James was reckless, headstrong, and dismissive of his parents' attempts to make him respectable. When his father died he squandered his inheritance on a dissolute lifestyle and was forced to find work in London. He considered joining the French army, but instead enlisted in Lord Albemarle's horse troops. Again his propensity for fast living cost him dearly, and he suffered a thrashing after he was discovered having an affair with an officer's wife. Around 1746 he married the daughter of a publican on Oxford Road, London, and with her dowry established himself as a grocer and chandler in Welbeck St., Cavendish Square. His wife died in 1748, leaving one daughter; and, frustrated by his lack of opportunities, he decided to embark on a life of crime. Together with William Plunkett, an Irish apothecary who had attended to his wife, he decided to find a rich heiress to marry. Pretending to be a high-living gentleman, with Plunkett as his liveried servant, he exhausted all his money dancing and gambling but had little success in his quest. Undaunted, he now turned his hand to robbery and became a highwayman. This proved extremely profitable and he took lodgings at St James's St., where he passed himself off as an Irish squire, with Plunkett again in attendance.

A dashing, handsome man, Maclaine soon became a popular figure in London. His most infamous adventure occurred in November 1749 when he robbed the famous diarist and politician Horace Walpole at Hyde Park. For the first and only time in his career, Maclaine fired a shot, as one of his pistols went off accidentally, scorching Walpole's face. Maclaine later insisted that he would have committed suicide if he had killed his victim; Walpole's retort was that he would be satisfied if Maclaine just allowed himself to be hanged. Overcome with guilt, Maclaine afterwards sent two letters to Walpole apologising for the injury and suggesting a duel if he wanted satisfaction; Walpole wisely ignored the correspondence. After visiting his brother at the Hague, where he impressed with his extravagant gifts and lifestyle, Maclaine again decided to seek an heiress. Together with Plunkett, who was visiting Ireland, he set his sights on a woman with an income of £40,000, but the scheme came to nothing. Returning to his career as a highwayman, he committed a number of daring robberies in the summer of 1750. A raid on the Salisbury coach on 26 June 1750 proved to be his undoing. One passenger made public a list of his stolen possessions, and when Maclaine sold some of the items on 19 July the crime was traced to him. On 27 July he was arrested and immediately broke down in prison, confessing everything. Weeping in his cell, he consistently blamed Plunkett (who evaded capture) for leading him astray. His trial (13 September) attracted enormous interest, especially from women who were enamoured of his romantic image. The jury found him guilty without leaving the box. Sentenced to death, he attempted to read a plea for mercy but lost his nerve and was only able to speak a few words. After a few minutes of embarrassed silence he cried: ‘My lord, I can go no further’. His brother denounced him, and from his cell Maclaine wrote a number of letters expressing regret for his actions. He was executed at Tyburn on 3 October 1750, having informed a minister that he went to his execution ‘without being daunted but rather with eagerness’ (Allen, 35). After his death an enduring legend developed around the story of ‘the gentleman highwayman’ and ‘the ladies' hero’. The film Plunkett and Macleane (1999) was an innovative retelling of his story, with Robert Carlyle as Plunkett and Johnny Lee Miller as the dashing highwayman.