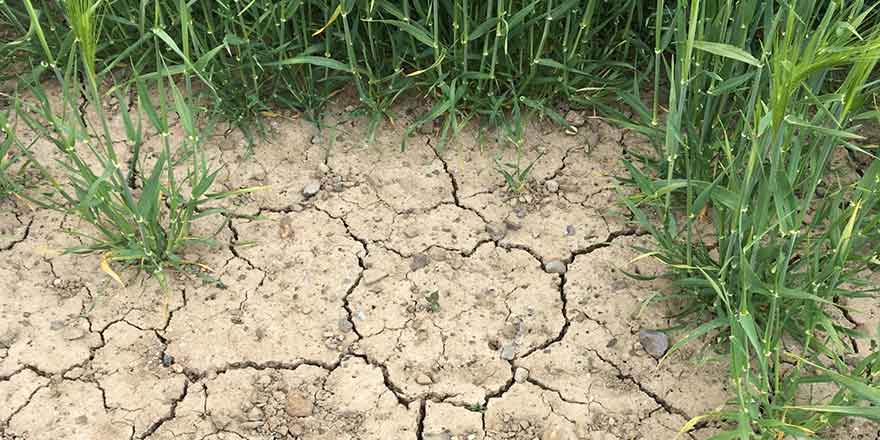 Drought: a risk being overlooked in Ireland?

The year 2018 revealed the vulnerabilities of Irish society to drought across multiple sectors, particularly water supply, agriculture and ecology. Now, in the midst of the Covid-19 pandemic, another drought is brewing.

Drought is a deficit of water relative to normal conditions. However, such simplicity is deceptive. Droughts are complex, slow-onset hazards that affect multiple natural, social and economic sectors in different ways, and at different time and spatial scales. Unlike floods, which tend to be more confined spatially, droughts can affect large regions, sometimes entire countries and continents simultaneously.

Under natural conditions, reductions in precipitation can drive soil moisture deficits and in time lower runoff, streamflow, groundwater, reservoir and lake levels. How a drought evolves depends on the magnitude, timing and duration of the precipitation anomaly (or deviation from normal), the type of soil and land cover, dominant runoff pathways, geology and other variables. Recovery from drought is also determined by these parameters. Moreover, the impacts of drought are conditioned by the vulnerability of the receiving natural (e.g. habitat), social (e.g. people, cities) and economic systems and how human activities have modified the hydrological cycle (Van Loon et al., 2016).

This complexity has prompted scientists to categorise different types of drought, including; meteorological, agricultural, hydrological, socioeconomic and ecological droughts (e.g. Wilhite and Glantz, 1985).

Meteorological drought typically refers to the degree of dryness relative to normal and is characterized by the intensity, timing and duration of the dry period, often on daily, monthly, seasonal, or annual time scales.

Agricultural drought links meteorological conditions to agricultural impacts and is a delicate interplay between soil moisture deficits, plant water demand and the stage of crop growth.

Socioeconomic drought occurs when demand for a product or service exceeds supply as a result of a meteorological, agricultural or hydrological drought.

Given these complexities, it is impossible to offer a single, all-encompassing definition of drought. It is therefore crucial that we measure and track droughts in integrative ways that are meaningful for all stakeholders – from water managers to farmers, beer brewers to anglers and local communities. To do so requires spatially representative, long-term, quality assured meteorological and hydrological observations, remotely sensed and satellite data, weather forecasts ranging from traditional timeframes to longer-term seasonal outlooks, together with understanding of vulnerabilities in natural and socio-economic systems (e.g sectors, businesses, production chains) to link scientific metrics to real world impacts.

In Ireland, a drought is defined as a period of 15 or more consecutive days, for which no one day records 0.2 mm or more of precipitation. While such strict definitions may have value meteorologically, they are limited in assessing and characterising the myriad aspects of drought in complex reality. Indeed, such limited metrics may actually work to downplay drought risk in multiple and vulnerable sectors.
Better, but by no means perfect, drought metrics exist. These allow the anomalous nature of droughts across multiple variables to be characterised based on local climate, periods of interest and the magnitude, timing and duration of precipitation deficits. By accumulating precipitation deficits over time meteorological droughts can be linked to agricultural, hydrological, socio-economic and ecological droughts and impacts. For instance, deficits accumulated over 1 to 3 months are closely associated with agricultural droughts and the formation of soil moisture deficits. Deficits accumulated over longer durations, such as 6 to 12 months, can be associated with hydrological drought.

The changing experience of drought in Ireland

Until recently drought has been somewhat of a forgotten hazard in Ireland. For instance, few hydrological droughts with all island-wide impact have occurred since the mid-1970s. Agricultural droughts have been more common, but spatially variable and not always problematic. The forgotten risk of drought is also reflected in policy. We are awaiting Ireland’s first National Drought Plan and have no integrated, publicly available, national scale drought monitor or warning system. The recent establishment of Climate Action Regional Offices (CAROs) to lead climate change adaptation among local authorities gave specific regions the lead on distinct climate hazards. Drought did not feature.

However, recent experience and research are beginning to change the perception of drought in Ireland. Noone et al. (2017) developed a historical drought catalogue for the island of Ireland, showing that we have had intimate past experiences of drought with diverse impacts. Murphy et al. (2020) report on a major drought from 1765-1768 that impacted across the British and Irish Isles, dwarfing many subsequent droughts in the record. Forthcoming research from the JPI funded project CrossDro on multi-century tends in drought across Europe shows that Ireland has amongst the strongest trends to greater precipitation deficits in summer.

The year 2018 revealed the vulnerabilities of Irish society to drought across multiple sectors, particularly water supply, agriculture and ecology. In the context of multi-centennial historical records, the 2018 drought was not very remarkable. However, this should alert us to how vulnerability to drought has grown in Ireland over recent decades. It should prompt us to ask how we could have been better prepared.

At the time of writing, in the midst of the Covid-19 pandemic, another drought is brewing. Following a wet winter, an exceptionally dry spring has resulted in precipitation deficits comparable to (and in places exceeding) 2018 in the east and southeast, but this time even earlier in the year. Soil moisture deficits are considerable. Seasonal forecasts from multiple international modelling centres point to a hotter and drier than normal outlook for the coming summer months. If realised, they raise the prospect of more serious impacts ahead. The importance of water as a first line of defence for public health in a pandemic adds a new vulnerability, while the post lockdown re-opening of the economy in the coming weeks is likely to increase water demand even further. The situation will need careful monitoring.

Over the coming decades our experience of drought is likely to become more frequent. Human driven climate change will be super-imposed on natural variability. Climate models tend to project reductions in summer precipitation for Ireland, though the magnitude of decreases is uncertain. Warming temperatures will also likely increase evapotranspiration, potentially increasing drought severity and the more rapid generation of soil moisture deficits. The persistence of blocking anti-cyclones – the atmospheric conditions often linked to droughts - are anticipated to increase. Winters are expected to become wetter, but also more variable, with potential impacts on drought timing and duration.

So how do we build resilience to drought? There is much to do and much ongoing. To assist planning and preparedness Ireland needs to establish a publicly accessible drought monitor and hydrological outlook for Ireland. Such tools are widely deployed for the public good in other countries (see UK examples of a drought monitor and hydrological outlook). A dairy farmer or water manager can access this information and make informed decisions. The success of such platforms are predicated on being relatable to stakeholder needs, representative of different drought types and based on real-time, spatially representative data. We have much of the hydro-climatic data necessary to realise such a vision. That data needs to be made publicly available in near real-time. Ongoing research at the Irish Climate Analysis and Research UnitS (ICARUS) at Maynooth University, funded by Science Foundation Ireland, is benchmarking approaches to seasonal hydrological forecasting nationally. Seasonal and extended range forecasts are continually improving. Insights from this work could inform the development of hydrological outlooks in Ireland.

Water resource systems in Ireland are often old, brittle and have limited headroom due to historic under-investment in infrastructure. Irish Water is in the process of upgrading water supply systems and developing new sources. New (and existing) infrastructure should be stress tested against the most extreme historical droughts, rather than single season droughts which are extreme in the context of recent decades, but unremarkable in the context or our understanding of historical events. How would the water supply of our major cities perform if the drought of 1765 were to replay? How would ecology and aquatic environments fare? Our river catchments are sensitive to drought in different ways – flashier, fast onset droughts where there is little groundwater storage, and longer droughts where there is large groundwater storage. It is not a simple east/west divide.

Resilience to drought will not be built by climate science and modelling alone. Social science insights are essential and drought needs to have greater visibility in national policy. While reductions in public water consumption were critical to avoiding more serious impacts in 2018, we are not, on the whole, conscientious in our use of water. In the post-Covid world our relationship with water will need to be re-imagined to view water as an important public health issue.

Building resilience will also mean co-producing science with stakeholders and understanding the nature of vulnerability at individual and community levels - teasing out the experiences and the coping mechanisms of those affected. As part of an IRC Coalesce project Dr. Arlene Crampsie is using oral history as a way to refresh memories of past droughts and gain insights into these issues. This is crucial work. Drought resilience will also mean having joined up policy. How, for example, do national strategies on afforestation and food production influence drought risk and vice versa?

Given these vulnerabilities, gaps, and open questions, much important work remains to be done on drought. It is beyond time we remembered this forgotten hazard.

Current Opinion Series (number 4) of the RIA Climate Change and Environmental Science Committee
(Blog post content and statements are proprietary to the authors. Each author represents only themself and their own opinion.)
References

When did you join the RIA Climate Change and Environmental Science Committee?
September 2019

What is your area of research expertise and where are you based?
I am most interested in hydro-climatology – the interface of hydrology and climatology and am based at the Irish Climate Analysis and Research UnitS (ICARUS) at Maynooth University.

What is the single most pressing environmental issue facing Ireland?
I would say climate change, but I think this is where need to see things differently and try to view the many environmental challenges we face in a more integrated way. Addressing challenges in isolation, as science tends to do, can lead to blind spots and an inability to see cascading risks. I guess that is the geographer in me talking.

In your opinion what are some of the most compelling solutions to this issue?
Solutions is a big word. I think we are beyond ‘solving’ some of the environmental challenges we face. For example, we are committed to climate change even if we stop all greenhouse gas emissions now. The emphasis has to be on limiting the most extreme changes and developing resilience and the capacity to adapt to the changes that are happening. If Covid-19 teaches us anything, it is that we need to be ready for uncertainty and surprise.

What advice do you have for individuals to tackle this environmental crisis?
Transformation begins with the individual. It takes commitment and persistence, so if at first you don’t succeed, try and try again.