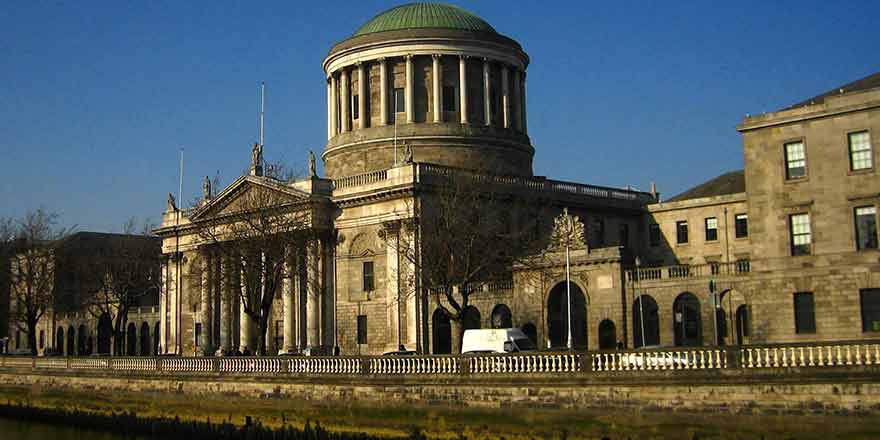 Climate Governance and Fundamental Rights before the Supreme Court

On 22 and 23 June 2020 the Supreme Court will hear the appeal in Climate Case Ireland, a challenge to the State’s National Mitigation Plan.[1]  This case raises important issues of constitutional law, human rights law and climate governance.  Its significance is reflected in the fact that the appeal will be heard by a panel of seven judges of the Supreme Court.

Issues relating to climate change have increasingly come before the courts around the world, most notably in the Urgenda case where the Supreme Court of the Netherlands upheld an order directing the Dutch State to reduce greenhouse gas emissions by at least 25% in 2020 compared to 1990 levels.[2]

Background to the appeal

In 2017 Friends of the Irish Environment (FIE) – an NGO – brought judicial review proceedings in the High Court with the aim of securing more ambitious and more urgent Government action on climate change.  It maintained that the approval by the Government of the National Mitigation Plan[3] (the Plan) in July 2017 was unconstitutional and in breach of human rights obligations and that it also failed to comply with the requirements of the Climate Action and Low Carbon Development Act 2015 (the 2015 Act).

Simply put, FIE alleged that the measures included in the Plan fail to ensure the necessary reduction in greenhouse gas emissions to enable Ireland to meet its climate obligations.  It is contended that the Plan is an inadequate response and particularly so as regards the urgent need for emissions reduction in the short term.

The High Court recognised the scientific consensus on the threat posed by the effects of climate change.  It also accepted that the need for action is ‘undoubted’.  However, FIE’s challenge to the legality of the Plan was unsuccessful.

In its judgment delivered on 19 September 2019,[4] the High Court found that the Government enjoys ‘a considerable margin of discretion’ as to how it should achieve the transition to a low carbon, climate resilient and environmentally sustainable economy by the end of the year 2050 (the ‘national transition objective’ set down in the 2015 Act).  It was not part of the court’s function to ‘second-guess’ the opinion of Government on such issues.

The High Court determined that, even if the Plan is justiciable, the 2015 Act concerns ‘matters which have a significant policy content’ and the obligations that it creates are articulated in terms which confer ‘considerable latitude’ on Government.  It followed, therefore, that the Government ‘enjoys a considerable discretion’ in its preparation and approval of the Plan.

The Plan is to be interpreted as being ‘a living document’.  The various measures it prescribes are ‘not set in stone’ nor intended to be the State’s ‘once and for all response’ to the urgent need for climate action.   The Plan ‘is but one, albeit extremely important, piece of the jigsaw’.  Furthermore, on the High Court’s interpretation of the 2015 Act, it did not prescribe or impose on the Government a statutory obligation to achieve particular intermediate targets.

Mr Justice MacGrath concluded that FIE had not established that the Plan itself, or the decision to approve it, breached the provisions of the 2015 Act.  The High Court also ruled against the NGO on the alleged breach of constitutional rights.  FIE had alleged breach of the right to life, the right to bodily integrity and the right to an environment consistent with human dignity.  The court was not convinced that the making or the approval of the Plan had the effect of breaching constitutional rights.  It also rejected FIE’s arguments concerning alleged breach of rights guaranteed by the European Convention on Human Rights (the ECHR).

On 13 February 2020 the Supreme Court granted FIE permission to bring a direct appeal from the High Court’s decision.[5]

In granting permission to appeal, the Supreme Court noted that the parties accept that there is ‘a degree of urgency in respect of the adoption of remedial environmental measures’.  Neither is there any dispute as to the science underpinning the Plan and the likely increase in greenhouse gas emissions over its lifetime.  The parties also accept the gravity of the likely effects of climate change.

What is at issue in this appeal?

Essentially, the Supreme Court will consider whether the Government acted unlawfully and in breach of fundamental rights when it adopted the Plan in July 2017.

The appeal raises a number of important issues of constitutional law, human rights law and climate governance including:

Is the Plan subject to review by the courts?

This concerns the doctrine of the separation of powers under the Constitution which dictates that the courts should avoid interfering with the exercise of discretion by the Legislature or, as in this case, the Executive, when it is implementing Government policy.  A key issue here is the extent to which the State must have regard to fundamental rights in making and adopting the Plan.

If the making and adoption of the Plan is indeed justiciable as matter of law, what standard of review should the court apply?

This issue includes consideration of the role of the doctrine of proportionality where it is alleged that fundamental rights have been infringed, and particularly where environmental protection is at stake.

Whether FIE, as a company, has standing to invoke the fundamental rights alleged to have been breached?

The standing point is an important preliminary issue for the Supreme Court to consider in the appeal.  The High Court accepted that FIE had standing in the particular circumstances of the case.  Mr Justice MacGrath took the view that FIE sought to litigate ‘important issues, including those of a constitutional nature, affecting its members and indeed the public at large.’  The High Court also took account of the fact that FIE raised ‘significant issues in relation to environmental concerns’.

Among the constitutional rights asserted by FIE is the ‘unenumerated’ – or ‘unspecified’ – constitutional right to an environment consistent with human dignity.  The High Court was prepared to accept, for the purposes of the particular case before it, that there is indeed such a right.  The appeal provides the Supreme Court with its first opportunity to consider the status and scope of this particular right.

It is notable that the right to an environment consistent with human dignity was first recognised by the High Court in November 2017, in another case brought by FIE concerning a challenge to the extension of the planning permission for a proposed new runway at Dublin Airport.[6]

FIE asserts that the inadequacy of the Plan, in terms of failing to deliver the necessary emissions reduction, infringes the right to life (Article 2, ECHR) and the right to respect for private and family life and home (Article 8, ECHR).  One of the issues in contention here is the interpretation of the ECHR by domestic courts.

Since the decision of the High Court there have been significant developments on the political side, including the (non-statutory) Climate Action Plan 2019[7] and the various commitments to increased climate action made in the proposed Programme for Government.  However, the issues in the appeal remain of great importance and resonate far beyond the specific context of Climate Case Ireland.

Given the significance of the complex legal issues that arise in this appeal, there is an enormous level of interest in the case, not only in Ireland but around the world.

Climate litigation is now a well-established feature of the legal landscape globally.  The appropriate role of the courts, where it is alleged that Governments have failed to do enough – or quickly enough – to reduce emissions, engages difficult questions concerning the separation of powers.  A key issue in the appeal is the extent to which the courts are entitled to judicially review Government measures, such as the Plan, where they are alleged to interfere unlawfully with fundamental rights.

The potential of environmental constitutionalism as a means of advancing implementation and enforcement of environmental human rights continues to gather pace internationally.  The appeal in Climate Case Ireland provides the Supreme Court with the opportunity to bring certainty to a range of key legal issues concerning the State’s response to the threat posed by climate change, including the impact of climate change on fundamental rights.

Whatever is the ultimate outcome in the Climate Case Ireland appeal, there is no doubt that the courts will continue to be called on to adjudicate in litigation aimed at securing more ambitious and more urgent climate action.

By Dr Áine Ryall, Co-Director, Centre for Law and the Environment, School of Law, University College Cork
Current Opinion Series (number 5) of the RIA Climate Change and Environmental Science Committee
(Blog post content and statements are proprietary to the authors. Each author represents only themself and their own opinion.)

[1] Friends of the Irish Environment CLG v Government of Ireland, Ireland and the Attorney General, Supreme Court, Appeal No: 205/19.

[2] The State of the Netherlands (Ministry of Economic Affairs and Climate Policy) v Stichting Urgenda ECLI:NL:HR:2019:2007.

[4] Friends of the Irish Environment CLG v Government of Ireland, Ireland and the Attorney General [2019] IEHC 747.

[5] Friends of the Irish Environment CLG v Government of Ireland, Ireland and the Attorney General [2020] IESCDET 1

When did you join the RIA Climate Change and Environmental Science Committee?
This is my second term with the Committee; I first joined in 2014 and was delighted to be reappointed in 2018.

What is your area of research expertise and where are you based?
I am based at the School of Law, UCC where I am Co-Director of the Centre for Law and the Environment.  My research explores the legal response to the climate challenge, including the impact of climate litigation.  I have a particular interest in climate governance. I was a member of the Expert Advisory Group to the Citizens’ Assembly for the climate change module of its work. I am Vice-Chair of the UN ECE Aarhus Convention Compliance Committee, a quasi-judicial body which oversees implementation of environmental human rights across 47 States.  My research draws on my experience with the Compliance Committee and examines, in particular, the development of standards within environmental human rights; implementation of environmental human rights in practice; access to justice in environmental matters; and environmental law enforcement more generally.

What do you think is the single most pressing environmental issue facing Ireland?
Climate breakdown and biodiversity loss – both issues are interlinked.

In your opinion what are some of the most compelling solutions to this issue?
A human-rights based approach holds the potential to deliver the transformative change needed urgently to tackle environmental damage, climate change and biodiversity loss.  Litigation such as Climate Case Ireland servesto highlight the impact of climate change on human rights.  This is something that has not yet received the attention it deserves in Ireland.  Where Governments fail to vindicate human rights, including in the context of environmental protection and climate change, the courts must act to ensure the rule of law. Of course the fact that environmental rights may be recognised formally within a particular legal system does not guarantee that those rights will always be vindicated fully in practice.  Everything turns on the availability of affordable access to justice to ensure that rights are respected and, where they are not, that there is an effective enforcement mechanism in place.