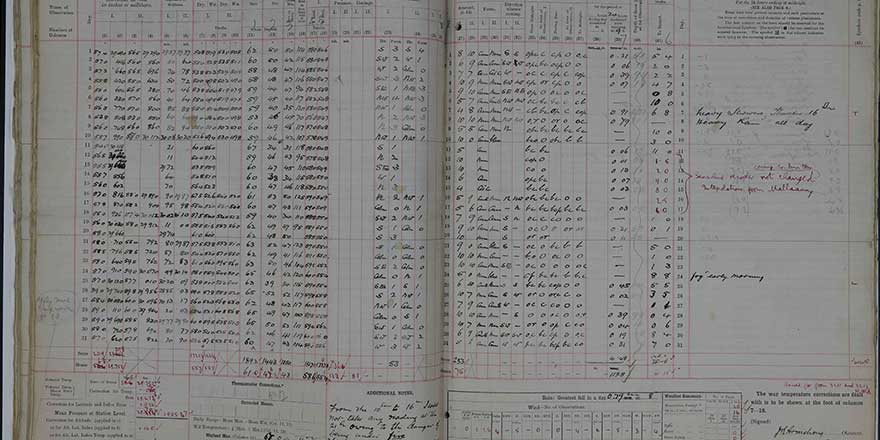 Old data to the rescue: recovering weather observations to shed light on our past and present climate

There are many paper records from the nineteenth century containing handwritten weather observations from various sites around Ireland. Finding these records and rescuing the data from them is not an easy task but could prove more useful than you might expect.

Is it a seven or a nine? It’s not obvious at first glance, but by carefully scrutinising a few of the pages it’s possible to identify the handwriting style of numerals. It seems to be a nine, although the ink has faded slightly and the observer appears to have corrected his first entry. At least it agrees with the seven-day average temperature the observer was required to estimate at the end of the period so we can be confident we are reading the figures correctly.

With a few clicks on the keyboard the data are ‘lifted’ from the frayed pages of the journal (actually, a PDF copy) into a digital format accessible by all. Henry Carlton, the man recording the data at Kilkenny Castle in 1884, would have been amazed that in 2020 someone would be carefully examining his not quite copperplate writing to extract what was then grandly titled “Agricultural Statistics of the Weather”, although in reality it contained rather limited information: daily rainfall, the maximum and minimum temperature, and a one line description of the weather.

Today, you may also be surprised to learn that there are many such paper records from the nineteenth century containing handwritten weather observations from various sites around Ireland.  Those with a professional interest may be further surprised that some of these records are still ‘non-digitized’ and therefore largely inaccessible for number-crunching analysis.

But why bother with these old records in the first place since the data quality, compared to modern observations, is often questionable? It’s inspired by the recognition that our climate is not fixed either today or in the past before the Industrial Revolution introduced us to greenhouse gas emissions.

‘Worst in living memory’ is a phrase we often hear when some extreme weather event occurs, suggesting that such a time-frame, although ill-defined, is a suitable yardstick for measuring the climate. Indeed the World Meteorological Organisation loosely follows this approach by recommending rolling 30-year periods (the current one is 1981-2010) for gathering statistics.

Unfortunately, such periods are very short if we want to put an extreme weather event in context. We really need a long record so that we can appreciate just what the ‘normal’ climate can throw at us before we factor in the influence of greenhouse gases on our current and future climate. It’s particularly important for rainfall as this can be highly variable from year to year; a few years of data may give a false sense of the risks of severe flooding or drought, for example.

Does it really need to be done manually? Surely, with today’s advanced AI and pattern recognition software it could be automated and delivered more speedily? Sadly, the software is not quite up to the task and for some ‘messy’ data sheets it falls well short of what a human can achieve in terms of content and, more importantly, accuracy.

Data are usually entered into modern spreadsheets, which often presents its own problems. For example, a popular software package does not excel in handling dates pre-1900; if you want to check automatically that dates align with tabulated days of the week (the previous year’s calendar sheets were occasionally used for the next year by Mr Carlton, increasing the risk of date errors) you need to be inventive.

A vital issue is the reliability of the records. What size was the rain gauge? Did the site have good exposure or was it compromised by nearby growing trees and vegetation over the years? Was the thermometer calibrated? How was the temperature measured? This type of information - “metadata” - is vital if the records are to be acceptable for climate work.

Rescuing old Irish weather observations is actively pursued by Met Éireann, with recent work enabling Irish temperature data to be extended back to 1831 (Mateus et al., 2019). The source material mostly comes from well documented archives but it’s possible that there are privately held datasets that could also be used; if you are aware of any of these Met Éireann would be delighted to hear from you.

Sometimes, the source material is not primarily meteorological. An excellent example of this, and which also emphasises the importance of metadata, is highlighted in a study (Labbé et al., 2019) of grape harvest dates 1354-2018, from Beaune, France; the authors correlated the data with a subset of air temperatures to draw conclusions about the past and present climate over the 664-year period.

Data rescue can be a tedious task, but occasionally, there are comments in the archives that enliven an otherwise dry document. For example, during the Irish Civil War in 1922 the observer decided it would be prudent for a short period to adjust his schedule (see the commentary in the image below).

Looking back at Henry Carlton’s handwritten notes and figures, and the general untidiness of some of his work, you wonder what kind of a person he was. Sometimes his signature appeared to be written in a hurry. Perhaps he was under pressure every Tuesday: the printed text at the bottom of seven-day summary sheet solemnly instructed:

This paper should be enclosed in an envelope and posted AS SOON AS POSSIBLE after the Tuesday morning reading, in order that it may reach London by the FIRST POST on Wednesday.

No computers in those days but Express Post was available! 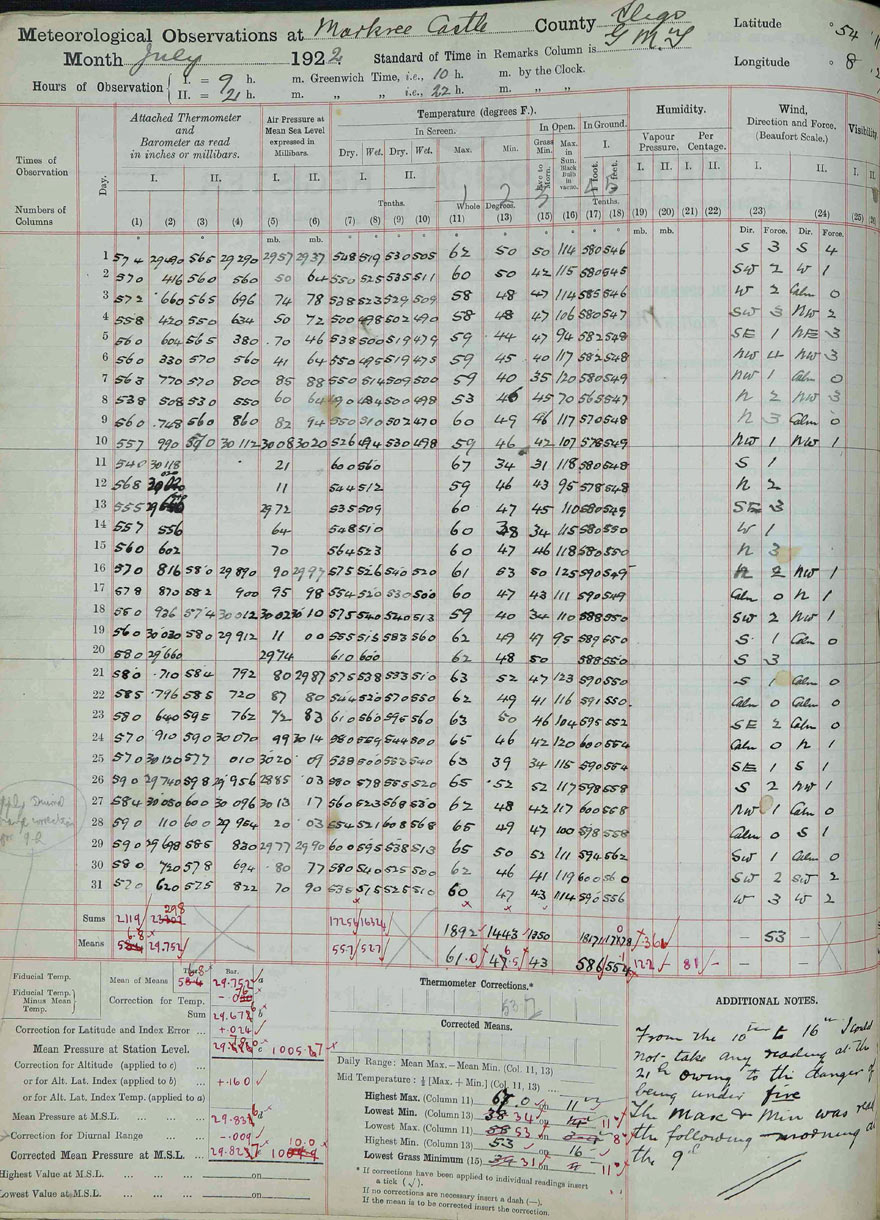 The busy handwritten entries highlight the difficulties encountered in digitizing such records. Here, the “Additional Notes” section in the bottom right corner of the page allowed the observer to comment on the disruption of the work arising from the Irish Civil War. Image provided by Mary Curley, Met Éireann

Labbé, Thomas, Christian Pfister, Stefan Brönnimann, Daniel Rousseau, Jörg Franke, and Benjamin Bois. 2019. “The Longest Homogeneous Series of Grape Harvest Dates, Beaune 1354–2018, and its Significance for the Understanding of Past and Present Climate Discussions.” Clim. Past, 15, 1485-1501.

When did you join the RIA Climate Change and Environmental Science Committee?
I became involved when I was working in Met Éireann and leading a regional climate modelling project.

What is your area of research expertise and where are you based?
My background is in weather and climate research in Met Éireann. I am now based in UCD.

What do you think is the single most pressing environmental issue facing Ireland?
The erosion of biodiversity.  There is a linkage with climate change but it is not the only driver: besides our carbon footprint there are other damaging ‘footprints’ our lifestyles are leaving on the environmental landscape.

In your opinion what are some of the most compelling solutions to this issue?
Government policy supported by effective legislation.

What advice do you have for individuals to tackle this environmental issue?
‘Reduce, reuse and recycle’  -  the 3Rs are still highly relevant.

Article image: Weather data recorded at Markree Castle, Co. Sligo, for July 1922. The busy handwritten entries highlight the difficulties encountered in digitizing such records. Here, the “Additional Notes” section in the bottom right corner of the page allowed the observer to comment on the disruption of the work arising from the Irish Civil War. Image provided by Mary Curley, Met Éireann.