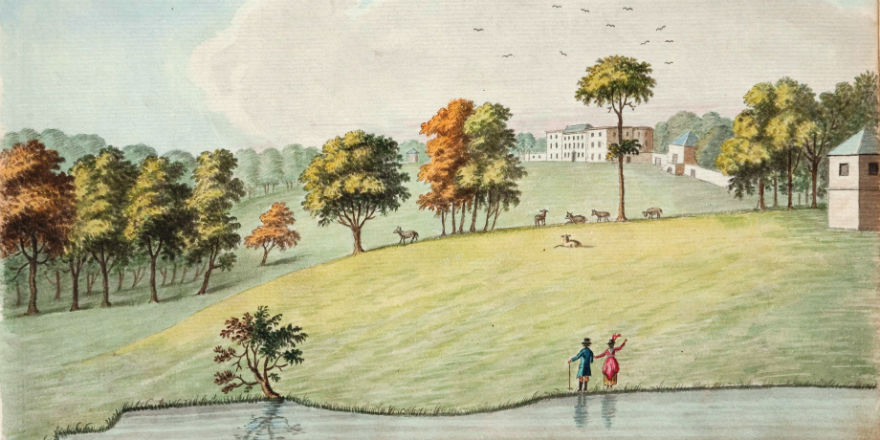 Marking the bicentenary of the death of Gabriel Beranger on 18 February, 1817, this exhibition features a selection of original watercolours from our collection.

Gabriel Beranger was a Dutch artist who came to Ireland in 1750, remaining there until his death. He ran a print shop and artist’s warehouse in Dublin and spent much of his time sketching the antiquities of Ireland. From 1779-83 he was one of the main artists employed by the Hibernian Antiquarian Society, a predecessor of the Royal Irish Academy, to draw the ancient monuments of Ireland. He embarked on an extensive sketching tour of Connacht in 1779 with the Italian architect Bigari, which became the most important archaeological survey of Ireland until the Ordnance Survey began in 1824.

The Academy has one of Ireland’s finest collections of antiquarian drawings and the Beranger collection is its largest collection of 18th century watercolours. Many of the drawings are either copies by Beranger of his own originals or of originals by other artists such as General Charles Vallancey or the Earl of Portarlington. This exhibition showcases a selection of drawings of buildings and antiquities, many of which have since either fallen into ruin or entirely disappeared, such as St John’s Tower in Dublin or Ballybrittas Castle, Co Laois. Many of Beranger’s drawings are the only extant records of these monuments of Irish heritage.

Read 'Beranger's painted people - himself and others' by Dr Peter Harbison.