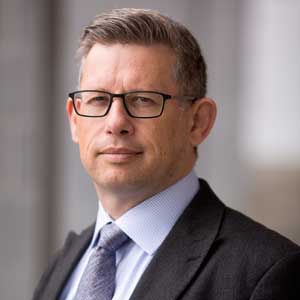 Colum Dunne BSc (Hons), PhD, MBA, LLM began his third level education at University College Cork (UCC). He is Fellow of the Royal College of Pathologists (London) (FRCPath), Royal Academy of Medicine in Ireland, Royal Society of Medicine (London).
Colum held senior research roles at Ireland's National Food Biotechnology Centre, UCC's BioMerit Research Centre & the Departments of Microbiology and Medicine in UCC.
Following a period as General Manager of a cancer research centre (supported largely through philanthropy) developing gene-/chemotherapies and innovative medical devices, Colum joined multinational Glanbia Plc as Director of Research, and served for five years as a Director and member of the Boards of the Glanbia Nutritionals group of companies. He is an inventor on multiple patents and was CEO and Founding Director of SoloPep Ltd, which commercialised an infection risk-reduction medical device for patients with respiratory illness.
Colum has published extensively (>240 peer-reviewed articles). His research aims to better understand intestinal diseases such as Crohn’s disease and ulcerative colitis, microbial colonisation and infection, host response, healthcare associated infections, prevention and ways to mitigate effects. Further research focuses on medico-legal  aspects of vulnerable populations.
Colum is currently the longest serving member of the the UL School of Medicine Executive Team. He is Foundation Professor and Director of Research at the School of Medicine, and Founding Director of the Centre for Interventions in Infection, Inflammation, and Immunity (4i) at the University of Limerick, Ireland. Colum served for two terms on the University’s Governing Authority (University Board).