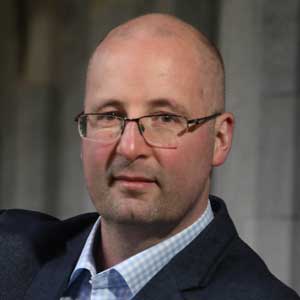 John Murray is lecturer in palaeontology at NUI Galway (Earth & Ocean Sciences, School of Natural Sciences). He holds a BA and PhD in geology from Trinity College Dublin and taught there for two years before taking up his present lecturing position in NUI Galway in 2003. He has wide-ranging research interests in all aspects of palaeontology, palaeoclimatology and carbonate sedimentology, with particular reference to the Carboniferous. He is also interested in Pleistocene to Holocene palaeoenvironmental change and human evolution, and also the history of geoscience research. Since 2011, he has run the ‘History of Life’ project [https://www.youtube.com/watch?v=iK-X6OSF-bo&t=14s], a multi-award winning geoscience education initiative, which enables undergraduate science students to create short documentary films exploring the evolution of life on Earth. These films are released to the general public on YouTube and have reached a wide and diverse international audience. John is also currently an editor of the Irish Journal of Earth Sciences, which is produced by the Royal Irish Academy.