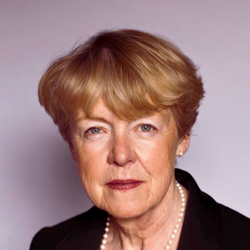 Chair of the Governing Authority MU

Dr Mary Canning was elected President of the Royal Irish Academy in March 2020 and was appointed Chair of the Governing Authority of Maynooth University in December 2019.  She holds a PhD in Literature from University College, Dublin.  As a former World Bank Lead Education Specialist based in Washington DC, she worked on education policy in a wide range of countries in Europe and Central Asia from 1992-2007.  She has served on numerous OECD Higher Education Examiner teams in Europe and Latin America.  Dr Canning was a board member of the Higher Education Authority from 2007 to 2017 and, in 2009, she was appointed to the National Strategic Review of Higher Education in Ireland.  In 2014 was awarded a D.Litt (honoris causa) by the NUI.