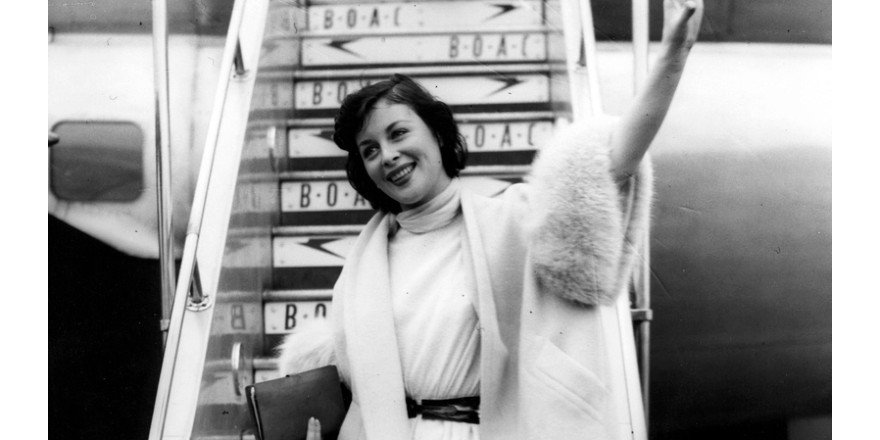 Alcohol in the DIB: Constance Smith

Smith, Constance Mary (1928–2003), actress, was born in January or February 1928 in Limerick. Her father, a Dublin native who had served in the British army during the first world war, was working on construction of the Ardnacrusha power station; her mother Mary was from Limerick. On completion of the station in 1929 the family moved to Dublin; her father died soon thereafter. One of seven or eight children, Constance was reared in extreme poverty in a one‐room flat in Mount Pleasant Buildings, Ranelagh, and was educated at St Louis convent primary school, Rathmines. She worked in a local chip shop, an O’Connell Street ice‐cream parlour, and as a domestic servant. A blue‐eyed brunette, strikingly beautiful from a young age, in January 1946 she won a special prize in the Dublin film star doubles contest (as Hedy Lamarr), on foot of which she was screen-tested by the Rank Organisation, and signed to a seven‐year contract. Moving to London, she was groomed in etiquette, poise, and acting technique in the Rank acting school (the so‐called ‘charm school’). She first appeared on screen in an uncredited, but eye‐catching role, as a cabaret singer in the underworld classic Brighton rock (1947); she was engaged for a time to the film’s director, John Boulting. Though never cast in a Rank film, she appeared in several independent productions, including Room to let (1950), as the daughter of a landlady whose mysterious new tenant turns out to be Jack the Ripper. About 1950 she was sacked by Rank, supposedly for objecting to criticism of her Irish accent; she also resisted the studio’s efforts to change her name.

Her vivacious performance as an Irish maid in The mudlark (1950) attracted the attention of Darryl Zanuck, head of production at Twentieth Century Fox, who signed her to a seven‐year contract, and vigorously promoted her as his Emerald Isle discovery. En route to Hollywood, she worked on location in Canada in Otto Preminger’s impressive film noir The 13th letter (1951), as the wife of a hospital doctor (played by Charles Boyer) in a small Québec village, who is suspected, on the basis of poison‐pen letters, of an adulterous involvement with a newly arrived English doctor (played by Michael Rennie). Cast in a coveted role opposite Tyrone Power in The house in the square (1951), she returned to London for filming, but was soon embroiled in studio politics, and uncomfortable in a part too demanding for her experience and skills. After six weeks on set she was abruptly dropped, her role was recast, and her scenes re‐shot.

Despite this setback, for the next few years she was cast by Fox in starring roles opposite some of the studio’s leading male actors. Nonetheless, her own star status seems to have been generated more by intensive studio publicity than by the quality or success of her movies. She appeared on the cover of Picturegoer, the leading British film magazine of the period (March 1951), and was a presenter at the 1952 Academy awards ceremony. Her image was that of a spirited, innately rebellious individualist, unafraid to defy studio manipulation – qualities attributed by the entertainment press to her Irish ethnicity. One industry colleague remembered her as ‘the intelligent man’s Elizabeth Taylor’ (Barton, 117). Her credits included Red skies of Montana (1952), as the wife of the chief of a crew of forest‐fire‐fighters, played by Richard Widmark; Lure of the wilderness (1952), with Jeffrey Hunter; Treasure of the golden condor (1953), opposite Cornel Wilde; and Taxi (1953), as a newly landed Irishwoman assisted by a New York cabdriver in searching for the American husband who abandoned her. She gave a lively and rounded performance in Man in the attic (1953), another take on the Ripper legend, as the showgirl niece of the murderer’s landlord and his wife, a role that highlighted her singing and dancing talents. Her co‐star, Jack Palance, suggested that she be billed ‘the Dublin Dietrich’, and some reviewers detected her potential as a live nightclub performer.

By 1954 she had left Fox; it is possible that the mental instability and problems with alcohol that would later become obvious were already afflicting her career. She appeared with Richard Conte in an intriguing noir, The big tip off (1955), and made two films in London: Tiger by the tail (1955), as the reliable English secretary of an American journalist pursued by gangsters, and Impulse (1955), as a seductive femme fatale. Her star waning, in the latter 1950s she made five films in Italy, where she was promoted as a brunette Grace Kelly. Giovanni dalle bande nere (The violent patriot) (1956), a costume swashbuckler, played the USA drive‐in circuit. Her last film was La congiura dei Borgia (1959).

Smith married firstly, after a whirlwind romance in London (1951), Bryan Forbes, an aspiring British actor, and later a successful screenwriter, director, novelist, and memoirist. Though he followed her to Hollywood, the marriage had broken by the end of the year, but not before Smith had succumbed to studio pressure and terminated a pregnancy by abortion. The couple divorced in 1955. She married secondly, in Italy (1956), Araldo Crollolanza, the photographer son of a former fascist senator (who opposed the match and disinherited him); the marriage failed by 1959. In the latter year Smith began a relationship with Paul Rotha (1907–84), a leading British documentary filmmaker, film historian, and critic, whose portfolio included two films of Irish interest: No resting place (1951), a fiction film about Irish travellers, and Cradle of genius (1958), a short documentary on the history of the Abbey theatre, which received an Oscar nomination. Smith accompanied Rotha to Germany and Holland during research and filming of a documentary on the life of Adolf Hitler (1961) and a fiction film based on the Dutch wartime resistance (1962). The couple shared leftist, anti‐imperialist political convictions, and a passion for jazz music; Smith painted, and cultivated her interest in the fine arts, while Rotha contemplated writing a book about her life and casting her in films. Ominously, they also shared an addiction to heavy drinking; ferocious rows, often physically violent, became a commonplace. In December 1961 Smith knifed Rotha in the groin and slashed her own wrists in their London flat; pleading guilty to unlawful and malicious wounding, she served three‐months’ imprisonment in Holloway. Defence counsel at her trial referred to two previous suicide attempts, and described her as ‘a poor but beautiful girl who was squeezed into a situation of sophistication and fame when emotionally quite unable to cope with it’ (Times, 12 Jan. 1962).

For the next two decades Smith and Rotha continued their turbulent, on‐again, off‐again relationship, marked by mutual alcoholism, unemployment, increasing financial hardship, episodes of domestic violence, and Smith’s repeated suicide attempts, and admissions to psychiatric hospitals and halfway hostels. During intermittent periods of recovery, she worked as a cleaner and (incredibly) in childcare. After stabbing Rotha in the back in 1968 she received three‐years’ probation; another stabbing in 1975 resulted in a second term of imprisonment. The couple, who married in 1974, did not break up permanently till 1979. In the early 1980s Smith was living destitute and homeless in London; former colleagues would see her, virtually unrecognisable, drinking in Soho Square. The few friends who attempted to retain contact lost track of her in the mid-1980s. She is reported to have died of natural causes 30 June 2003 in Islington, London.