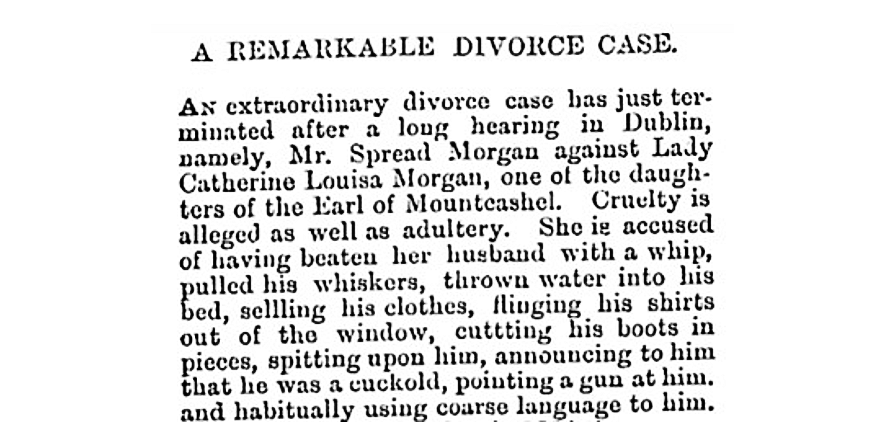 A victim of her husband’s alcoholism, and unwilling to play the expected role of the patiently suffering wife, Lady Catherine Morgan became the focus of nineteenth-century Ireland’s most sensational divorce case.

Morgan, Lady Catherine Louisa (c.1838–1886), divorcée, was born in Moore Park, Co. Cork, youngest daughter among seven children of Stephen Moore (1792–1883), 3rd earl of Mountcashell, and his wife Anna Maria, daughter of Samuel Wyss of Berne, Switzerland. She married (10 August 1858) Richard Spread Morgan of Bridestown, Co. Cork, a captain in the Royal Cork Artillery, and went to live with him in Cork. The marriage soon ran into difficulties – they quarrelled badly within six weeks – and on 6 March 1862 Lady Catherine made her first appearance in court to prosecute her father-in-law, Mr Edward Morgan, for assault. He was acquitted. The couple had one son (who died in infancy) and three daughters before they separated in 1868, after which she lived briefly in London with her sister and then with her parents in Moore Park. In 1871 she sued her husband for maintenance at a court in Cork, where he accused her of licentiousness and drunkenness. The judge found in her favour. In 1876 Captain Morgan issued divorce proceedings, repeating his former allegations; she made a counter-claim of cruelty. The case, which opened in Dublin 26 June 1876, developed immediately into a cause célèbre; by the third day the court was so crowded that the police were called in to keep control, and only members of the bar and those of the public who had passes from the sheriff's office were admitted.

Captain Morgan, represented by Messrs Ryan and Boyd, accused his wife of adultery with numerous parties and depicted her lovers as straddling all social classes, from his best friend to a solicitor, a groom, a dog boy, and a priest whom she had allegedly seduced on a train. She denied all charges (insisting that she had never spoken to a priest in her life) and alleged drunkenness, violence, obscenity, and barbarous cruelty on his part, painting a miserable picture of a makeshift life in a series of cramped lodgings where her children starved and she had only one servant. Captain Morgan emerged badly from the outset: his drunkenness was widely testified to, he was further proved to have barged into a barracks in Kilworth, Co. Cork, whence his wife had fled for protection, and to have been jailed in 1866 for assaulting a Mr Hunt, whom he claimed was his wife's lover. His manner did not endear him to the court; he admitted carelessly to not being fond of his third daughter, whose paternity he doubted. Lady Catherine emerged as the classic damsel in distress and was loudly cheered on leaving court on 1 July. The prosecution embarked on, but did not pursue, a line of questioning which indicated that she had been successfully blackmailed for some years by their principal witness, her former servant, Mary Gould (née Corscadden). The outlandish claims by her husband and Mary Gould of unnamed priests and soldiers weakened their credibility; the lady was protected by her rank from their more substantial evidence relating to a dog man and a groom. Justice Warren in his summing-up asked the jury to consider the likelihood of the daughter of an earl behaving in the described fashion. The case was decided on 3 July after a speech of two and a half hours by the defence, a speech of an hour and twenty minutes by the prosecution, and an hour and a half's summing-up by the judge. The jury took four and a half minutes to acquit Lady Morgan of all charges. This was met by muffled cheering, the judge having threatened to take into custody anyone guilty of excessive applause. A man resembling Captain Morgan was almost lynched. Lady Catherine's relief was perhaps offset by the news the following day of the death of her mother. The Irish Times, having embraced the proceedings with thinly disguised gusto and being at least partially responsible for whipping up public interest since it had devoted an unprecedented two full pages to each day of the hearings, pulled itself up short after the verdict with the comment that ‘we felt the pages of respectable journals were polluted by the publication of evidence’ (4 July 1876). Lady Catherine disappeared from the public view, her death ten years later on 18 May 1886 went unnoticed by the national papers.

Her eldest daughter, Louisa Jane Moore Morgan (b. 1859), suffered similar marital difficulties. She married (8 June 1878) her cousin Edward Spread Morgan Westropp (b. 1856) and lived with him for five years in her grandparents' home in Moore Park. He seemingly resembled his uncle – her father – in being drunk and foul-mouthed, and went beyond him in cruelty; he allegedly beat her and their three children repeatedly. In June 1883 they separated; the decree of divorce was obtained in November 1885, but as the 1857 divorce act did not apply to Ireland, the dissolution of an Irish marriage could only be granted by an act of parliament. Her case was accordingly presented in the house of lords, 17 May 1886 (the day before her mother's death), and her divorce was then granted.