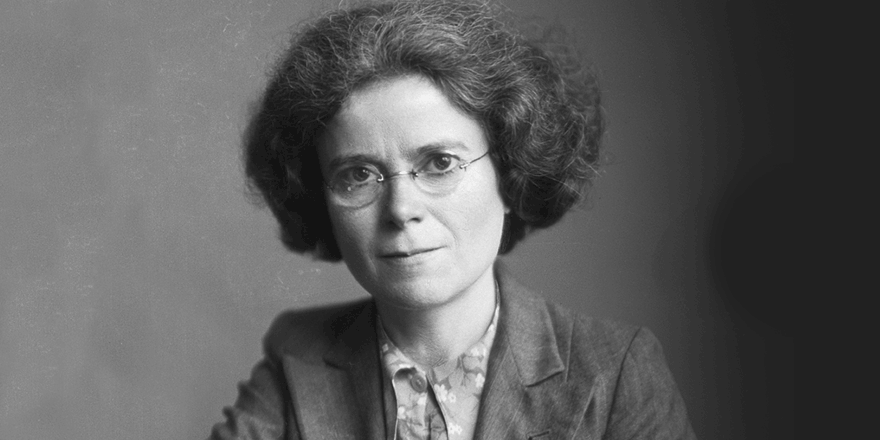 Lonsdale, Kathleen (1903–71), X-ray crystallographer and pacifist, was born 28 January 1903 in Charlotte House, Newbridge, Co. Kildare, youngest among ten children of Henry Frederick Yardley (d. 1923), an English-born former soldier and postmaster of Newbridge, and his wife Jessie Cameron, of Scots descent. Her early life was difficult: the family had little money and relations between her parents were strained. Four of her six brothers died in infancy; another brother, Fred Yardley, had to leave school to go out to work, but became a pioneering radio officer, who in 1912 received the last radio signals from the Titanic. Her mother was a forceful character, who brought her family up in baptist beliefs. Kathleen attended the Newbridge village school for a short time before her mother, worried about the political developments in Ireland, took the children to England in 1908. They settled at Seven Kings, Essex; Henry Yardley lived elsewhere and seldom visited them. Kathleen attended the local elementary school, then won a scholarship to the county high school for girls at Ilford (1914–19), and was the only girl who opted to take classes in physics, chemistry, and higher mathematics at the Ilford Boys School. She was a brilliant, determined student and was awarded the county major scholarship and the Royal Geographical Society's medal for achieving the highest marks in geography papers. At the age of sixteen she entered Bedford College for Women, London (part of the University of London), where she studied mathematics. She gained a University of London scholarship after one year and transferred from mathematics to physics, because she preferred experimental work.

In 1922 she placed first in the honours B.Sc. examination, obtaining the highest marks awarded in ten years, and came to the attention of the Nobel prizewinner W. H. Bragg, one of the examiners, who offered her a position on his research team at University College, London (UCL), and later in the Royal Institution. There she worked on X-ray diffraction of crystals of organic compounds, beginning with those of succinic acid, the di-basic acid first synthesised by Maxwell Simpson. With a fellow student, W. T. Astbury, she published in 1924, aged just 21, ‘Tabulated data for the examination of the 230 space-groups’ in the Transactions of the Royal Society, a major contribution to crystallography. Yardley was awarded an M.Sc. (1924) and a Ph.D. (1927).

On 27 August 1927 she married Thomas Jackson Lonsdale, an engineering research student at UCL, and moved to Leeds, where he got a research assistantship. Somewhat unusually for the time, Thomas Lonsdale encouraged his wife to continue her scientific work, and she joined Leeds University chemistry department as a part-time demonstrator. There she made her most important contribution to chemistry by proving, by X-ray diffraction of crystals of hexamethylbenzene, that the benzene ring was flat. This had been a major topic of interest in chemistry for sixty years. She was also first to use Fourier analysis of X-ray patterns to study the structure of an organic molecule, another benzene compound, hexachlorbenzene. The Lonsdales’ first child, a daughter, was born in 1929, and shortly afterwards the family returned to London. Another daughter and a son were born (1931, 1934), but she managed to continue her scientific research, working on calculations at home while the children were babies, then took a post at the Royal Institution as research assistant to Sir William Bragg and later to Sir Henry Dale. She worked on magnetic anisotropy in crystals and molecules and also pioneered techniques such as divergent beam X-ray photography for investigating the surfaces and structure of crystals.

She was awarded the degree of D.Sc. in 1936. In 1946 she was appointed reader in crystallography at UCL, and was appointed professor of chemistry and head of the department of crystallography (1949), the first woman professor in UCL. She began her teaching career at the age of 43; her students generally found her lectures challenging at best, but Lonsdale's initiatives in undergraduate teaching of crystallography, particularly the practical aspects, were copied in other universities, and she shared with J. D. Bernal the teaching in an inter-collegiate M.Sc. course in crystallography. She thus trained many of the next generation of crystallographers. During her time at UCL (1949–68) she was at last able to develop her own research group. Interests included photo-reactions and order-disorder transitions in the solid state, thermal vibrations and diffuse scattering in crystals, various pharmacological compounds, and the constitution of bladder and kidney stones. She also worked on synthetic diamonds. The tables that she had compiled with Astbury established the theoretical basis of structure analysis; her book Simplified structure factor and electron density formulae for the 230 space groups of mathematical crystallography (1936) contained an important development of that work, and she made further contributions to understanding and study of X-ray analysis of crystals by putting enormous effort into editing three volumes of the second series of International tables for X-ray crystallography, (1952, 1959, 1962), for many years the standard handbooks in the field.

In 1943 she was an invited lecturer at the Dublin Institute of Advanced Studies summer school, along with Erwin Schrödinger, Max Born, and P. P. Ewald; the taoiseach, Éamon de Valera, attended all the lectures. She was a visiting professor in several American universities. In 1945, after the Royal Society held a postal poll of existing fellows on the possibility of women being elected, she and the biochemist Marjory Stephenson were chosen as the first female fellows of the Royal Society; she was a member of the council and vice-president of the Royal Society in 1960–61. She was awarded the Royal Society's Davy Medal, its preeminent award in chemistry, in 1957 (she donated the prize money to a fund to establish a lecture in memory of W. H. Bragg). In 1968 she became the first female president of the British Association for the Advancement of Science; she received honorary doctorates of science and of law from the universities of Wales, Leicester, Manchester, Leeds, Dundee, Oxford, and Bath. In 1956 she was appointed Dame Commander of the British Empire. In 1966 a rare form of hexagonal diamond, found in meteorites and produced synthetically, was named ‘lonsdaleite’ in her honour.

After their marriage, both Lonsdales became quakers ‘by convincement’; she identified strongly with quaker insistence on absolute opposition to war. She had been a committed pacifist since her experiences as a child during the first world war. At the beginning of the second, though as a mother of young children she would have been exempt from any wartime duties, she refused on conscientious grounds to register for employment or civil defence duties which would have helped the war effort, and was fined £2. When she refused to pay the fine, she was committed to Holloway prison for one month in February 1943. While imprisoned, she had to do the usual prison work, and experienced much of the rigour and privation of prison life, though she was able in the evenings to continue her scientific work on anomalous reflexions. As a result of her experiences, she became an advocate of prison reform, and was appointed an official visitor to a prison at Aylesbury and to Borstal. She travelled widely to speak at conferences and study prison conditions abroad. During the war she opened her home to refugees from Germany.

In later life she became increasingly concerned about the role that science was being asked to play in military preparations, and helped found the Atomic Scientists Association. Dame Kathleen also helped establish the Pugwash movement to work for an end to armed conflicts, was a member of the East–West committee of the Society of Friends, and attended conferences and meetings all over the world. Of her many articles and pamphlets on the religious case against war and militarism, the most notable publication was Is peace possible? (1957), published by Penguin Books, which supported total nuclear disarmament. She was a vegetarian and a teetotaler.

Kathleen Lonsdale did a great deal, and not just as a role model, to encourage young people, especially women, to take up science as a career. She took every opportunity to speak in schools, and published articles on the practical adjustments that society needed to make to enable professional women to contribute successfully and happily in both domestic and public spheres, as she herself had been able to do. In 1965 she moved with her husband on his retirement to Bexhill-on-Sea, Sussex, continuing to commute to London for five hours a day until her own retirement in 1968, when she became emeritus professor of UCL. She continued to work and publish, almost until her death in University College Hospital of bone marrow cancer on 1 April 1971. She was survived by her husband and her three children. In 1981 the chemistry building at UCL was renamed the Kathleen Lonsdale building, and in 1998 the new Aeronautical and Environmental Building at the University of Limerick was also given her name. A plaque marks her birthplace in Newbridge. She is also commemorated by the British Crystallographic Association, in an annual lecture named for her, and National University of Ireland, Maynooth, which gives a student prize named after her.

A full list of her many scientific papers and a partial list of her publications on her other interests can be found in Dorothy Hodgkin, ‘Kathleen Lonsdale’, Biographical memoirs of Fellows of the Royal Society, xlv (1975), 478–84.