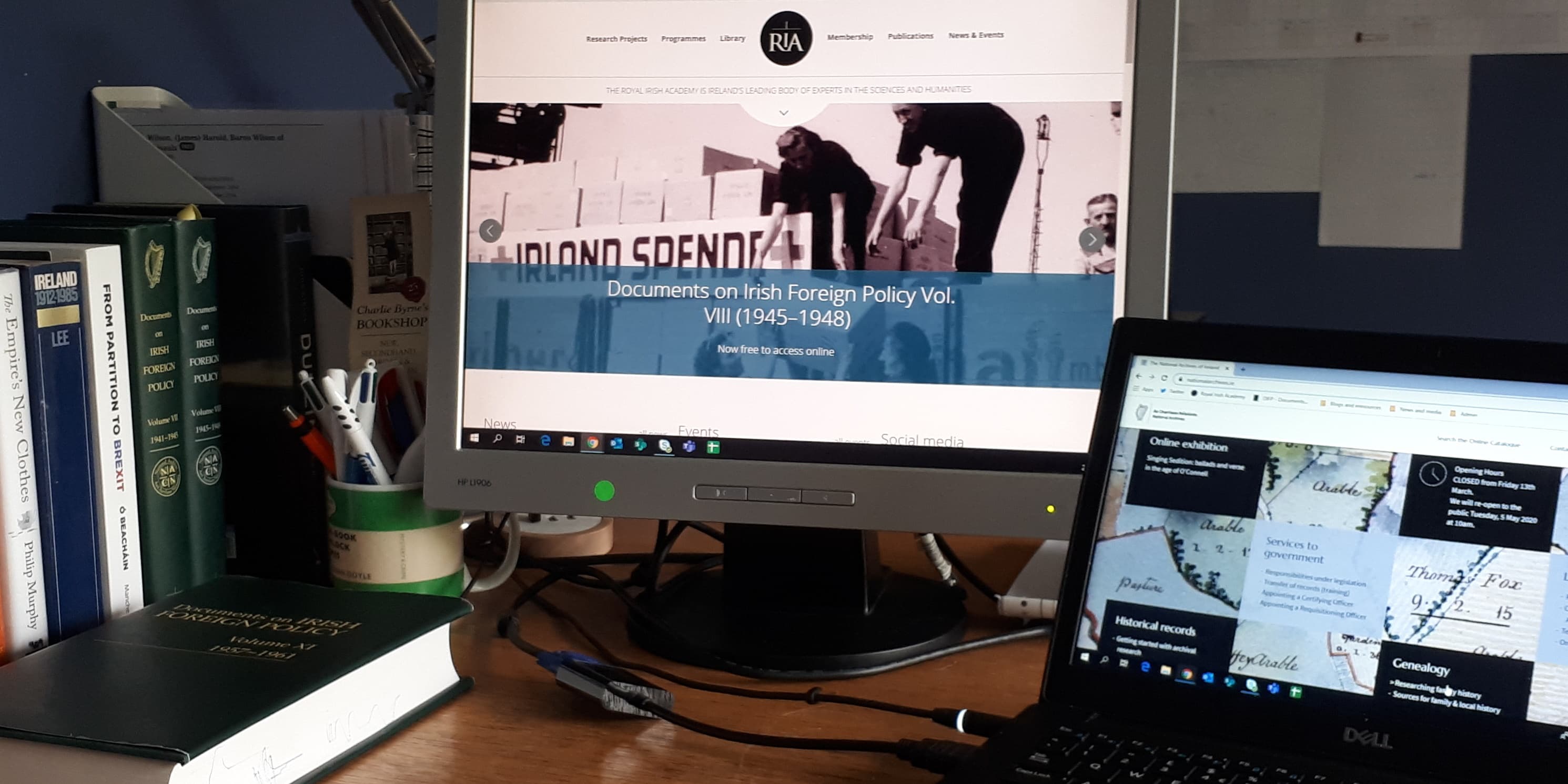 DIFP and other online resources

The volumes in the Documents on Irish Foreign Policy (DIFP) series have been published since 1998 and appear in hard copy every two years (Vol. XII, covering 1961-65, will be published later this year). But we have also published the contents of volumes I-VIII (covering 1919 to 1948) online and will expand this online coverage to 1951 when we release Vol. IX on our forthcoming new website (also later in the year). In the meantime, and in the circumstances of the COVID-19 pandemic, here is a short guide to what one might look for in DIFP online, and to some other online resources that might be of interest.

DIFP is not just a history of Irish diplomacy; it explores Irish history through diplomacy. The range of issues that Irish diplomats were forced to grapple with was remarkably wide and, consequently, the DIFP series contains material (and often eyewitness testimony) relating to Ireland’s social, economic, cultural, military and political history since the revolutionary era. It also contains first-hand accounts of the Irish state’s engagement with the wider world, from the fundraising efforts of the First Dáil in the US in 1919-20 to life in Berlin during the Second World War. DIFP operates in a landscape in which primary sources – the raw material from which history is made – are now available online to an unprecedented degree, thanks to the work of the archivists and curators who are the unsung heroes of the study of history; the material in their care is now accessible as never before.

In this short blog post we want to highlight some other online resources that touch upon the preoccupations of the DIFP series and the lives of those who appear in it, especially (though not exclusively) for the current timeframe for which DIFP is available online. They can be cross-referenced with the DIFP series or explored in their own right. As well as primary sources, these sites often have useful supporting and contextual material. For the sake of convenience, we’ve chosen websites that contain material that is generally (though not always) free to access: documents, publications, images, audio-visual material and artefacts. Many of these will be contained in multiple collections, but these are usually easy to navigate. And, it goes without saying, most of what they contain is of relevance to far more than just the DIFP series.

DIFP publishes records made available by the Irish state, so for starters, we have opted for the online collections of state bodies like the Houses of the Oireachtas, the Central Statistics Office, ESB Archives and the Military Archives. National Cultural Institutions such as the National Archives (one of the DIFP partners) and the National Library all have documentary and visual material available online. And audio-visual material made available by RTÉ Archives and the Irish Film Institute offer invaluable resources of another kind with which to explore modern Irish history.

Academic resources are also treasure troves of material. While we haven’t yet reached 1969 in our published series, CAIN is a remarkable compendium on the ‘Troubles’, and includes many Department of Foreign Affairs and Trade files for the period after 1969. Then there are the online collections of universities, such as NUI Galway Archives, UCD Archives and UCD Digital Library, Trinity College Dublin’s Digital Collections, and the University of Limerick’s Digital Library. We should also give a special mention to our RIA colleagues in the Digital Repository of Ireland, who are publishing a very diverse range of material in an easily accessible online archive.

Then there are international resources. Ireland is not the only country to publish material on its foreign relations; many other countries do so as well and also make them available online: the work of our international counterparts can be explored through the website of the International Committee of Editors of Diplomatic Documents. For the period that DIFP currently covers online, the UK and the US loom large, and their institutions are also worth mining for Irish material. For the US, key institutions are the US National Archives (especially its DocsTeach resource) the Library of Congress, and the network of Presidential Libraries. For the UK, the British Empire and the Commonwealth, we would suggest exploring the National Archives of the United Kingdom, the BBC Archives, the British Cartoon Archive, and British Pathé. Alongside these, the online material of international bodies such as the European Union and the United Nations, and the extensive and remarkable Europeana online archive have a great deal to offer as well.

This is a small and subjective selection of some of the resources that have been of use to the DIFP project; there are far, far more available out there. Most of these resources are open access, and we should say that they cover far more than the years 1919-1948 (the period we currently have available online). They also, by their very nature, cover much more then just Ireland’s external relations; if you take the time to explore them, who knows where you might end up?