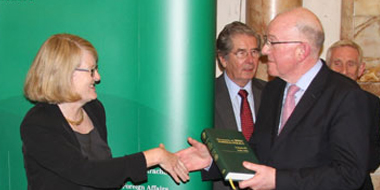 DIFP IX is launched by Minister for Foreign Affairs and Trade

25 November 2014
On 5 November we received the first copies of DIFP IX and through the month we set in place and rolled out a major publicity campaign on the new volume.

Michael appeared on the Seán O’Rourke Show on RTE1 on 13 November speaking about the new volume and on 17 November Stephen Collins covered the volume in the Irish Times. DIFP editor Prof Ronan Fanning had an article on the volume in the Sunday Independent on 23 November. Michael discussed DIFP IX with Myles Dungan on The History Show on RTE Radio 1 on the same day.

The highlight of the month was the launch of DIFP IX by Minister for External Affairs and Trade Mr Charlie Flanagan TD at a packed reception attended by over 200 guests at Iveagh House on 20 November. Minister Flanagan's speech can be found here.

In light of the release of the letters between Jean-Claude Trichet of the ECB and Minister for Finance Brian Lenihan, Michael appeared on The Business on RTE Radio 1 on 8 November discussing significant historical documents involving Ireland’s finance ministers since 1922.