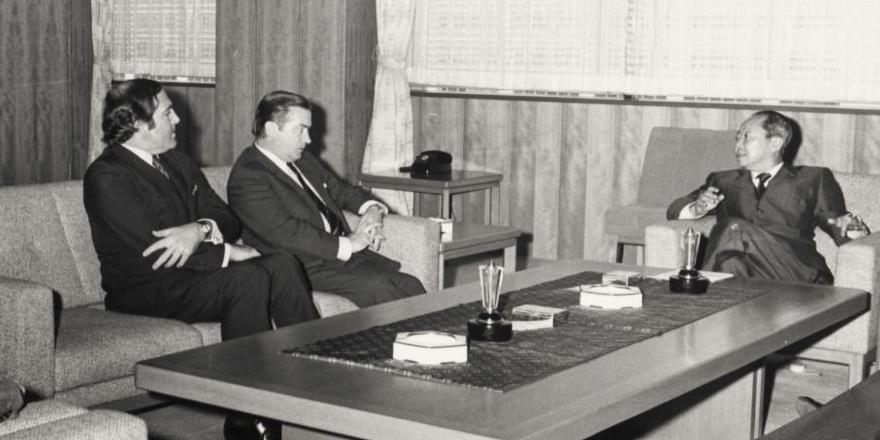 Our October exhibtion co-curated with the National Archives of Ireland looks at Irish-Japanese relations and Taoiseach Jack Lynch's visit to Japan in 1968.

Ireland and Japan formally established diplomatic ties in 1957. The following decade saw both countries steadily increase economic and trade links from an almost non-existent base. Those links received two significant boosts in 1968. In February of that year the Japanese government appointed Bunshichi Hochi as its first resident ambassador in Dublin. Six months later, Taoiseach Jack Lynch and his wife Máirín arrived in Japan for a formal three-day visit - the first by an Irish head of government. The opportunity was not lost on ‘Sapporo Guinness Company Limited’ (a joint venture between the Irish and Japanese brewing companies), who wrote to Lynch on 13 August 1968 enclosing a gift of Guinness brewed at the Sapporo Brewery in Tokyo and inviting him to visit. The letter also informed Lynch that the brewery had prepared another sample of their Guinness that he might pass on to the Japanese prime minister or foreign minister ‘with the explanation, if possible, that Guinness is the pride of your country as stamina increasing beer’.

The Taoiseach’s visit to Japan was initially prompted by a private invitation to his wife, Máirín, to formally launch Gulf Oil’s supertanker Universe Ireland; she did so at the Ishikawajima-Harima Heavy Industries shipyard in Yokohama on 15 August 1968. Gulf Oil were then in the midst of constructing a major oil terminal on Whiddy Island in Bantry Bay, Co. Cork, for trans-shipment of oil from the Middle East to European refineries.

Along with Hochi’s appointment as Japanese ambassador to Dublin, the visit cemented the growing importance of Japan to Ireland’s economic development. Two years later several Irish state and semi-state bodies participated at the 1970 World’s Fair in Osaka, and by the end of 1973 the Industrial Development Authority and Córas Tráchtála had established a presence in Japan. Perhaps most important was the decision by the Department of Foreign Affairs to open an embassy in Tokyo, with Robin Fogarty appointed as Ireland’s first resident ambassador to Japan in September 1973.

The exhibition is on display throughout October 2019 in the lobby of the National Archives of Ireland, Bishop Street, Dublin 8, which is open from 9.30am to 5pm Monday to Friday. The documents on display, along with some additional items, can also be viewed online here.

Image: Ireland’s first ambassador to Japan, Robin Fogarty, and Minister for Industry and Commerce, Justin Keating (seated together on couch) meet with Japan’s Foreign Minister, Kiichi Miyazawa, in Tokyo, October 1975. Image reproduced by permission of the Director of the National Archives of Ireland.