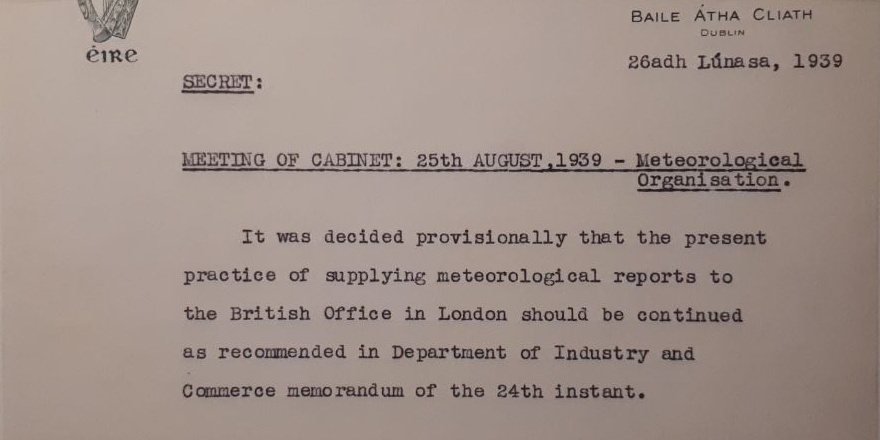 To mark the 75th anniversary of D-Day, our June exhibition co-curated with the National Archives of Ireland looks at how the Irish government provided meteorological information to Britain and the Allies in the Second World War

It was no secret in the months leading up to the Normandy landings on D-Day, 6 June 1944, that the Allies were poised to mount operations to liberate occupied Europe from Nazi control.  The question was when, and where, the Allied expeditionary force would land.

The Allies feared the leakage of plans for ‘Operation Overlord’ via neutral Ireland. Co-operation between Irish, British and United States military intelligence and diplomats ensured that Ireland was in effect ‘locked down’, with Irish agreement, so far as transport and communications were concerned in the weeks leading up to 6 June 1944.  The supreme commander of the Allied Expeditionary Forces in Europe, the US General Dwight D. Eisenhower, gave the orders to begin the Allied invasion of Nazi-occupied Western Europe based on a weather report sent by Maura and Ted Sweeney from Blacksod Bay weather station in County Mayo.

This was unsurprising. From an early stage Éamon de Valera, as Taoiseach and Minister for External Affairs, made it clear that he and his government would show a ‘certain consideration’ for Britain’s requirements in wartime. Despite Ireland’s officially neutral stance, the prospect of co-operating with the British during the war was very real, as this 1940 memorandum shows. The documents in our June exhibition in the National Archives of Ireland touch upon an Irish connection to the D-Day landings, by showing that the provision of meteorological information to the British (and vice versa) had been discussed, and agreed, by the Irish government from the earliest months of the war. These include the minutes of an emergency planning meeting suggesting that de Valera would ‘probably agree’ to the continued supply of meteorological information to Britain in time of war, along with a note to Minister for Industry and Commerce Seán Lemass confirming that the Cabinet had agreed to continue to supply meteorological information to Britain.

With regard to the prelude to D-Day, the Irish Meteorological Service had seen a clear period coming in from the Atlantic during which the amphibious assault could be launched with air cover (German meteorologists later admitted they had not forecast this brief clear spell). Eisenhower accordingly moved the date of D-Day from 5 to 6 June 1944. The continued exchange of weather information had been agreed by the Irish and British governments in the run up to the outbreak of the second World War. De Valera's view was that such exchanges did not contravene Ireland’s neutrality in the Second World War; they had continued throughout the Battle of Britain, and beyond.

The documents in question are on display throughout June 2019 in the lobby of the National Archives of Ireland, Bishop Street, Dublin 8, which is open from 9.30am to 5pm Monday to Friday, and can be viewed online here. Our March and April exhibits are also currently on display outside the NAI reading room.

Image reproduced by permission of the Director of the National Archives of Ireland.