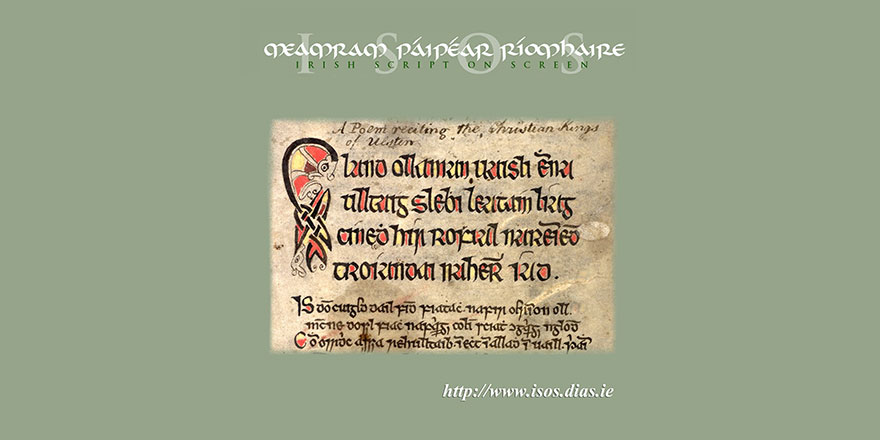 Latest Library Blog post. A behind the scenes look at the digitisation of the Cathach of St Colum Cille for Irish Script on Screen (ISOS) by Anne Marie O’Brien, DIAS.

On the 7th of December 2021, marking the 1500th anniversary of St Colum Cille, the long awaited online viewing of the 6th century Cathach of St Colum Cille was launched on the Irish Script on Screen (ISOS) website. This was made possible by the collaborative partnership of the School of Celtic Studies, Dublin Institute for Advanced Studies and The Royal Irish Academy.

This Latin manuscript is the oldest surviving manuscript in Ireland containing some of the earliest examples of Irish writing. Although the Cathach is badly damaged it enjoys a unique status. It has the earliest known Irish copy of the Gallicanum Psalter in a very pure form. Its accompanying rubrics – known as the St Columba series – are the first witness of such headings in western Europe. See Prof. Pádraig P. Ó Néill’s excellent account of The Cathach accompanying the digitised images on the ISOS website.

The digitisation of this ancient medieval manuscript commemorates fifteen hundred years since the birth of Colm Cille (Saint Columba). Born in Donegal and patron of Derry (Doire Cholm Cille, the oakgrove of Colmcille), Colm Cille was a key figure in the early medieval Christian Church. He was greatly revered particularly in his native Ireland and in Scotland where he spent most of his missionary life, but also throughout Continental Europe.

Literacy and writing are a large part of the legacy surrounding St Colum Cille. He belonged to the period when Ireland was hailed as ‘The Land of Saints and Scholars’ from its recognition as a time known for educational excellence that produced such treasures as the Book of Kells, the Book of Durrow and many other priceless manuscripts adorning many libraries. 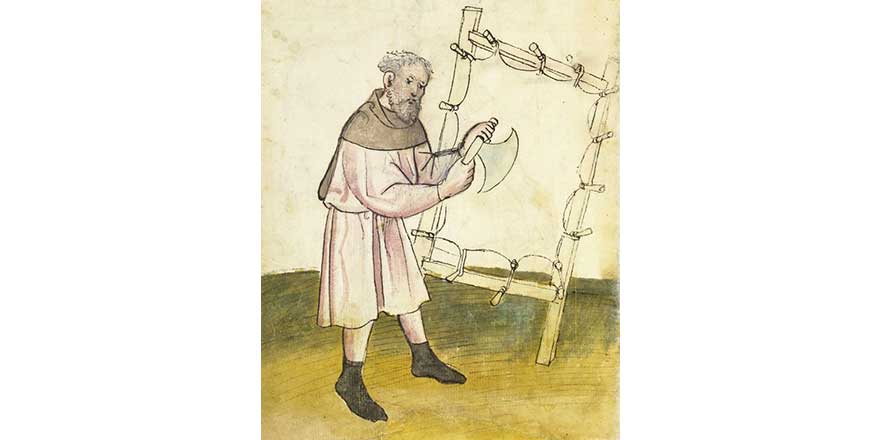 As the Cathach was produced in the 6th century, it was made entirely of vellum. Paper did not become the dominant alternative for manuscripts until the 16th century. A vellum manuscript was made from prepared animal skins, typically calf skin, which had been bleached, stretched and scraped until smooth. The treated skin was then tensioned on a wooden frame and left to dry. Vellum was a very durable material and a precious commodity. The production of vellum required quite a considerable investment. The animal would have to be killed before its potential for meat or dairy was realised. Therefore, only the wealthiest monasteries could afford vellum. This material can pose quite distinct challenges when digitising manuscripts made of it. 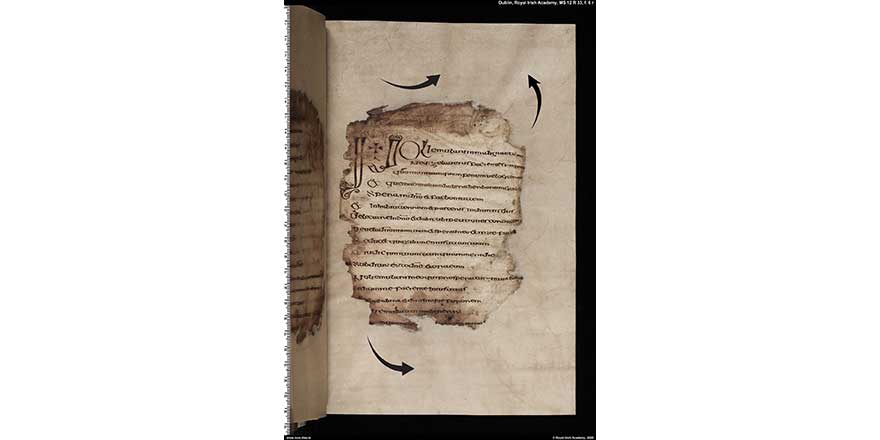 Even the slightest temperature and humidity changes by a person in the room will have effects on a vellum manuscript. This material likes to buckle when it's not happy and taken out of the controlled environment where it is stored can cause issues. These issues need to be addressed in the digitisation environment as they happen. As you can see here on this example (Fig.2) of one of the folios of the Cathach, the vellum repair which is made up of quiet a thin vellum, has already started to slightly move over time. When the manuscript was being assessed for digitisation, one of the major considerations was changes of humidity in the room and the significant factor it was going to impose. As the equipment needed to digitise the manuscript was going to heat up the room over the course of the day, a carefully planned setup of specifically placed humidifiers was needed to keep the room at an acceptable level of humidity. A stream of mist was also needed to cross paths with the vellum so it would stay moist throughout its time on the book cradle.

A Large format 5/4 Sinar camera with Phase One 1Q180 digital back was used to capture the images. It’s a case of old meets new – with the most cutting-edge digital back meeting one of the earliest camera styles. 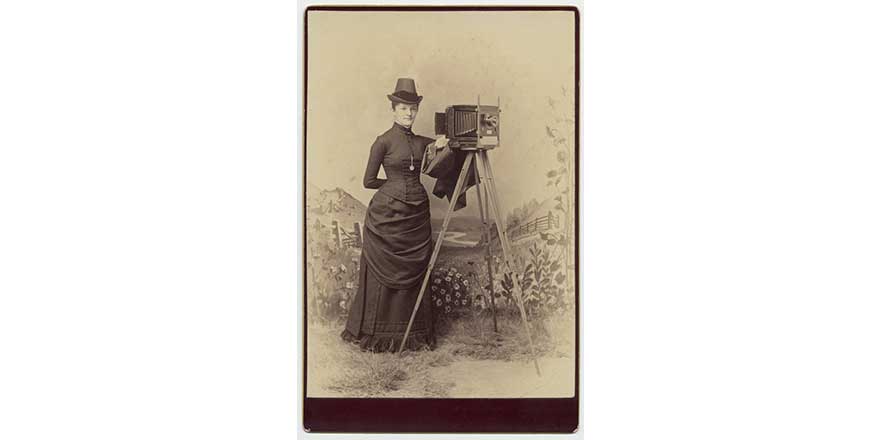 You might be familiar with this type of photographic image, depicting an old camera set up. Large format cameras were some of the earliest photographic devices. The reason we use a Large format camera on the ISOS project is based on the need to have access to a system that allows a mobility of focus. As we have already heard, the earliest Irish manuscripts were written on vellum or calf-skin, a substance that can produce a contoured surface. With the 5/4 camera we gain full control of manipulating and focusing on the four corners of the parchment. 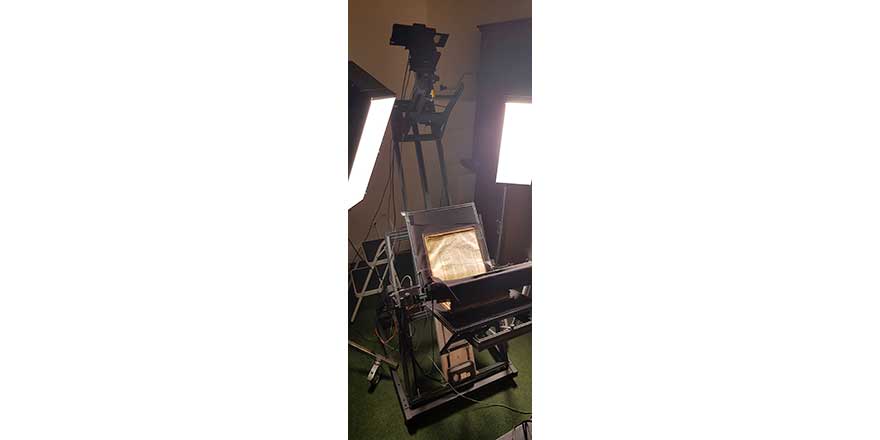 We used a non-intrusive capture mechanism called a Grazer conservation graded book cradle to digitise manuscripts on the ISOS project. Sensitivity to the fragile nature of the manuscripts is paramount. Prior to digitisation, a manuscript is examined and assessed to determine what precautions might be necessary during image-capture. After the manuscript is assessed, the cradle is used to fully support the manuscript at all times so that no undue stress is placed on the spine.

To keep heat to a minimum we use a North Light Copy system with cold lights. Temperature and humidity are always constantly monitored and maintained. 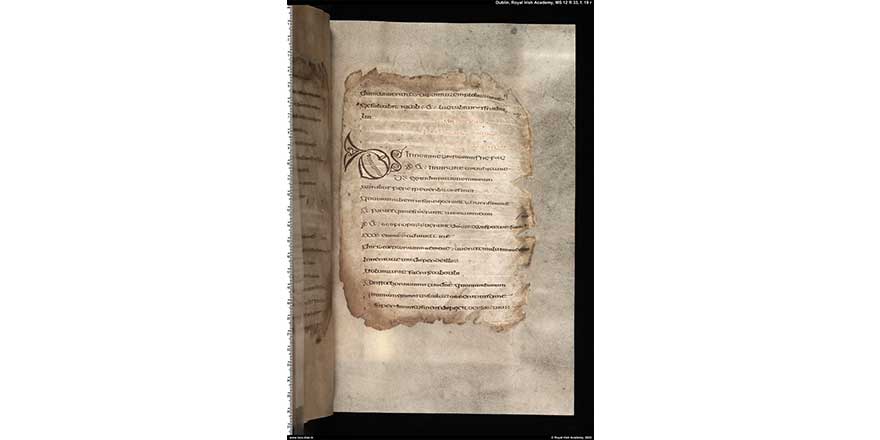 Fig.5 Pictured here is folio 19 of the Cathach which has now gone live on the ISOS site

When digitisation of the complete manuscript is finished, we then move on to the processing stage – where metadata is generated for the manuscript allowing us to incorporate it with the images as a new digital asset into our digital repository. 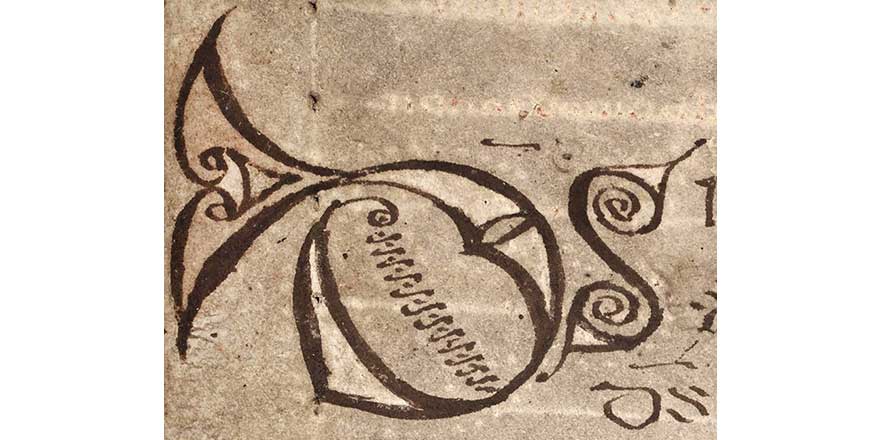 Fig.6 Here you can see how clear the detail is on the high resolution image

Irish Script on Screen was a project created by the School of Celtic Studies in 1999. It was one of the first digitisation projects established in Ireland and to date it is one of the longest running in Europe. The main bulk of the ISOS users come from the academic and third level sector but it is also freely accessible to the public. This has allowed these once hidden away treasures to be enjoyed by everyone.

ISOS continues to be a very successful project. Its growth has been greatly facilitated by the development of institutional partnership agreements with all the major repositories of Irish manuscripts in Ireland, including the National Library of Ireland, the Royal Irish Academy and Trinity College Dublin to name a few. ISOS has also developed internationally with The National Library of Scotland, Chatsworth, The State Library of Victoria, KBR the Royal Library of Belgium and The British Library coming on board. Collaborations to date reach some 28 different institutions here and abroad.

There are now over 435 Manuscripts on ISOS and upwards of 80,000 large-resolution images. All images are free of charge. Standard images are open access. By filling out a registration form, one gains full access to specialist high-quality images.

The study of Irish paleography and manuscript iconography comprises a culture in which students must familiarise themselves with scribal forms, abbreviations, etc. to decipher and transcribe script. ISOS is uniquely set up to allow these introductions. Its wide resource of collections – that would otherwise be unobtainable to new scholars embarking on their first encounters with Old Irish – provides a space where the exploration of fundamental aspects of codicology can begin.

The development of the Irish Script On Screen project wouldn't have been made possible without the generous collaboration of such institutions like the Royal Irish Academy, making their collections available for digitisation. The images along with the provision of relevant descriptive cataloguing information has resulted in the creation of an electronic resource which has become one of great cultural and educational importance. ISOS provides a powerful tool to progress the study of Irish paleography, manuscript studies and the exploration of Celtic culture for many future generations to come.