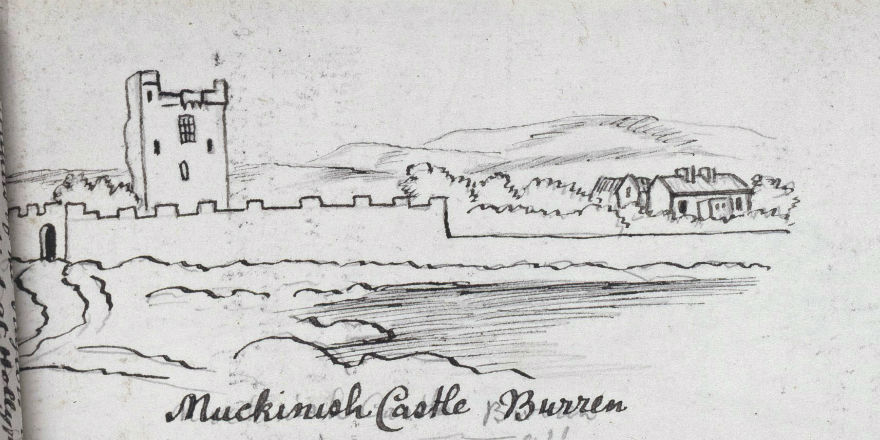 The high-quality hand-made paper used by Irish scribes in the seventeenth and eighteenth centuries was expensive. When making new manuscripts, scribes were careful not to waste valuable materials. Irish scribes routinely used abbreviations and contractions in their writing so that they could transcribe texts more quickly and use less space. Their work was influenced by a long tradition of manuscript-making using costly raw materials. The vellum (calf-skin) used to make medieval manuscripts had been even more expensive and scribes devised strategies to economise. Indeed, they couldn’t afford to waste faulty vellum leaves, and worked around flaws in the skin, as seen in the Book of Fermoy example illustrated here. 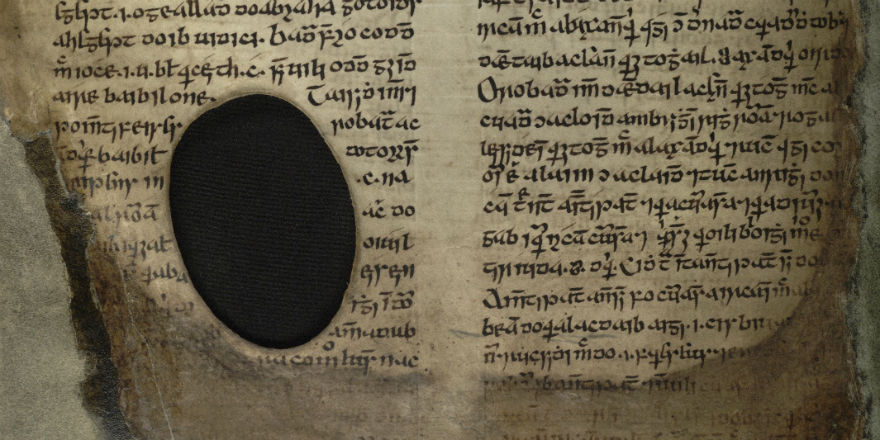 By the early eighteenth century, literacy in Irish had expanded beyond the professional learned class. It then became necessary to explain the standard scribal shorthand for the benefit of all who wished to learn to read Irish. The Book of O’Loghlen (RIA MS E iv 3) provides a good example of this process. The manuscript was compiled in 1727 by Aindrias Mac Cruitín (d.1738). He was a well-known teacher, poet and scribe. Together with his younger relative, Aodh Buí Mac Cruitín (Hugh McCurtin, d.1755), they were regarded as among the last hereditary scholars of their time. The Book of O’Loghlen was made for a member of the O’Loghlen family, long associated with the Burren, in County Clare. It contains poems in praise of members of the O’Loghlen family, some living, others from preceding generations. It is one of the last family poem-books to survive in the Gaelic tradition.  It also contains other popular poems, and some prose tales, notably from the Ulster Cycle and Fiannaíocht literary tradition. These tales were considered to be part of the story of the ancestry of the O’Loghlens. 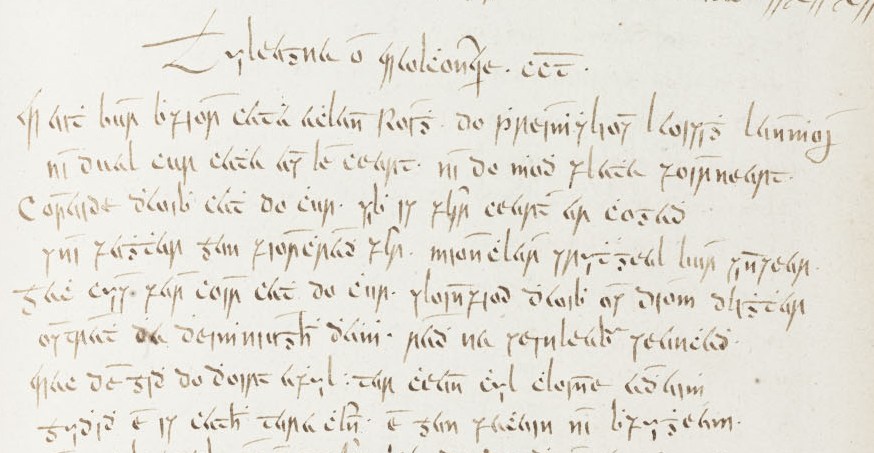 The person to whom the manuscript was presented was Brian O’Loghlen, a medical doctor living near Ennis, in County Clare. A later insertion records the births of his three children, Terence, Brian and Mary. These family notes are in English, a reminder that eighteenth-century Ireland saw a process of significant language change.

Family notes in English at the back of the Book of O’Loghlen, RIA MS E iv 3

Brian O’Loghlen may have valued his Gaelic heritage, but his skill in reading Irish was probably limited. This may explain why the scribe, Aindrias Mac Cruitín, included a guide to reading Irish at the beginning of the manuscript. Mac Cruitín also included a convenient table of the more common abbreviations that he used. His list still has value for students learning to read Irish manuscripts dating from the eighteenth or earlier centuries.  Just like some of the more creative shorthand used in text messages, the meaning of these contractions was not always immediately obvious. Indeed, much of the scribal shorthand was of Roman origin, adapted from Latin manuscripts. Some locally devised terms required ingenuity to decipher. The two ‘ll’s used as the abbreviation of the word ‘Dáil’ is one to puzzle 2moro.

The Book of O’Loghlen manuscript has recently been digitised by the Irish Script On Screen project. You can test for yourself whether the list of scribal abbreviations supplied by Aindrias Mac Cruitín almost 300 years ago is an adequate guide to reading the manuscript. 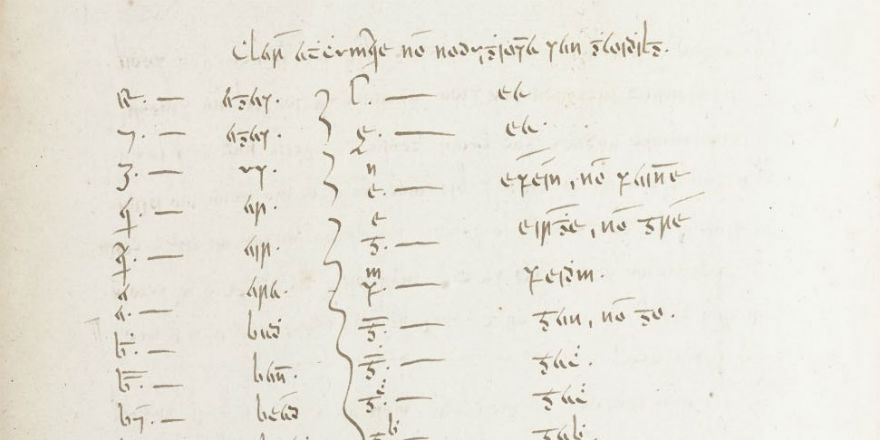 ‘Clár athchumaire nó noduighiachta san Ghaoidhilg’ [=List of abbreviations or notations in Irish], as explained by Aindrias Mac Cruitín in Book of O’Loghlen, 1727

Elements of the Irish Language (1728)

Coincidentally, in the year after this manuscript was written, Hugh McCurtin’s book on The Elements of the Irish Language grammatically explained in English was published at Louvain (1728). Clearly, there was a perceived demand both at home and abroad for guides to learning Irish, even though the language was in decline. The Mac Cruitín scholars aimed to cater for this demand, whether in customised manuscripts for individual patrons or in dual-language printed books for a wider market.

Hugh McCurtin explained in his book that he had spent 40 years studying the Irish language. Writing in 1728 he believed it was ‘now in its decay and almost in darkness, even to the natives themselves’. Referring to those who were abandoning the language, he wrote ‘I could heartily wish such persons would look back and reflect ... how strange it seems to the world that any people should scorn the language, wherein the whole treasure of their antiquity and profound sciences lie in obscurity’. (McCurtin, Elements of the Irish language, 1728, sig. A.2)