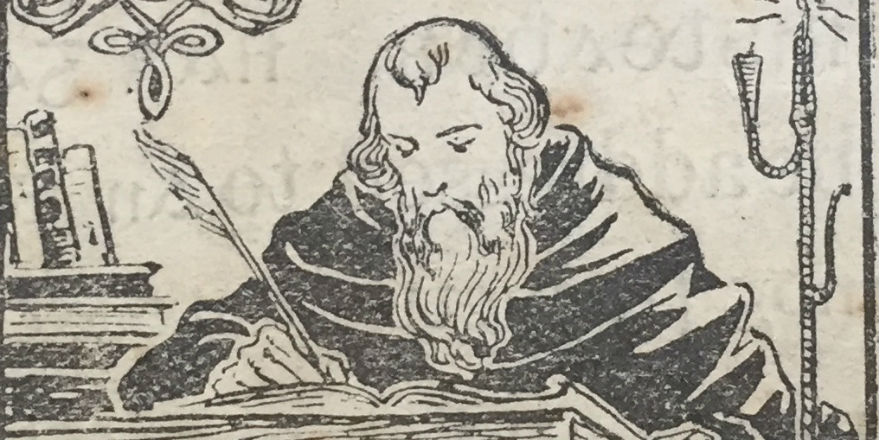 Making a new Book of Knockninny 1718

Three hundred years ago this month, Irish scribes were busy working on a new Irish manuscript. It was to be known as the Book of Knockninny.

It is rare that Irish scribes included a detailed description of the manuscript-making project on which they were engaged, but the Book of Knockninny is an exception. This 300-year-old manuscript is now RIA MS C vi 1 (catalogue no. 936) and extends to 890 pages. The story of its origins is worth recalling.

Séamus Mág Uidhir, principal scribe of the Book of Knockninny was employed by Captain Brian Mág Uidhir (c.1660-1726), of Knockninny, County Fermanagh. He continued the work of another scribe, Toirdhealbhach Ó Dóaláin. The scribe(s) had been given specific instructions by the patron, who knew exactly what kind of manuscript he wanted. Captain Brian Mág Uidhir envisaged a monumental ‘Book of Knockninny’ that would be an authoritative historical compilation, drawn from the best available historical sources in the Irish language.

The scribe recorded that two generations earlier, another Brian Mág Uidhir (c.1585-1655) had commissioned transcripts of historical works prepared by the Four Masters, along with other Irish texts, but that manuscript which dated from 1638 was in poor condition. It seems that the modern medium of paper used in the 1630s in preference to the more expensive vellum had produced a less-than-robust manuscript, and it had worn out. In 1718 Captain Brian Mág Uidhir decided to pay for a replacement. 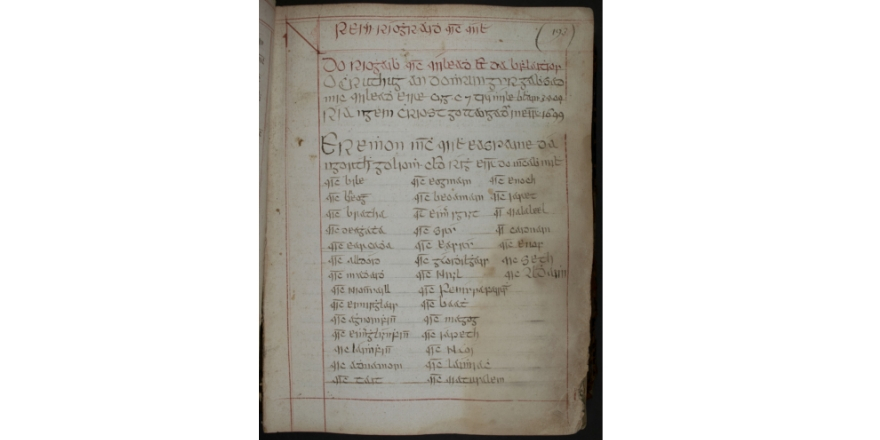 Succession of kings from the new Book of Knockninny, part 1, p. 193

The scribe explained the method used to source relevant historical texts for the new manuscript to be known as the ‘Book of Knockninny’. The patron, Captain Brian Mág Uidhir, contacted all Irish scholars in the region where he lived, asking them to bring to him whatever good Irish books they could acquire, and he supplied ink, paper and all other necessary materials, and paid the scribes for the copies they made.

‘And they brought together from every quarter the chief books of Conquest and the histories of the kingdom to Knockninny, so that the house is the source and dwelling-place of the best Knowledge to be found in Ireland. No one need henceforth search for more perfect or more reliable authorities than the books of Knockninny, if he is prepared to trust The Book of Lecan Mhic Fhirbhisigh, the Books of Ó Cléirigh, of Ó Duibhgeannáin, and Ó Maoil Chonaire, the Psalter of Cashel, the books of Clonmacnois, the poem of Ua Dubhagáin and Doctor Keating, with many other compilations approved by different authorities.’ (translated in Walsh, 1947, p.244) 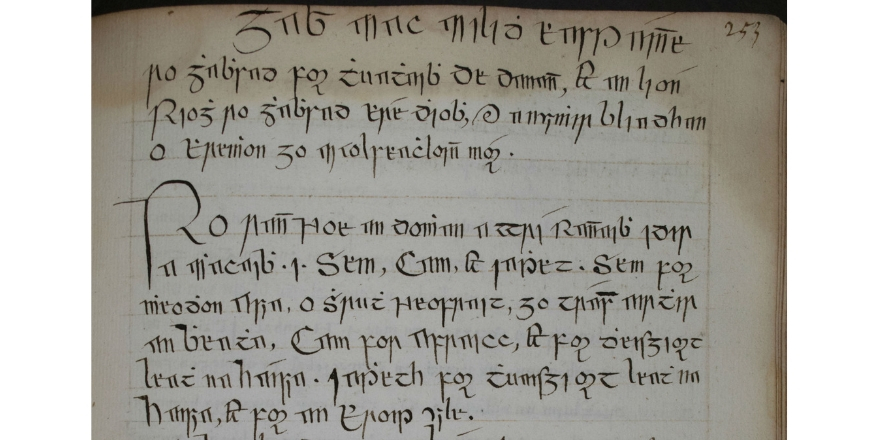 A note at the end of part one of the new Book of Knockninny gives the date of completion of that part as 22 December 1718. 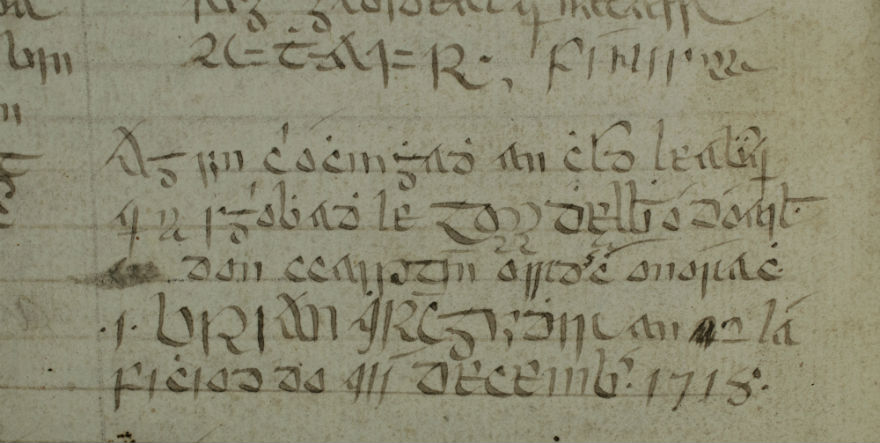 The scribe of the Book of Knockninny included an explanation of how the manuscript came to be written, and he was lavish in his praise of the patron.

‘And this Brian is the best known man in all Fermanagh and the surrounding counties … he is a person full of learning, wisdom and acumen replete with kindliness and charity, with generosity and noblesse; a maintainer of widows, orphans and the poor; a special benefactor of the clergy; a strong energetic smiter of the unjust and the law-breaker; a fair-minded upright individual promoting the common good; a keeper of a hostelry for English and Irish, musicians and literati; and we know not one who can be compared with him in any of these distinctions.’ (translated in Walsh, 1947, p. 243)

The compiler explained the cultural/political motivation and context for creating a new authoritative historical manuscript in 1718.

‘When the survivors of this poor Nation, after the wars between Kings William and James, were in misery and oppression, plundered and devastated, and under such persecution and slavery that scarce one of them had a care for amenity or refinement, this keen active-minded Patron bethought himself that the respected immemorial old Irish customs were in danger of being suppressed and lost in the country, and more particularly the mother tongue, the Gaelic, in consequence of the dispersal and wiping out of all the poets and professors of Ireland except a few.’(Walsh, 1947, p. 243)

Captain Brian Maguire was conscious of his status in society, and patronage of Gaelic scholarship was one way of enhancing his reputation, and his sponsorship of the Book of Knockninny was a way of associating his (minor) branch of the family with earlier influential leaders in Fermanagh.

The Book of Knockninny probably remained in Fermanagh for a time, but by the early nineteenth century it had been acquired by the Duke of Buckingham and was in his library at Stowe, Buckinghamshire. It was acquired by the Royal Irish Academy, along with its companion volume of genealogies, as part of the Stowe/Ashburnham collection presented by the British Government in 1883. Events to mark the 300th anniversary of its completion are being planned for 2019 in Knockninny. 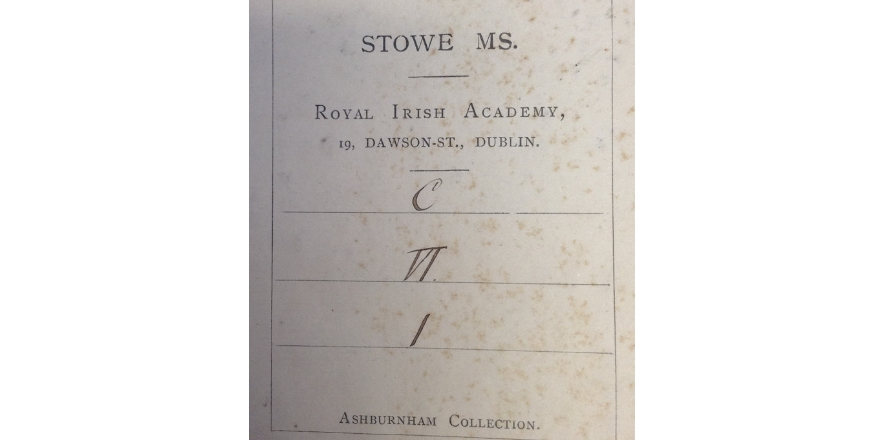 Microfilm copy of RIA MS C vi 1 is available on RIA microfilm N 1113. The manuscript has not yet been digitised.

Editions of some of the major prose texts found in the Book of Knockninny are published in the following works:

Katharine Simms, Bardic poetry database https://bardic.celt.dias.ie/ provides a guide to individual Irish poems, their manuscript copies, published editions, and thematic content. The historical poems contained in the book of Knockninny are included in the database.

Paul Walsh, ‘The Maguires and Irish learning’, in Irish men of learning (Dublin: At the Sign of the Three Candles, 1947), pp 241-5, includes an English translation of the scribal preface which described the Maguire manuscript-making project.