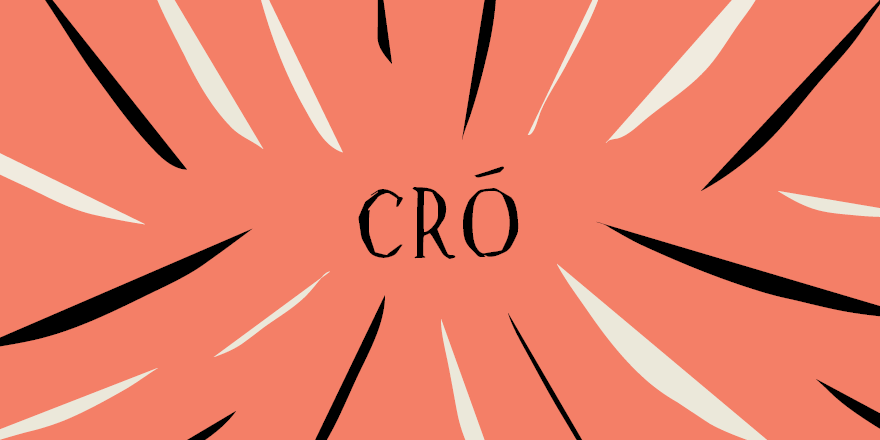 From the cutting room floor: A history of Ireland in 101 words

Celebrating the reprint of our book with some bonus words. No. 101: cró: through the eye of a needle

Certain entries were written for our recently published A history of Ireland in 100 words but for one reason or another were not used in the final version of the book. Here, the authors return to cró, a bonus ‘101st word’, which has been variously used over the years to refer to an animal-pen, a huddle of people and the eye of a needle.

Housing a pet today almost always involves some kind of cró, be it a dog-kennel (cró madra) or a rabbit-hutch (cró coinín). This sense of an enclosure for animals is the earliest attested meaning of the word, though the animals in question in medieval references are generally farmyard creatures – early Irish farmers kept their sheep in a pen (cró caorach) and their pigs in a sty (cró muice).

Just as it describes an enclosure for animals, so too cró can be used to designate a cell or prison in which a captive person might be held. According to one Middle Irish poem, being cast into a narrow cró was a just punishment meted out to the sorceress, Carman, after she had destroyed the produce of Ireland with magic spells. Perhaps with the idea of protection as much as confinement, the term was applied also to territories. Ulster is identified as cró Uladh, and Ireland itself is sometimes known as cró Cuinn ‘Conn’s fold’, an allusion to Conn of the Hundred Battles, legendary ancestor of the Uí Néill.

People too can form a cró. The phrase cró comairli ‘advisory huddle’ appears in the story ‘The First Battle of Moytirra’ to describe how the Fir Bolg gathered round to discuss their next move against the Tuatha Dé Danann. In the tale of the Bórama (‘Tribute’), when the men of the Northern Uí Néill form a protective circle around the king of Ireland before whisking him away to safety, they are said to have made cró sleg ocus scíath (‘an enclosure of spears and shields’). Bristling with spears and providing shelter with their shields, this must have resembled the famous Roman military tortoise formation.

Cró, then, can be applied to anything which encloses or encircles, and as such it was ideally placed to provide a term for various objects and features created by metalworking. In the medieval period, the word was clearly used to refer to the socket or loop of a spear, but it is in connection with the phrase cró snáthaide ‘the eye of a needle’ that Irish has produced some truly memorable images. During Cú Chulainn’s riastrad or ‘warp spasm’, one of his eyes grows as large as the rim of a wooden bowl while the other closes up so tightly that it is no bigger than cró snáthaiti. Speakers of Modern Irish, meanwhile, can indicate that someone is particularly skinny by saying rachadh sé trí chró snáthaide ‘he would go through the eye of a needle’!