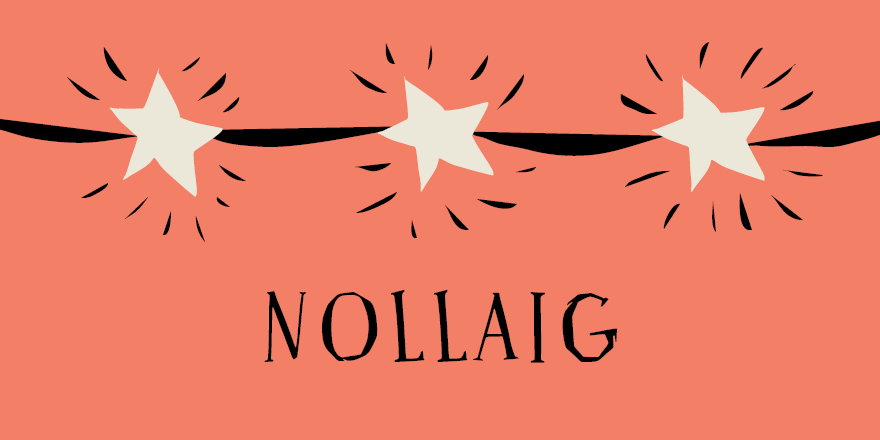 A history of Ireland in 100 words: Christmas special

Wishing you all a happy Christmas with one last bonus word: 'Nollaig'.

When the Christmas lights were turned on in Dublin city centre this year, there were calls for the sign which announced ‘Welcome to Grafton Quarter’ to be removed and replaced by ‘Nollaig Shona Duit’ which had hung at the entrance to Grafton Street in previous years. The Irish-language sign conveys the message ‘Happy Christmas To You’, Nollaig being the modern form of early Notlaic, a word which was itself derived from Latin natalicia meaning ‘birth’.

Today, Christmas Day is known in Irish as Lá Nollag, literally ‘the day of Christmas’, or as Lá Nollag Mór ‘the day of Great Christmas’. In medieval times, Notlaic Mór sufficed for this day of celebration, while Notlaic Becc ‘Little Christmas’ referred initially to the Feast of the Epiphany on the 6th of January. These parallel phrases (Notlaic Mór and Notlaic Becc) provided the early language with a neat way of expressing the period between late December and early January. The Annals of Ulster, for example, record that in the year 1234 there was a heavy fall of snow eter dá notlaic ‘between the two Christmases’.

Nollaig Bheag, in its modern spelling, is now associated with New Year in the north and west of Ireland. In southern parts of the country, it remains a term for Epiphany, but the 6th of January is known also as Nollaig na mBan ‘Women’s Christmas’. This was traditionally an occasion for women to take time for themselves as the busy Christmas festivities came to an end. Recently, however, various events focussing on equality and the visibility of women have been organised around this day, including Illuminate Herstory, an annual global light festival which projects onto castles, museums, theatres and libraries images of women who have made their mark on Ireland.

As well as appearing in terms for particular days over the Christmas period, Nollaig occurs also in the name of the month of December. In Modern Irish ‘December’ is Mí na Nollag ‘the month of Christmas’, but this name is not usual in Scottish Gaelic nor was it used in medieval Irish. In Scottish Gaelic, ‘December’ is an Dùbhlachd, a word used also as a common noun to denote dark, wintry weather and perhaps based on the adjective dubh ‘dark; black’. What seems to be the same word, used in a similar sense, turns up as dubhlocht in Irish sources as early as the fifteenth century, but this is rare and there is no reason to think that it ever served as a month-name. Instead, early Irish made use of the Latin loan-word Deicimber and the expression mí marbdatad ‘the month of dormancy’ may have referred also to this time of year.

Terms such as dubhlocht and mí marbdatad preserve for us, then, something of the intense darkness and dormancy that must have prevailed over Ireland in the depths of winter before the arrival of electric light. Nollaig, on the other hand, is often associated today with illumination and lights – and, most recently, with a contention over lights!

Happy Christmas from the Academy and the authors and illustrator of A history of Ireland in 100 words!