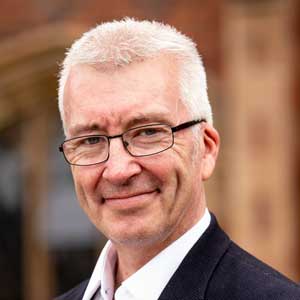 Peter Robertson is Professor of Energy and Environmental Engineering at Queen’s University Belfast. His particular expertise is in the area of photocatalytic technology for both energy and water sustainability. This work has encompassed basic research on photocatalysis through to pilot processes development for water treatment and for solar energy conversion and storage. Prior to joining QUB in 2015 Peter spent nearly 20 years at Robert Gordon University in Aberdeen initially as a lecturer then as Chair of Energy and Environmental Engineering and ultimately as Vice-Principal and Pro Vice-Chancellor (Research and Academic Support Services). Peter is a member of the Engineering and Physical Sciences Research Council (EPSRC) Strategic Advisory Network and the SUPERGEN High Level Group. He ws a member of as well as EPSRC’s Scientific Advisory Committee on Energy between 2018 and 2022. Peter was also a member of sub Panel 8, Chemistry for REF2021 He is a member of the editorial boards of Journal of Physics Energy and Photochem and is also an Invited Editor of The Handbook of Environmental Chemistry Series Published by Springer Verlag, specifically co-editor of Volumes II and III on Environmental Photochemistry.