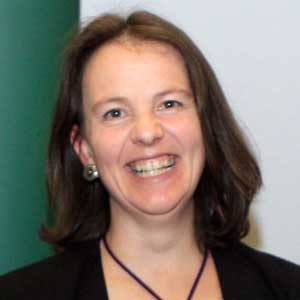 Professor Sylvia Draper graduated in Chemistry from the University of Exeter (1:1) in 1988. She received her Ph.D. from the University of Cambridge in 1991, working with Dr. C. Housecroft on 'Boron Butterfly Clusters'. Since 1993, after a short PD fellowship with Professor D. Cardin, Sylvia has worked as a lecturer, fellow and now associate Professor in Inorganic and Synthetic Materials Chemistry in Trinity College Dublin.

Sylvia was the first Trinity recipient of both a Provost Teaching Award and a National Award for the Integration of Research Teaching and Learning (NAIRTL) in 2008. She is heavily engaged in student-led teaching and scholarship. She has held several senior management positions as Head of Discipline in Inorganic and Synthetic Materials from 2003-11 and as Head of the School of Chemistry from 2013-17. She is passionate about the public promotion of science (RTE 1 Pat Kenny, Sean O'Rourke, Newstalk) and continues to work closely with the Higher Education Authority and others on educational outreach.

A strong advocate for Trinity, Sylvia has been on a number of senior appointment, selection and review committees both internal and external to College. She is currently the Chair of the College Library and Information Policy Committee, a role which has involved her in furthering the strategic objectives of these academic support services, and enabling policy changes that promote library access and IT service security. She is an active researcher, a founding member of CRANN, sits of several College Boards including that of the Trinity Translational Medicine Institute and has been an advocate for action on gender, equality and diversity (e.g. through Athena Swan) throughout her career.