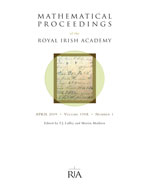 Mathematical papers have appeared in Royal Irish Academy journals since they were first published in 1787. Contributors have included many of the most important figures in Irish Mathematics, including Sir William Rowan Hamilton.

The editorial board includes members from all the major academic institutions in Ireland and international members of repute from Poland, Spain, the USA and Portugal