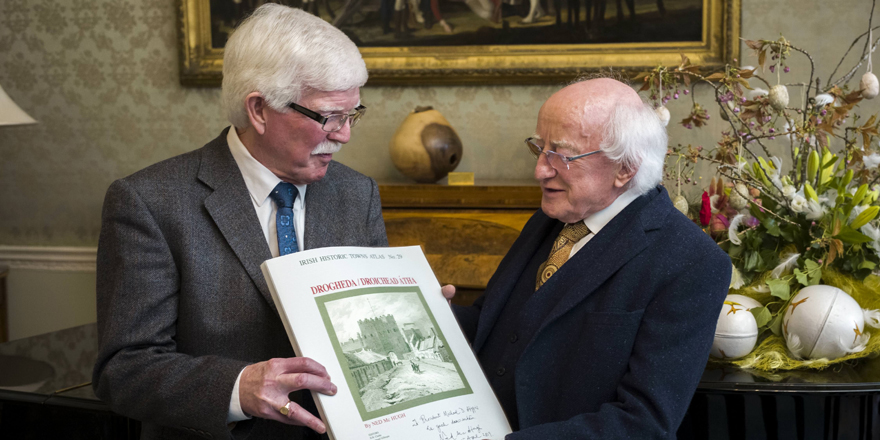 A delegation from the Royal Irish Academy, Highlanes Gallery and Louth County Council were invited for a courtesy call to Áras an Uachtaráin on 15 April 2019 where author Ned Mc Hugh presented President Higgins with an advance copy of Irish Historic Towns Atlas no. 29, Drogheda/Droichead Átha. 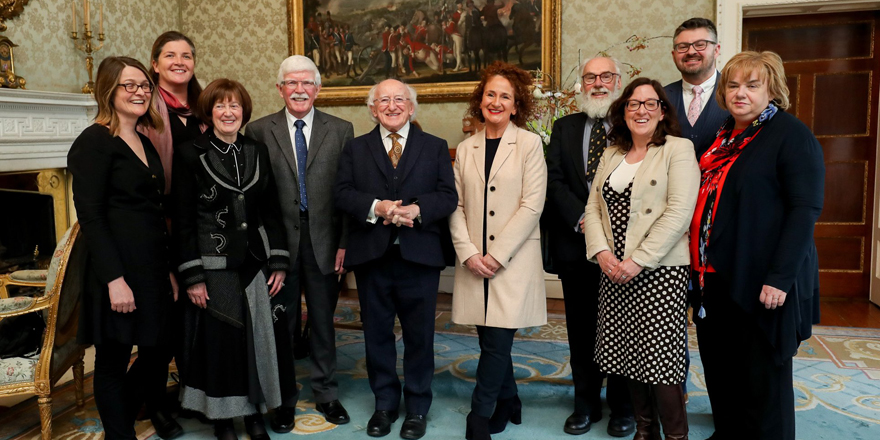 The presentation was followed by afternoon tea and a general discussion on the rich built heritage of Drogheda. President Higgins commented that ‘for heritage to arrive, history must come first’ and congratulated Ned and the IHTA team in the Royal Irish Academy for their contribution to this process.

The publication marks that culmination of many years work by Ned Mc Hugh and the team in the Irish Historic Towns Atlas project, which is based in the Royal Irish Academy, Dublin. The new atlas captures the development and history of Drogheda from its foundation in the late twelfth century through to the present day. It includes spectacular maps, paintings and views of Drogheda dating as far back as the 1580s as well as a detailed text and specially-produced thematic maps.

The prestigious Irish Historic Towns Atlas project is part of an international scheme and Drogheda will join over 530 other towns and cities that have been produced by the wider European project. The publication has also received generous local support from Louth County Council and the Highlanes Gallery, Drogheda. The maps are produced in association with Ordnance Survey Ireland.

The author Ned Mc Hugh is a retired teacher and native of Drogheda. He has published a variety of papers on the social and political history of the town.

Irish Historic Towns Atlas no. 29 Drogheda/Droichead Átha by Ned Mc Hugh, is published by the Royal Irish Academy and will be released in May 2019, price €35.