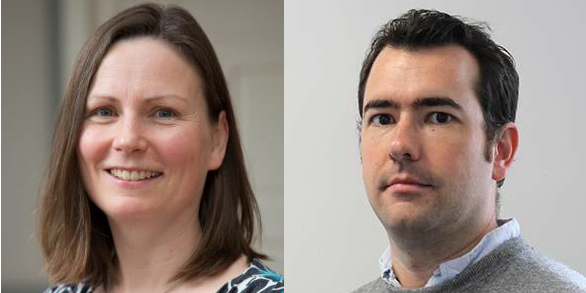 Ruth McManus and Jonathan Wright have been appointed to the Board of the Irish Historic Towns Atlas as honorary editors.

We are delighted to announce that both Ruth McManus (DCU) and Jonathan Wright (MU) have been appointed members of the Irish Historic Towns Atlas board of editors and will join Howard Clarke, Raymond Gillespie, Michael Potterton, and Anngret Simms, as consultant editor, on the board.

Ruth McManus is Associate Professor of Geography at the School of History and Geography, Dublin City University. Her research interests span various aspects of urban geography and suburban history and much of her work focuses on the physical and social development of everyday spaces. Her publications include Dublin 1910–1940, shaping the city and suburbs (2002, revised edition 2021), Crampton built (2008), and Leaders of the City (ed.) (2013). Building healthy homes, Dublin Corporation’s first housing schemes 1880–1920 (with Joe Brady) will be published this summer. She is currently working on the Drumcondra fascicle of the IHTA suburbs series.

Jonathan Wright studied for his PhD at Queen's University Belfast. He held an IRCHSS Postdoctoral Research Fellowship at Trinity College Dublin and was a research fellow at Queen's University Belfast, before joining the Department of History at Maynooth University in 2014. His research interests include Irish urban history (in particular the history of Belfast), Ireland and empire and Ireland and the Atlantic World in the age of revolution. Recent publications include An Ulster Slave-owner in the revolutionary Atlantic: the life and letters of John Black (2019); Ireland's imperial connections (edited with Daniel Roberts, 2019) and Crime and punishment in nineteenth-century Belfast: the story of John Linn (2020).