Latest Library Blog post. Grace Toland of the Irish Traditional Music Archive, introduces us to a wonderful project connecting artists with archival song, music and dance collections and the new art it has inspired.

In December 2020, the Irish Traditional Music Archive (ITMA) premiered a video online featuring renowned traditional Irish musicians Mary Bergin, tin whistle, and Tony Linnane, fiddle. The performers were playing melodies (tunes) which they had learned from the nineteenth-century William Forde Irish Music Collection held in the Library of the Royal Irish Academy (RIA). The William Forde video is part of an online ITMA series called Drawing from the Well which was launched by Minister Catherine Martin T.D. on 14 October 2020.

"Drawing from the Well connects artists with archival materials to inspire new art."

Since October 2020, despite the challenges of Covid-19, we have collaborated with seven full-time professional artists as they explored and responded to archival song, music and dance collections. The results are now freely available online. The inspired ‘new art’ has revealed itself as journeys of discovery and reflection, performance, and information sharing, captured in a variety of artistic and digital formats. In each piece and its accompanying blog, a door is opened to a wealth of resources within the traditional arts, and to the inspiring creativity and expertise of contemporary traditional artists.

Drawing from the Well is also a celebration of the enduring and evolving role of libraries and archives, such as the RIA Library and ITMA to inspire artists, and in turn to enrich the lives of citizens and audiences around the world.

In this blog we feature the first five episodes of the series which were released from October to December 2020. We hope you too will be inspired to continue to watch Drawing from the Well 2021 Series Two which is now live on the ITMA website.

Our journey began with Louise Mulcahy, an internationally renowned performer and tutor on both uilleann pipes and flute. From a rich family musical tradition in Abbeyfeale, West Limerick, she enjoys international success in performance and recording with her father Mick and sister Michelle, and as a solo artist. She presents and appears regularly on television and radio, and is also highly regarded as a researcher, most recently on the role of women in uilleann piping. 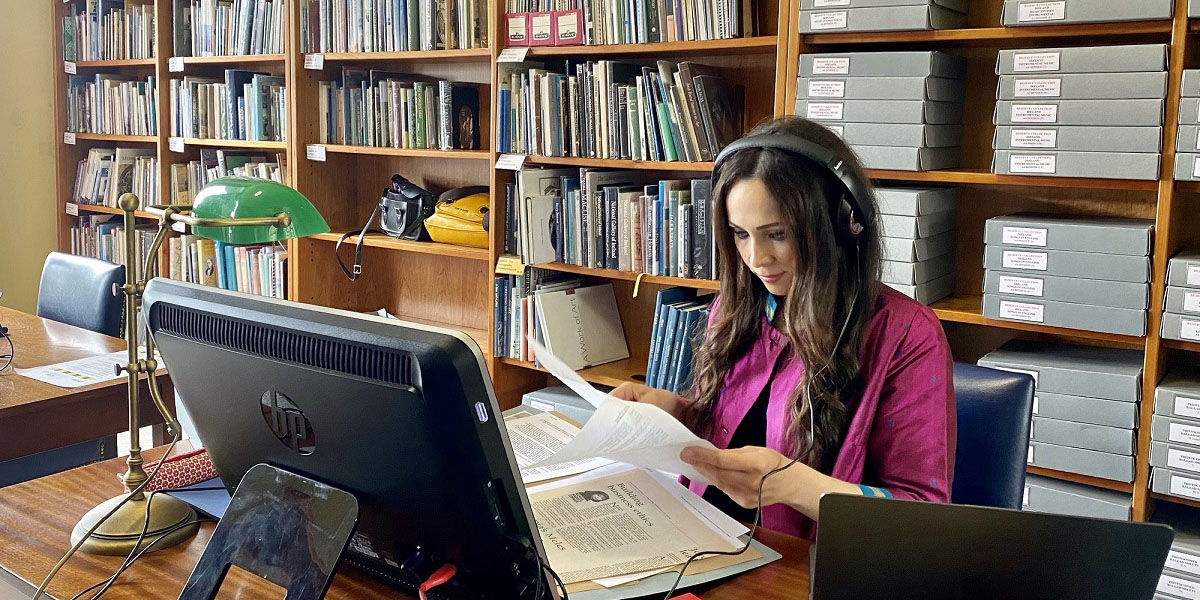 Following the death of the virtuoso uilleann piper Liam O’Flynn (1945–2018), Louise was made custodian by Na Píobairí Uilleann of his set of B uilleann pipes. ITMA was similarly honoured by Liam’s widow Jane Flynn in 2018, when she donated the musician’s personal musical archive into the care of ITMA. Episode one of Drawing from the Well is a warm and informative journey with Louise as she explores Liam’s archive, gaining a special and rare insight into the ideologies, key reflections, influences, music and life of one of Ireland’s most iconic pipers.

Martin Hayes
The Hidden Beauty in Our Archives

Martin Hayes is an internationally recognised and highly respected fiddle player, originally from Killanena in East Clare. Grounded in the musical tradition of his family home and growing up surrounded by a wealth of local music and dancing, Martin has forged a global musical career as a solo and ensemble player. From the Tulla Céilí Band to the Gloaming, Martin continues to explore the range of possibility that lies within traditional music. 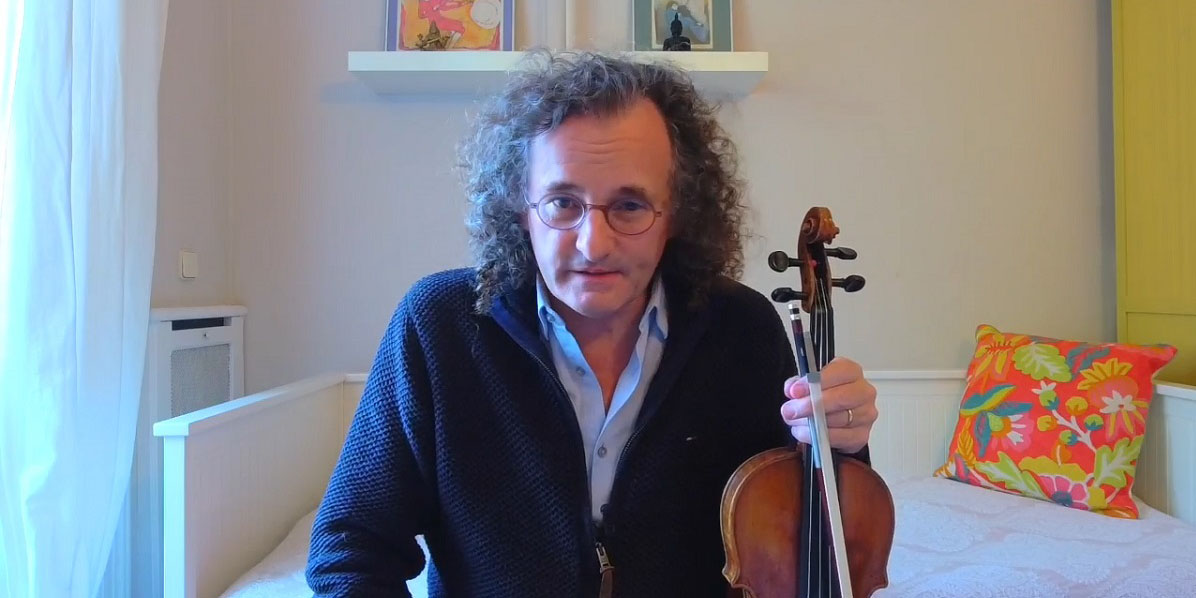 Martin Hayes, Live at Drawing from the Well http://www.martinhayes.com/

Drawing from the Well with Martin was organised as an online forum which began with a personally curated video reflectively documenting his thoughts on the value of archives, and the rich musical insight to be gained from listening and engaging thoughtfully with archival recordings. It was followed by a live discussion from an international audience and included live solo playing from Martin himself.

Please accept marketing and statistics cookies to view this content.
Drawing from the Well 2020. Episode 2. Martin Hayes: The Hidden Beauty in our Archives. Released 21 October 2020

Edwina Guckian is a dancer, choreographer, researcher, teacher and dance activist from Drumsna Co Leitrim. She is a full-time practitioner fully embedded in the cultural life of her community while successfully sharing her passion for dance internationally and online in performance, teaching and event organising. Edwina also manages her own independent film production company, Dreoilín Productions.

In Drawing from the Well with Edwina, one can witness the full breadth of her skills and enthusiasm for dance as she engages with a piece of research written by historian Seán Donnelly on the fate of an eighteenth-century Kildare dancer Jack Lattin.

"Jack Lattin dressed in satin, Broke his heart of dancing, He danced from Castle Browne To Morristown."

Her video traces the story and literal historical footsteps of the eighteenth-century dancer in a celebration of his life and fate. The journey ends with the performance of a newly choreographed dance from Edwina in honour of the infamous Jack Lattin.

Drawing from the Well Episode Four brings us to the Royal Irish Academy.

In the 1840s, William Forde (1797–1850), a professional musician born in Cork, made one of the largest collections of Irish traditional music in existence. The Forde Collection which is owned and in the care of the RIA, contains up to 1,900 melodies documented in 12 volumes of manuscripts and accompanying notebooks.

In a partnership with the RIA, ITMA plans to publish in 2021 a book containing over 900 tunes from RIA MS 24 O 19. This project is under the expert editorial guidance of Nicholas Carolan, Caitlín Uí Éigeartaigh and Jackie Small. The partnership will also see the future online publication of the digitised manuscript.

Access to and publication of such music resources is invaluable to the traditional music community. Within an oral tradition time and circumstances may break lines of transmission from one generation to the next. When collections such as Forde are made available in hardcopy and as interactive digital editions, the tunes can be learned and re-introduced to contemporary performance. 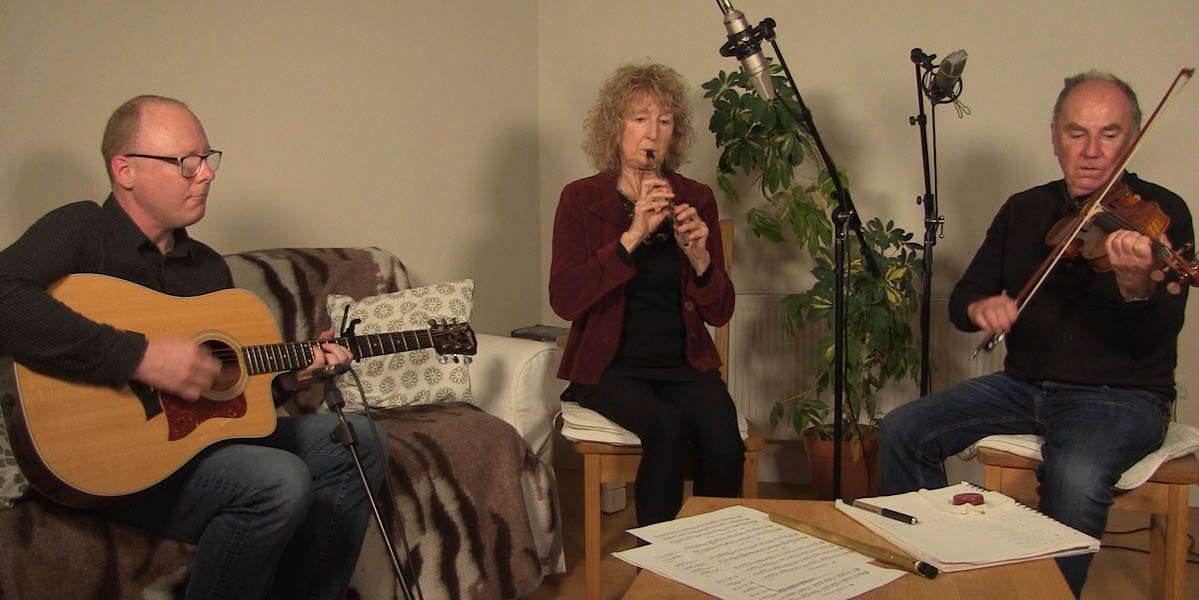 The Drawing from the Well video featuring whistle player Mary Bergin, fiddle player, Tony Linnane and John Blake, guitar, actively demonstrates this process. Tunes were selected from the nineteenth-century manuscript,  transcribed into musical notation, then learned and performed by the musicians. 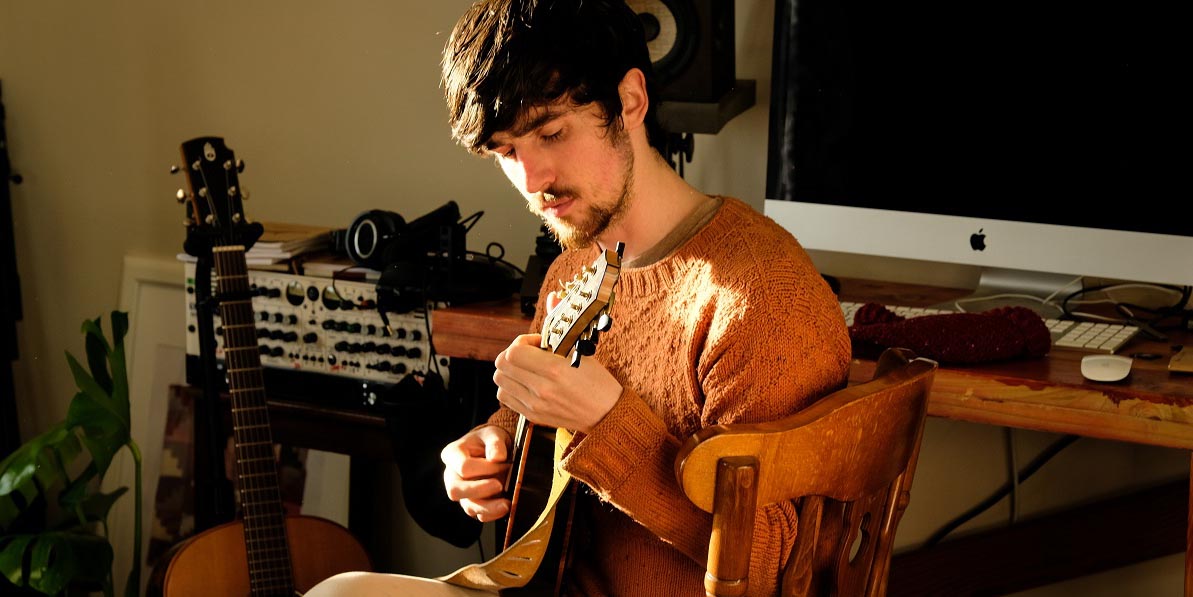 While he grew up in Carlow, Brían’s mother came from Arranmore Island, off the west coast of Co Donegal. This podcast is a warm and creative introduction to his family roots and to his ongoing research into the song tradition on the island.

Among his discoveries, Brían explores the field recordings of local singers made by collector Hugh Shields on the island in the 1970s, unearthing the voice of his grandfather whom he has never met. These recordings are archived in ITMA as part of the Shields Family Collection.

As mentioned, the second series of Drawing from the Well 2021 is now underway, with Dublin singer Radie Peat exploring ‘Songs of Murder, Lust and Incest’, and Kerry concertina player Cormac Begley introducing us to ‘An Trúmpa: the fall, rise and revival of the Jew’s harp’.

We look forward to your company at Drawing from the Well and welcome you to explore our other resources and activities at ITMA.

The Irish Traditional Music Archive (ITMA) is the national public archive and resource centre for Irish traditional music, song and dance, and the globally-recognised specialist advisory agency to advance appreciation, knowledge, and the practice of Irish traditional music. Established in 1987 it is funded by the Arts Council / An Chomhairle Ealaíon, and the Arts Council of Northern Ireland. ITMA’s collections are housed in 73 Merrion Square courtesy of the Office of Public Works.