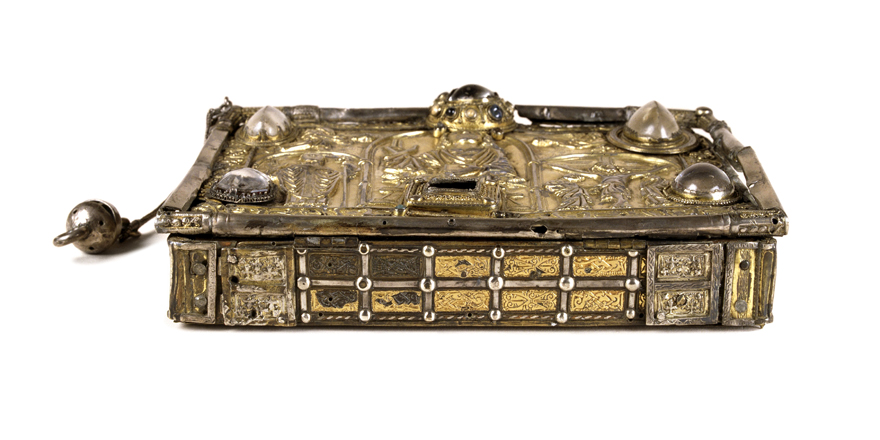 Latest Library Blog post. With launch of the new online exhibition we head back to 1813 and look at the circumstances surrounding the 're-discovery' of the sixth-century manuscript, the Cathach.

On the 30th of March the Library launched a brand-new online exhibition ‘The Cathach of Colm Cille: The story of an ancient Irish manuscript’. The exhibition illustrates how medieval manuscripts were made, explains how the Cathach was recorded in Irish manuscript sources and shows how it has survived as a relic from early Christian Ireland into modern times. There is also a map showing some of the best-known places associated with the book. This Blog post will skip past the first 1200 or so years of the manuscript and take a look at its history since its ‘re-discovery’ in 1813.

The history of the Cathach in the eighteenth and nineteenth centuries is vague. What we can be sure of is that in the latter part of 1813 the manuscript was in the curious hands of archivist and scholar, William Betham (1779-1853). At this time, the Cathach was inside a sealed shrine box (Cumdach) and belonged the O’Donel family. The Cathach had been in the keep of the O’Donnell’s since medieval times. The ‘Cumdach’ or shrine in which the Cathach lay for centuries, was made for Cathbarr O’Donnell in the 12th century. By the time the intrepid Betham got his hands on the shrine, it had not been opened for at least two hundred years. It was believed to contain relics of Colum Cille, possibly his bones, not a manuscript. As with many relics, the family believed ‘some superstitious terror existed with respect to opening the box’. Yet, despite these beliefs, Betham expected a manuscript to be contained within. Schrödinger’s Manuscript‽ According to Betham, Connell O’Donell, gave him express permission to open the shrine, and so he did. Here in his own words, published in 1827, on the opening of the shrine:

“The opening of Pandora's box did not give more evils egress, than a superstitious tradition had declared would be let loose on the heads of the devoted O'Donnells, whenever the contents of the portentous Caah [Cathach] should be developed — when the daring hands of antiquarian curiosity should venture to violate the repose of the holy reliques supposed to be therein contained. Regardless of the injunctions and threats of ignorance, which for more than a century had hermetically sealed it up, under an idea that it contained the bones of St. Colmkill himself, and notwithstanding these frightful forebodings, the box was opened and examined in the presence of Sir Capel Molyneux, Mr. O'Donell, and myself, without any extraordinary, or supernatural occurrence, except, indeed, a heavy shower of hail which a strong northwest wind drove against the windows of my study.” Betham Irish antiquarian researches, pp.109-10 (Dublin, 1827).

Side view of the Cathach book shrine. © NMI

Despite Betham’s dismissal of ignorant superstitions, I can’t help but feel he was a little relieved only a shower of hail fell from the sky that day. Incidentally, as I wrote this sentence a sudden shower of hail hit my window!

We know the date of this historic unsealing from a Bill of Complaint filed the following year against Betham at the Chancery at Dublin, dated 30 April, 1814. Lady Mary O’Donel charged that Betham had ‘secretly without her consent, opened the Cathach and interfered with its contents’ – Fourth Report of the Royal Commission on Historical Manuscripts, part 1, p. 586 (London, 1874). In his 1827 publication Irish antiquarian researches, as we have seen above, Betham was at pains to point out he had express permission from a member of the O’Donel family to open the shrine. This is inconsistent with his sworn statement as defendant in the charge against him in 1814. His 1814 statement gives an interesting account, in his own words, of the circumstances of his opening the shrine. It is too long to include in this post, it can be found online, if you care to read more Fourth Report of the Royal Commission on Historical manuscripts. Part 1, p. 586 (London, 1874). The outcome of the case was printed in the Freeman’s Journal, 28 November,1815:

This, action which had excited so much public interest came off to be tried during the Sittings after the last Term, and after the Jury had been called, a proposal was made on the part of Sir W. Betham to make an ample apology to Lady O'Donel, for his conduct, and to pay her Ladyship's costs.— The Counsel of Lady O'Donel, aware of her sentiments, and that pecuniary damages were not her object, acceded to the proposal, and dictated the following apology, which was signed by Sir William Betham:-

"Sir William Betham most respectfully presents his compliments to Lady O'Donel, and begs to assure her, that he sincerely laments his having indiscreetly opened the sacred and ancient Relic of the O'Donel family committed by her to his care. Sir William assures her Ladyship that such, his conduct, was occasioned by an anxious curiosity to explore the contents of so ancient a relic, and not at all from the slightest intention of violating its sanctity, or wounding her Ladyship's feelings. For such, his conduct, Sir William expresses his most unfeigned contrition, and places this apology in the hands of Lady O'Donel, to be used in such way as her Ladyship should think proper.

The above apology should have been published immediately after it was signed, but Sir William Betham having refused until lately to pay Lady O'Donel's costs, which, on taxation, amounted to £264. 8s. 4d., it was apprehended it might become necessary for her Ladyship to bring this cause again before the original tribunal, a Jury of the Country. Sir William having, in the present Term completed his engagement, by paying her Ladyship's costs, has put an end to further legal discussion on the subject.” 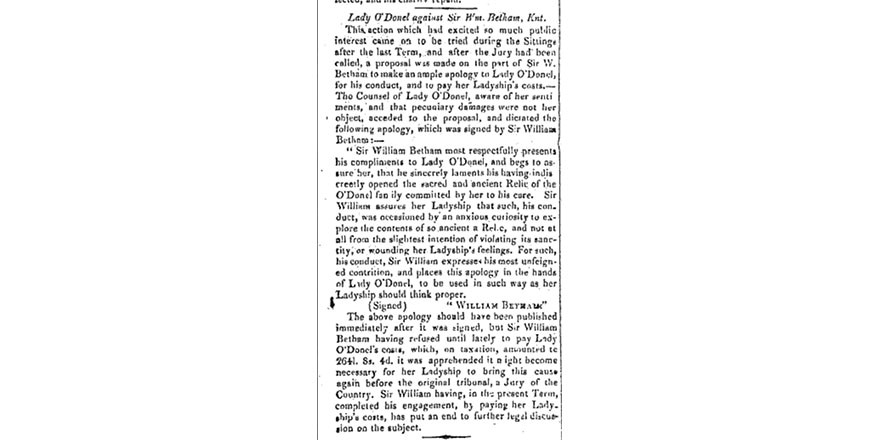 Conservators and archivists look away now …

In his statement, Betham describes how he determined the shrine contained a manuscript, before he took the drastic steps of opening up the box. He used a thin piece of wire, inserted it into a small gap through the metal box and by rubbing the wire against the contents within felt what could possibly be vellum. Later, on opening, he found the vellum leaves caked together inside a decayed wooden box. He also retrieved what was most probably binding - a thin piece of board covered with red leather. Nothing more is known of the wooden box or binding as Betham obviously didn’t think them worthwhile to keep or describe further. He described how he separated the leaves:

“It was so much injured by damp as to appear almost a solid mass. By steeping it in cold water I was enabled to separate the membranes from each other, and by pressing each separately between blotting-paper, and frequently renewing the operation, at length succeeded in restoring what was not actually decayed to a legible state.” (Irish antiquarian researches)

In Lawlor’s detailed paper on the Cathach in Proceedings of the Royal Irish Academy, Vol. 33 (1916/7), he is often critical of Betham and his crude recovery operations. Lawlor believed it possible that a considerable number of leaves weren’t considered worthy of preservation due to their condition. It is not clear from Betham’s own writing if this is the case or not. The Cathach as it survives consists of fifty-eight consecutive leaves, containing Psalms 30:10 to 100:13. The manuscript originally would have run to 110 leaves. Some leaves are more mutilated than others, the worse for wear are the leaves at the beginning. 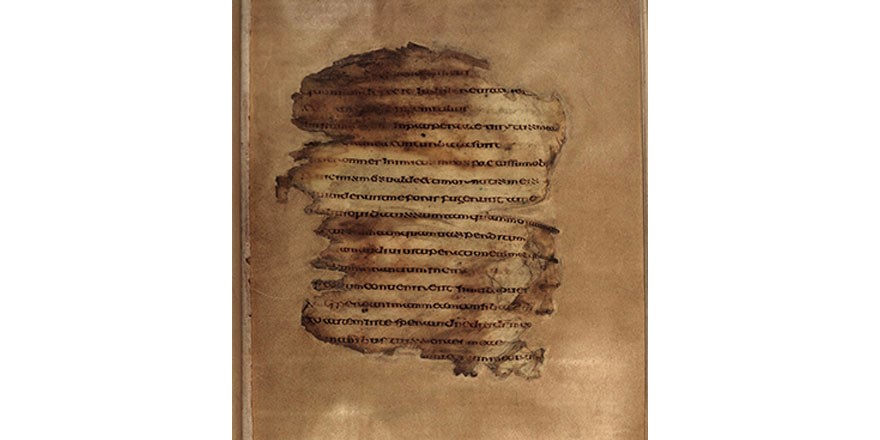 The Manuscript and shrine were handed over to the Royal Dublin Society by Sir Richard O’Donel in April,1842. It was subsequently transferred to the Royal Irish Academy at the end of May 1843. In his letter to the Academy on this transfer, Richard O’Donel gives instructions on where it is to be displayed and kept. The letter was published in the Proceedings of the Royal Irish Academy, 1843:

SIR WM. R. HAMILTON, LL.D., President, in the Chair.
Sir William Betham read the following letter from Sir Richard O'Donel, Bart.:
"April 24th, 1843. "MY DEAR SIR WILLIAM, " I have to apologise for all the trouble I have given you about the Caah, but several circumstances have come to my knowledge within the last few days, which induce me to desire that it should be placed in the Royal Irish Academy, next to the Cross of Cong; but I would not take any step in the matter without first consulting you, and having done so, I write you this note to request you will be so good as to make known my wishes to the Dublin Society upon the subject, and to have it removed to the Royal Irish Academy, upon their taking charge of it as my property, placing it during the day beside the Cross of Cong, and having it each night placed in a fire proof box. " I again beg leave of you to pardon me for all this trouble, and to accept my thanks for your kindness at all times, and believe me,
"Dear Sir William,
"Very sincerely yours,
Richard O'Donel. 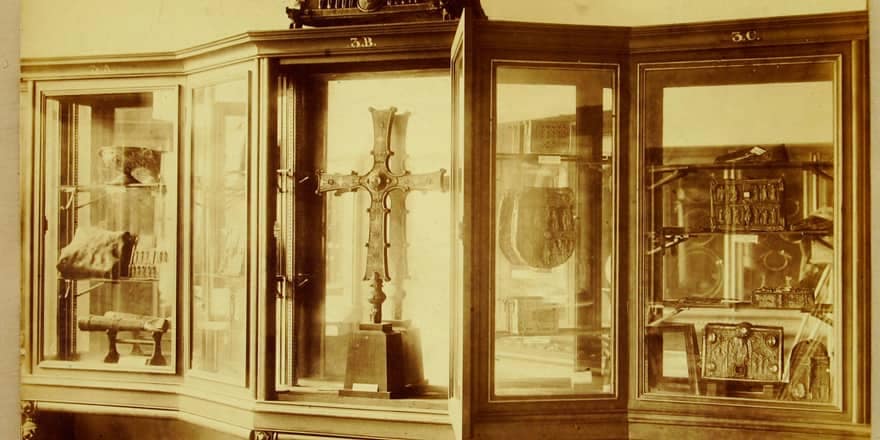 In the 1930s, the book shrine was transferred to the National Museum of Ireland, along with the other RIA artefacts. The manuscript was retained by the Academy and continues to be a part of the Library’s important medieval and early modern Irish manuscript collection. In 1920, the Cathach was sent to the British Museum Bindery for conservation work. Here, the leaves of the manuscript were separated and mounted in paper frames and the butt joints were overlaid with white net. By the 1960s the paper mounts were cockling and the manuscript could not be closed properly. 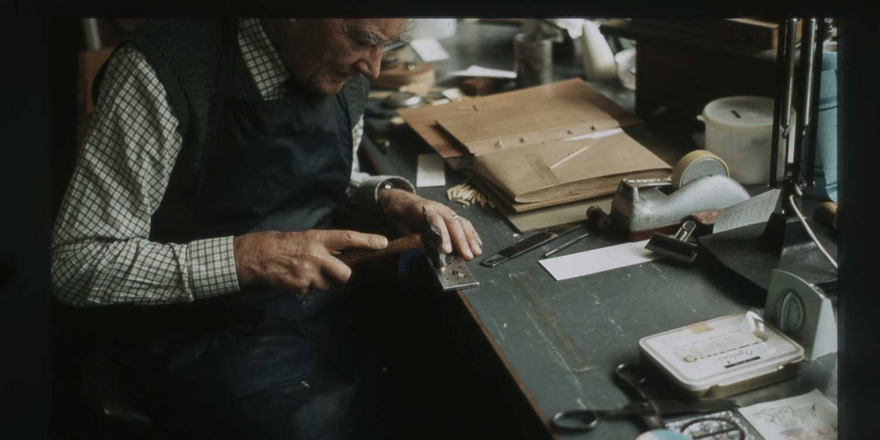 In 1980 more elaborate repair and rebinding work was carried out by Roger Powell and his assistant, Dorothy Cumpstey, at a cost of Stg£6,150 for the repair and Stg£250 for the case. The paper mounting, from which the vellum leaves had come adrift, was replaced by new vellum mounts specially stained to match the colour of the original leaves. Pieces of degreased fish skin were used for joining butted edges in the vellum mounts. The leaves, assembled in sections, were sewn within a zigzag of hand-made paper onto cords and bound in English oak boards. The spine was covered in white alum-tawed pigskin. To keep the vellum under pressure and to prevent cockling, the rebound manuscript was put into a special box designed by David Powell and made by George Taylor in Edward Barnsley's workshop. 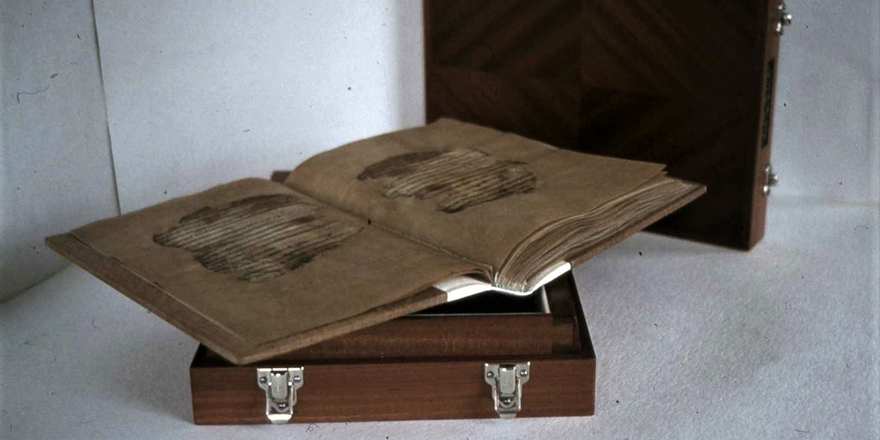 The Cathach is one of the many treasures of the Academy Library’s collection. This year, to celebrate the 1500th anniversary of the birth of Colum Cille, we are pleased to be able to curate an exhibition on the history of the manuscript. The new exhibition ‘The Cathach of Colm Cille: The story of an ancient Irish manuscript’ will be available to view online from 30 March.

Note: The variant English spellings of the surname O’Donnell/O’Donel/O’Donnel were used by different parts of the family. The spellings appear in their various forms in various publications, I have included the names as they appear in the sources consulted.