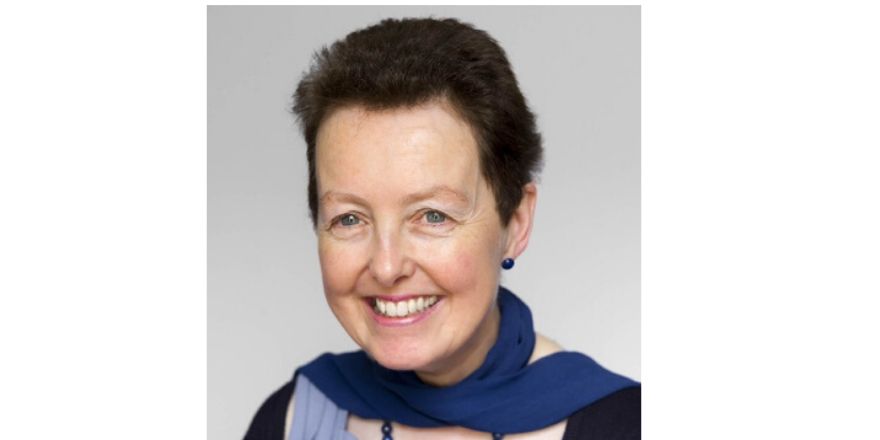 Best wishes to Academy Librarian Siobhán Fitzpatrick on her retirement.

A fond farewell to our esteemed colleague, Siobhán Fitzpatrick, we wish her a long and happy retirement.

Siobhán Fitzpatrick, who has just retired as Academy Librarian, has been a familiar face in the Library of the Royal Irish Academy since the 1980s. She is well known not just to Academy Members but to generations of researchers in the area of Irish studies, from postgraduate students to senior scholars, all of whom benefited from her courteous accessibility and her unrivalled knowledge of the Academy collections. A decade ago, her professionalism was recognised on a wider stage when she was elected President of the Library Association of Ireland, serving a two-year term.

Reader service is at the heart of the work of the Academy Library, but so is the professional curation of the Academy’s priceless treasures. In this, Siobhán has proved enormously successful, not least in identifying potential sources of external funding to implement key projects. She raised significant funds from a wide range of benefactors that has been used for the conservation and rebinding of medieval Irish manuscripts, the online cataloguing of more than 35,000 ‘Haliday’ pamphlets, the professional listing of a range of modern archival collections, and for a variety of digitisation projects. These special projects have proceeded alongside the mammoth task of developing online catalogues of the library’s collections, replacing older in-house catalogues. These various initiatives have helped preserve some of Ireland’s most important treasures for future generations, while allowing highlights from the Academy’s collections to be made accessible online.

Collaboration with staff in other libraries, research institutes and cultural institutions has been central to the work of the Academy Library under Siobhán’s direction. A key achievement has been the online publication of almost 100 of the Academy’s medieval and early modern Irish manuscript treasures in partnership with the School of Celtic Studies, Dublin Institute for Advanced Studies, on the Irish Script on Screen project (directed by Pádraig Ó Macháin). This ongoing initiative has already transformed research on Ireland’s manuscript heritage.

Funding awarded by the Higher Education Authority's Programme for Research in Third Level Institutions (PRTLI) for a project in which Siobhán was principal investigator, facilitated the re-mastering of the Doegen collection of Irish language dialect recordings from the late 1920s. The recordings, together with associated documentation about the speakers, are now accessible online.

A rolling programme of library lunchtime lectures that began in 1999 continued until a matter of weeks ago, interrupted only by the pandemic-induced closures of spring 2020. Themed series of lectures, often accompanied by an exhibition of related material from the Academy collections, have been a hallmark of the Library’s outreach activities during Siobhán’s time in charge.

Another target was reached early in 2009 with the publication of Treasures of the Royal Irish Academy Library (Dublin, 2009), an overview of the Library collections written by a range of specialists and edited by Siobhán Fitzpatrick along with colleagues Bernadette Cunningham and Petra Schnabel.

Since 2009, too, Irish History Online, the national bibliography for Irish history, has been based in the Royal Irish Academy Library, an initiative welcomed and supported by Siobhán Fitzpatrick.

In recent years, a series of international conferences, each bringing together panels of experts for in-depth discussion of one particular medieval Irish manuscript, has been held in partnership with Maynooth University and the Dublin Institute for Advanced Studies. The proceedings of the first two, on Lebor na hUidre and on the Book of Ballymote (edited by Ruairí Ó hUiginn, MRIA) have been published by the Academy, and further publications in the series are in preparation.

Siobhán was appointed Academy Librarian on Bloomsday, 16 June 1997. There was no fuss on her arrival, since she had been Acting Librarian during the preceding five years, and a member of library staff for a decade before that. Circumstances in spring 2020 have conspired to ensure that as yet there has been none of the ritual that should be associated with the retirement of a long-serving senior staff member. All at the Academy would like to wish Siobhán a long and happy retirement, and to thank her for her tremendous contribution in leading the Academy Library into the twenty-first century with such resourcefulness and vision.