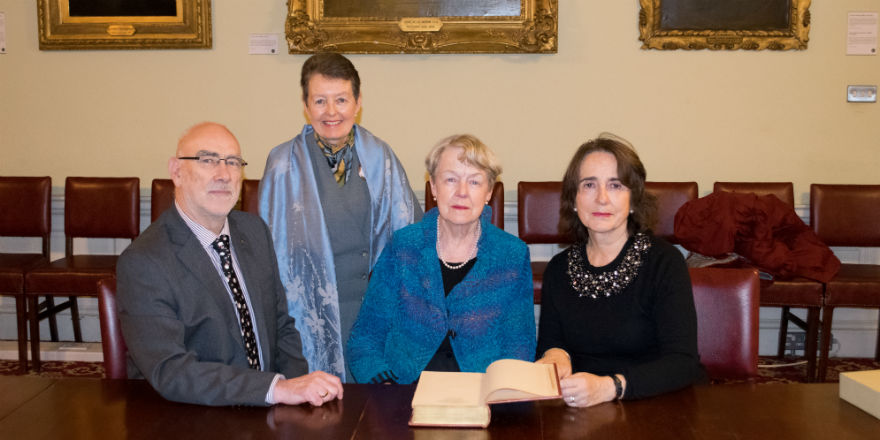 On 3 December the family of Professor Kevin Carroll, MRIA (1926-2016) presented the Academy with his signed first-edition copy of Finnegans Wake. We are delighted to receive this new addition to the Library's collections and are very grateful to the Carroll family.

Peter Kevin Carroll, MRIA (1926-2016) was Professor of Optical Physics at University College Dublin 1978 until his retirement in 1990. Professor Carroll was elected to Royal Irish Academy membership in 1960, served on the Academy Council for several periods and was Vice-President (1983-86 and 1994-98). A specialist in spectroscopical analysis, he was acknowledged as a foremost authority internationally in the area of molecular spectroscopy and was awarded the Royal Dublin Society’s Boyle Medal in 1988 for his work on molecular nitrogen and in recognition of his work in atomic and molecular spectroscopy. An accomplished pianist and director of the Culwicke Choral Society, Kevin was also well versed in literature.

In 1964 physicist Murray Gell-Mann predicted the existence of tiny atomic particles which he named quarks; in 1969 he was awarded the Nobel Prize in Physics for his discovery of quarks — ‘for his contributions and discoveries concerning the classification of elementary particles and their interactions". Gell-Mann instinctively named his particles quarks based on a sound which resonated with him, only proposing a spelling afterwards!

A tale of two physicists:

‘Three quarks for Muster Mark!
Sure he hasn’t got much of a bark
And sure any he has it’s all beside the mark.’

In October 2002, Gell-Mann came to Dublin to deliver a lecture for the Academy on the occasion of Hamilton Day, 16 October, commemorating the eureka moment on 16 October 1843, when one of Ireland’s foremost scientists Sir William Rowan Hamilton, discovered the algebraic equation which enabled the multiplication law for his quaternion theory. Gell-Mann’s lecture was titled: ‘On Hamilton, bridges and contemporary science’. On that day too, Gell-Mann presented Kevin Carroll with a signed first-edition copy of Finnegans wake (London & New York: Faber & Faber, Viking Press). In recognition of their ‘quark’ connection, he dedicated the copy to his friend thus: 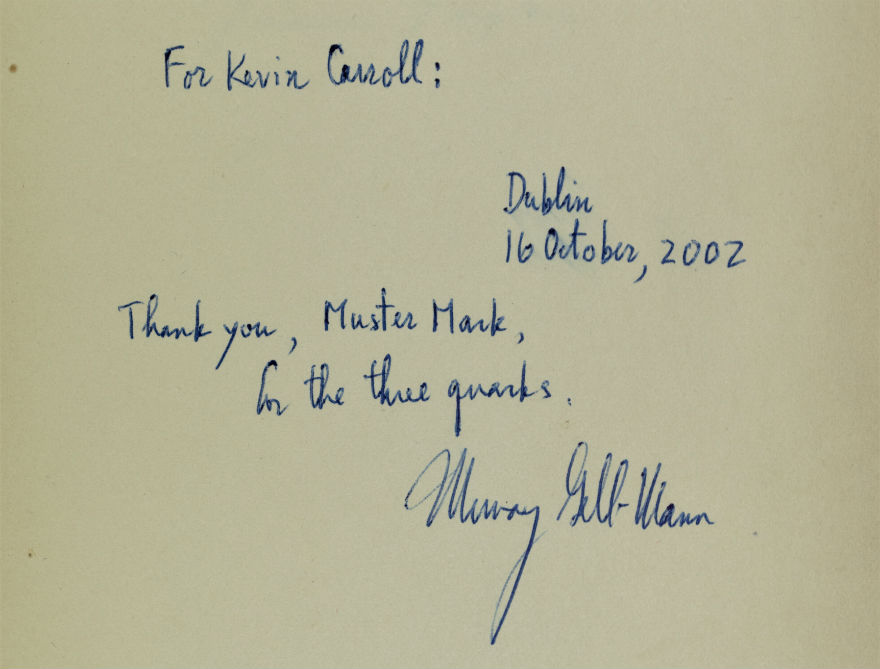