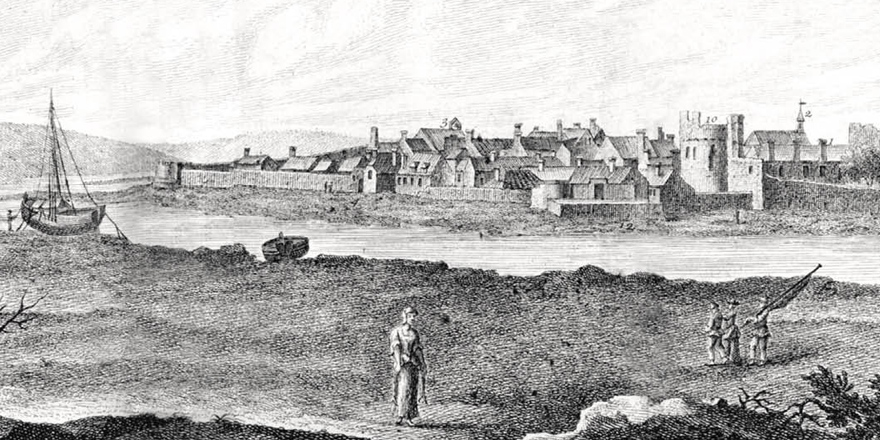 Bringing ‘Heritage to your doorstep’ the latest atlas from the Irish Historic Towns Atlas on Dungarvan released digitally on 18 August 2020 in a first for the project.

This new digital atlas is an interactive map that allows users to explore the urban heritage of the town of Dungarvan. The Digital Atlas of Dungarvan is based on research and cartography carried out for the forthcoming Royal Irish Academy publication — Irish Historic Towns Atlas (IHTA), no. 30, Dungarvan/Dún Garbhán by John Martin (due October 2020). The Digital Atlas has been created by the IHTA team using ArcGIS Online and is available here. 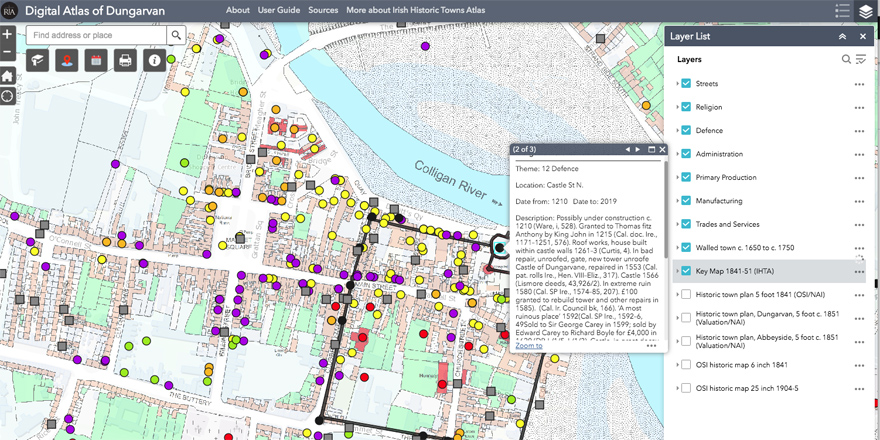 Dungarvan has a fascinating built heritage. Well known to locals and visitors are the fine Anglo-Norman castle and Augustinian abbey in Abbeyside, but there is also the invisible heritage, which will be revealed by the new digital atlas — the walls that defended Dungarvan in medieval and early modern times now lying beneath the surface and the former street layout replaced in the early nineteenth-century by Grattan Square.

Freely available and accessible online, the Digital Atlas of Dungarvan provides layers of historic Ordnance Survey maps that show how the town has changed over time. A specially digitised base map shows the town in 1841, where detailed historical information on c. 650 individual sites has been incorporated. This will be an invaluable tool for heritage hunters, locals and school classrooms alike. Included also is a Story Map that shows the user how to investigate and enjoy the Digital Atlas of Dungarvan.

“As Mayor of Waterford I’m delighted to see the release of the Digital Atlas of Dungarvan as part of Heritage Week but being a native of the town itself it gives me even greater pleasure to see this project come to fruition. I wish to commend its author John Martin, and all who worked on this project with the Royal Irish Academy, and I know it has taken 10 years of painstaking research by John —  it will be wonderful to now have a high-quality interactive map covering 650 sites, streets and lanes of the great town that is Dungarvan. I have no doubt but it will serve as an extremely-useful tool in education and research, and will assist those seeking to learn more about their own heritage as well as visitors to Dungarvan.”

“As we look to preparing a new Development Plan for Waterford City and County in 2020 the launch of the Historic Towns Atlas for Dungarvan reminds us of the importance of understanding the evolution of a townscape and the influences of land management and human input to the social and economic fabric of an urban area. Thanks to the RIA and the wonderful research and dedication of John Martin we now have a rich compendium on Dungarvan that will provide a fantastic learning resource for anyone interested in local history, urban development and our built and cultural heritage.”

The Digital Atlas of Dungarvan can be accessed from 18 August 2020 at www.ria.ie/digital-atlas-dungarvan

Irish Historic Towns Atlas, no. 30 Dungarvan/Dún Garbhán by John Martin will be published by the Royal Irish Academy in October 2020. 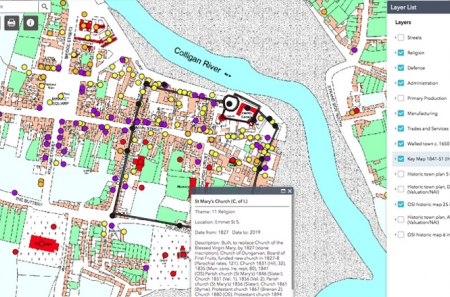 Digital Atlas of Dungarvan interview with Sarah Gearty on WLRFM

Sarah Gearty is interviewed by Damien Tiernan from WLRFM on the recent launch of the Digital Atlas of Dungarvan, which is part of the Irish Historic Towns Atlas series. 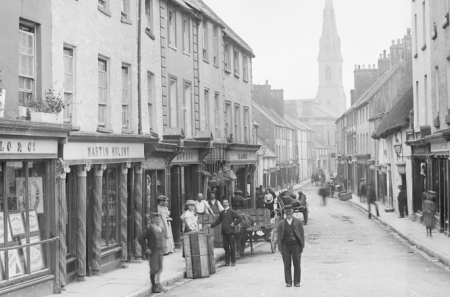 As part of Culture Night 2020 we have an exhibition that offers a glimpse of town life through the Irish Historic Towns Atlas.