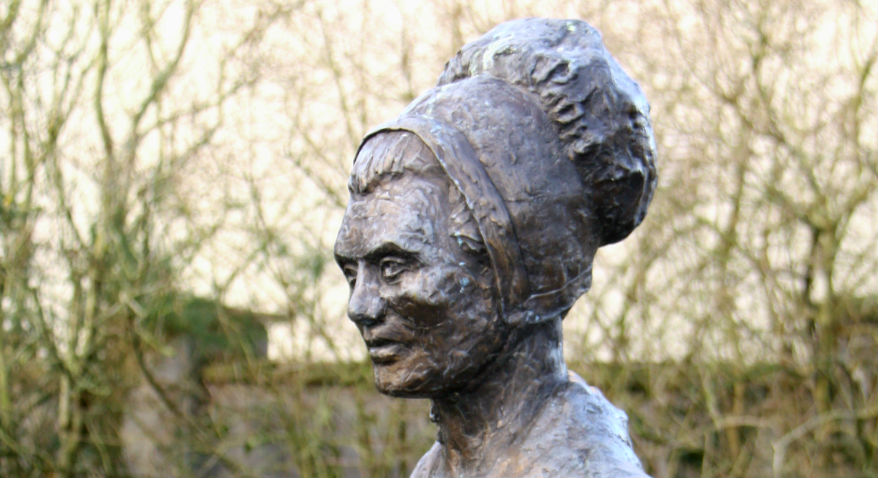 Professor Mary O'Dowd, MRIA, will today deliver a lecture 'The Shackleton sisters: Irish Quaker women c. 1750-1850' the fifth and final event in the current lunchtime series, 'Sisters', celebrating the lives and achievements of five families of sisters who have made their mark on Irish life.

To accompany the lecture here is the Dictionary of Irish Biography’s entry on one of those sisters, Mary Leadbeater (née Shackleton) (1758–1826) by Maureen E. Mulvihill.

Mary Leadbeater (née Shackleton) (1758–1826), author, poet, and memoirist, was born 1 December 1758 at Ballitore (‘Ballintore’), Co. Kildare, the second child of the three daughters and one son of Richard Shackleton (1726–1792) and his second wife Elizabeth Carleton (1726–1766). On her paternal line, Mary Leadbeater was a relative of the distinguished explorer, Sir Ernest Shackleton. Her branch of the Shackletons, originally from Harden in Yorkshire, England, were ardent members of the Religious Society of Friends. Mary's parents relocated to Ireland as tutors, and with their kin and neighbours they eventually established Ballitore as the only planned and permanent quaker settlement in eighteenth-century Ireland. Ballitore was then a unique, self-sufficient stronghold, complete with its own boarding school, post office, religious meeting house, farms and cemetery. The quakers’ strong work ethic and high regard for education made them an upwardly mobile presence.

Reportedly literate by the age of four, Mary was educated in the classical curriculum at the famous (non-denominational) Ballitore boarding school, which had been founded in 1727 by her grandfather, Abraham Shackleton; this venerable two-storey structure had an original enrolment of thirty-eight pupils, at a fee of £6 per term. Leadbeater's father, Richard Shackleton was headmaster in 1756, by which time the school had grown in enrolment and reputation; its students travelled to Ballitore from England, France, Norway and Jamaica. Edmund Burke had been a pupil there. Mary's skills in writing, as well as in painting (especially watercolour), were demonstrated in early youth, and she swiftly revealed herself to be a versatile and indefatigable writer. Her love of learning was stimulated by Aldborough Wrightson, an elderly scholar in Ballitore, and also by frequent trips to the public library in Limerick, whose collection she would significantly expand. From the age of eleven, she maintained a personal diary (fifty-five extant volumes, NLI), in which she wrote almost daily over several decades. She also was skilled in herbal medicine, owing to the instruction of an aunt, the herbal healer of Ballitore. In the 1780s, Leadbeater herself assumed this role, in addition to directing a modest bonnet-making enterprise. Like most quakers, she was entrepreneurial and industrious.

At the age of twenty-six, her development as a writer was greatly accelerated owing to an extended visit to England in 1784 with her father, where she observed the primitive quakers at Selby in Yorkshire, a community whose membership, beliefs and activities she recorded in her journals. She also visited London, where those she met included Sir Joshua Reynolds, George Crabbe, the London publisher Joseph Johnson, the Edgeworths and Edmund Burke, a friend of the family. Burke would correspond with Mary for many years, even penning a sad farewell to her from his deathbed in 1797. Irish women writers in her circle included Maria Edgeworth and Melesina Chenevix Trench (the ‘Mrs R. Trench’ in Leadbeater's correspondence).

At the age of thirty-two, she married on 6 January 1791 William Leadbeater (1763–1827), a landowner, farmer, businessman, and quaker convert, originally of Huguenot extraction. The newlyweds settled in Ballitore, where their union was blessed with six children (some sources record three children: Lydia, Mary, and Margaret). One of their daughters, Lydia (later Mrs Lydia Fisher), perhaps inheriting her mother's literary disposition, was reportedly the secret patron of the poet and novelist Gerald Griffin.

In addition to her activities as village healer, bonnet-maker, and homemaker, Mary Leadbeater was a vigorous writer; her career as a public author, whose writings sold well on the Dublin, London and Philadelphia book markets, spanned thirty-four years (1794–1824). Her corpus of writings includes an impressive range of genres: classical translation, poetry, diary and journal, narrative sketch and tale, improvement literature, children's literature, historical chronicle and annals, letters, biography and autobiography. She published for the first time in 1794, albeit anonymously, Extracts and original anecdotes for the improvement of youth (Dublin: R. M. Jackson), which consisted of poems on secular and religious subjects. Perhaps the most remarkable verse in the collection is ‘The negro: addressed to Edmund Burke’ (1798) for the light that it sheds on her evolving position on civil rights and Burke's influence on her egalitarian values. In 1808 her authorship of Extracts and original anecdotes was asserted unambiguously on the title-page of her second book, Poems by Mary Leadbeater (late Shackleton) to which is prefixed her translation of the thirteenth book of the Aeneid; with the Latin original, written in the fifteenth century by Maffaeus. (The Dublin edition was published by Martin Keene; the London edition, by Longman, Hurst, Rees and Orme.) Several of the poems in this collection are addressed to or are concerned with Edmund Burke; the majority of the verses engage with local subjects, and the purity and beauty of rural domestic life.

In 1811 she published in Dublin and London Cottage dialogues among the Irish peasantry (Dublin edition published by J. and J. Carrick). The London edition brought her £50 from its publisher Joseph Johnson, a supporter of women writers, and included a preface and notes written by Maria Edgeworth, which assisted in its favourable reception and sales. Didactic and educative, the Dialogues continued Leadbeater's commitment to Irish improvement discourse; her ideas were accessibly presented in dialogue (or conversation) form, which had been suggested to her by the Irish writer William Le Fanu (1774–1817), whom Leadbeater acknowledges in her Dialogues. This 1811 text tendered practical advice to the rural Irish on household management and family organisation; its engaging contrast of the wastrel housewife and the thrifty housewife promoted fundamental quaker values. Recipes for nourishing meals and information on the medicinal qualities of herbs are set out in easy chats between friends. The Dialogues saw a second series in 1813 (Dublin: John Cumming), this time directed at working men and intended to ‘perform the same service to the Men of the Cottage that was in the first Part designed for their consorts’; a further sequel was published as The landlord's friend (Dublin: John Cummings, 1813), and directed at the gentry. In 1814, she published Tales for cottagers ... the present condition of the Irish peasantry (Dublin: John Cumming), which Leadbeater wrote with Elizabeth Shackleton. Consisting of tales illustrating the virtues of perseverance, frugality and temperance, the volume also contains a play, Honesty is the best policy. In 1822, she concluded this series with Cottage biography, being a collection of lives of the Irish peasantry (Dublin: C. Bentham), being stories inspired by actual local cases.

Leadbeater's Memoirs and letters of Richard and Elizabeth Shackleton ... compiled by their daughter (London: Harvey & Darton) was published in 1822 (and later reissued in 1849, edited by Lydia Ann Barclay). This tribute of a loving daughter to loving parents demonstrates Mary Leadbeater's abiding commitment to family history. Her Biographical notices of members of the Society of Friends, who were resident in Ireland (London: Harvey & Darton, 1823) is a valuable record of early-nineteenth-century Irish quaker culture, focusing on membership, tenets and activities. Her last work, The pedlars: a tale, (Dublin: Bentham and Harvey, [1824 or 1826]), again employs the dialogue form to address the fairy lore and nonsensical tales of Irish popular culture, and the island's ‘curiosities’, both natural and manmade. This late text in her corpus was written for the Kildare Place Society.

It was Leadbeater's posthumous publications which secured her fame. In 1862, her ambitious Ballitore journals (1766–1824) were collected and edited by her niece, Elizabeth Shackleton, and published in two volumes by the Dublin quaker, Richard Davis Webb, as The Leadbeater papers. The Annals of Ballitore, with a memoir of the author (London: Bell & Daldy). Recording the cultural life and history of Ballitore from 1766 to 1823, Leadbeater's journals provide an early and complete social history of a particular Irish village. Two chapters are famously devoted to her description of the Irish rebellion of 1798, which she observed firsthand from one of the windows of her parents’ home, overlooking the village square. She supplies historians with a vivid day-by-day account of the general mayhem and atrocity of that event, marked by public executions and the destruction of her own village. Ballitore was occupied first by crown forces and then by Irish insurgents. The army took revenge on the inhabitants of Ballitore, who ministered impartially to the wounded on both sides of the fray, by destroying many homes and executing several residents. Leadbeater and her husband narrowly escaped death. She records in these journals her horror at what she had witnessed: ‘... we saw the youthful form of the murdered Richard Yeates ... his bosom all bloody. For many days after I thought my food tasted of blood, and at night I was frequently awakened by my feelings of horror ...’ (I:223). The second volume of her journals includes hitherto unpublished letters from Edmund Burke, as well as correspondence from Melesina Trench and George Crabbe. Surrounded by her immediate family, Leadbeater reportedly died a painful death, at the age of sixty-seven, at Ballitore, Co. Kildare, on 27 June 1826. She was interred in her village's quaker burial ground.

As a woman and especially as a quaker, Mary Leadbeater existed on the margins of early-modern Irish society, yet she proved to be a valuable contributor to the stability and well being of her immediate quaker community and its neighbouring Irish cottagers. She knew the Irish character well; and her educative writings, which resound so richly with Irish voices, are a permanent record of local Irish idioms and dialects. Thus, her contribution to Irish cultural memory cannot be overestimated. Though by all accounts an exemplar of quaker modesty, Leadbeater effectively valorised herself by what she left behind: a legacy of good works, a remarkable body of writings, sensible advice for the Irish peasantry, and, foremost (as Kevin O'Neill suggested) a manageable post-rebellion model of neighbourhood communalism as a new paradigm of nationhood. When her own village was destroyed, she formulated a strategy for its restoration; and at a time when Ireland was imbued with hot revolutionary fervour, hers was a rational, forward-looking vision for Irish quakers and for the increasingly mixed demographic of Ireland. Leadbeater's body of work displays an important and adventurous literary talent, one whose value finally captured the serious attention of scholars in the closing decades of the twentieth century. John McKenna's play ‘The woman at the window’ was first performed at Ballitore Meeting House, Co. Kildare, on 30 October 2003.

Though quakers generally eschewed portraits as sinful vanity, Leadbeater may have sat (perhaps with an eye to fame) for a simple sketch; an unattributed silhouette portrait of her in a quaker cap is preserved in the Joly Collection, NLI Department of Prints & Drawings (NLI, 1204). A copy of this portrait-silhouette is pasted on the flyleaf of MS 3519, Trinity College Library, Dublin.

Applications are invited for the position of Assistant Librarian (Permanent Post).