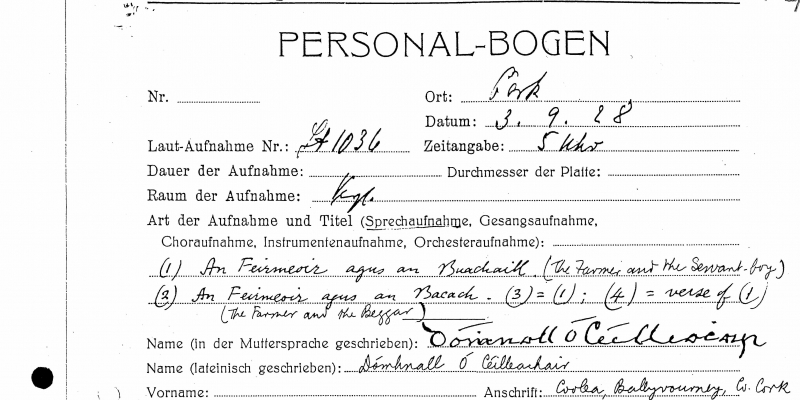 The Royal Irish Academy holds a collection of sound recordings usually known as the Doegen Records. The recordings on 12-inch shellac disks were made between 1928 and 1931 as part of a systematic Irish dialect survey. They record native Irish speakers from seventeen counties in three provinces. They preserve local Irish dialects from regions where Irish is no longer the first language of the people. Many of those local dialects are now extinct, which makes these recordings particularly significant for Irish dialectology. The recordings also preserve the voices of people from early twentieth-century Ireland, many of whom have descendants living in Ireland or overseas.

The content of the recordings consists of folktales, songs and prayers, along with miscellaneous items of Irish vocabulary such as the numbers from 1 to 30 and the days of the week. Individual speakers were instructed as to what stories and prayers to recite. The system adopted is indicated by the ‘Leaflet of Instructions’ reproduced below.

The technical aspect of the project was overseen by Dr Wilhelm Doegen (1877–1967). He was director of the Sound Department at the Prussian State Library (Lautabteilung, Preussische Staatsbibliothek), Berlin and had considerable experience of making sound recordings for research purposes. In the late 1920s he was commissioned to record Irish language dialects in Ulster, Connacht and Munster. The work was undertaken at the request of the government of the Irish Free State, led by W. T. Cosgrave. Wilhelm Doegen was directly involved in the Irish project during 1928. Thereafter the technical work of recording was continued by his assistant, Karl Tempel, who returned to Ireland in 1930 and 1931.

The Royal Irish Academy’s Irish Studies Committee administered the original Doegen Records scheme in association with the universities at Belfast, Cork, and Galway. Myles Dillon, MRIA, was Secretary of the Irish Studies Committee during most of the survey work. Recordings were made at Cork, Killarney, Galway, Letterkenny and Belfast. Speakers were brought to those venues to be recorded and transport and lodgings were also provided where necessary. Speakers were paid a fee of £1 per recording.

When the recordings were complete, a full set of shellac disks was deposited in the library of the Royal Irish Academy, and another set was retained in Berlin. The set preserved in Germany is now in the Humboldt University Library. A third set was divided among the universities at Belfast, Cork and Galway, each receiving the recordings relating to their province.

The Royal Irish Academy holds some archival documentation relating to the original project, including copies of standardised forms used to document basic biographical information about the individual speakers. The original set of these Personalbogen (speaker details) are held at the Humboldt University, Berlin and copies were donated to the RIA in 2004. Some handwritten phonetic transcripts and translations of the recordings are also preserved in the RIA. Supplementary correspondence relating to the administration of the Connacht scheme by Tomás Ó Máille, MRIA (1880–1938) at University College Galway, was donated by Ruairí Ó hUiginn, MRIA in 2010 (RIA, MS 4 B 56).

The recordings for the province of Ulster were re-mastered in digital format in the mid-1990s in an initiative at Queen’s University, Belfast (Mac Congáil & Ó Duibhin, 2009; Ní Bhaoill, 2010). The recordings for Connacht and Munster were re-mastered for the Royal Irish Academy Library in digital format in 1999, supported by funding from the Heritage Council. The Connacht recordings held by the Royal Irish Academy Library were supplemented by the set held at the Hardiman Library, NUI Galway. Copies were produced on CD-ROM in 1999.

Further research was subsequently undertaken in a Royal Irish Academy project funded by the Higher Education Authority. As a result, the complete collection of recordings, with transcripts, translations and notes was published online in 2013.

The Doegen Records website also includes standardised biographical information on individual speakers, along with photographs of the speakers where available. Some photographs of speakers were sourced from the National Folklore Collection at University College Dublin.

Each of the selected speakers will be expected:

(a)  to sing a few verses of a song, or to tell a short story, or a few local anecdotes, etc.

(b)  to recite the parable of the Prodigal Son on the basis of the enclosed version by Canon O’Leary.

It is requested that the following points be most carefully noted by all concerned in the training of speakers.

(1)  While it is desirable that speakers should articulate as distinctly as possible, they should be encouraged above all to speak quite naturally and in everyday tones.

(2)  The enclosed text is meant to serve as a head-line for speakers. While the story should be closely followed, and under no circumstances abbreviated, anything in it which is foreign to the ordinary speech of the district should not be used. Teachers are accordingly requested to alter any unfamiliar words or idioms beforehand, substituting the local equivalents. Further, speakers should be encouraged, when reciting the parable, to reject all words, inflections, and idioms which are unfamiliar to them in favour of those in use locally.

(3)  The text (revised as far as necessary) should be read out to the speakers several times, and it is most desirable that they should be submitted to a final test immediately before their departure.