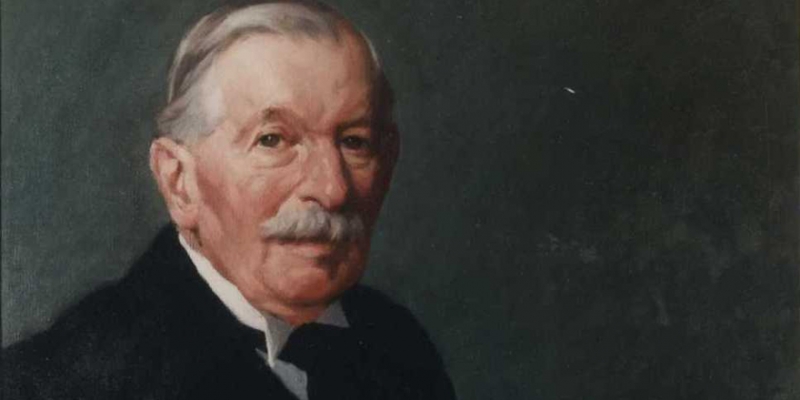 R.A.S. (Robert Alexander Stewart) Macalister (1870–1950), archaeologist, epigraphist and Irish scholar, was professor of Celtic Archaeology at the National University of Ireland. His archaeological research included work on Palestine as well as Ireland. He served as President of the Royal Irish Academy from 1926 to 1931.

Among the Irish language works he edited for the Irish Manuscripts Commission were facsimiles of two medieval manuscripts, the Book of Uí Mhaine and the Book of Lismore, published in 1942 and 1950. He also prepared a five-volume composite edition of the verse and prose texts known as Lebor gabála Érenn for the Irish Texts Society (London, 1938–56). His monograph publications included: Studies in Irish epigraphy. A collection of revised readings of the ancient inscriptions of Ireland, with introduction and notes (3 vols, London, 1897-1907); A history of civilization in Palestine (Cambridge, 1912); The Philistines: their history and civilization (London, 1914); The language of the Nawar or Zutt the nomad smiths of Palestine (London, 1914); Ireland in Pre-Celtic times (London, 1921); The archaeology of Ireland (London, 1928, 2nd ed. 1949); A century of excavation in Palestine (2nd ed., London, 1930); Tara: a pagan sanctuary of ancient Ireland (London, 1931); Ancient Ireland: a study in the lessons of archaeology and history (London, 1935); The secret languages of Ireland, with special reference to the origin and nature of the Shelta language (Cambridge, 1937); Corpus inscriptionum insularum Celticarum (2 vols, Dublin, 1945, 1949)

During the 1930s and 1940s Robert Macalister donated a varied selection of archaeological, literary and linguistic manuscripts, as well as some printed books and pamphlets, to the Royal Irish Academy Library. The Academy’s ‘Macalister collection’ comprises manuscripts, antiquarian drawings and books that he had collected rather than his own research notes. The Academy Library also holds a collection of his published books and articles. Details of individual items can be found on our online catalogues

Archaeological manuscripts, antiquarian drawings and ephemera from the collection of R.A.S. Macalister

Irish language manuscripts from the collection of R.A.S. Macalister

Robert Macalister donated his collection of Irish language manuscripts to the Academy Library. These are itemised here and are described in more detail by Gerard Murphy and Elizabeth FitzPatrick in the printed Catalogue of Irish manuscripts in the Royal Irish Academy, fasciculus XXV (Dublin, 1940), nos 1163–1191. Most date from the nineteenth century, with a few eighteenth-century items. Some of these manuscripts had numerous owners in a relatively short period of time.  Some had been owned at one time by D. Fitzgerald and were purchased by Macalister from Alfred Nutt; some other items had been formerly owned by Charles Haliday, MRIA.

The condition of the smaller Irish language manuscripts varies; a few came to the Academy unbound and in poor condition.

R.A.S. Macalister also donated printed books to the RIA library at various times, including numerous Irish language items. Among the other curiosities in the collection is a Cornish grammar and vocabulary (1790). These printed works form part of the core collections of the Academy Library and are itemised in the Main catalogue which is available online.