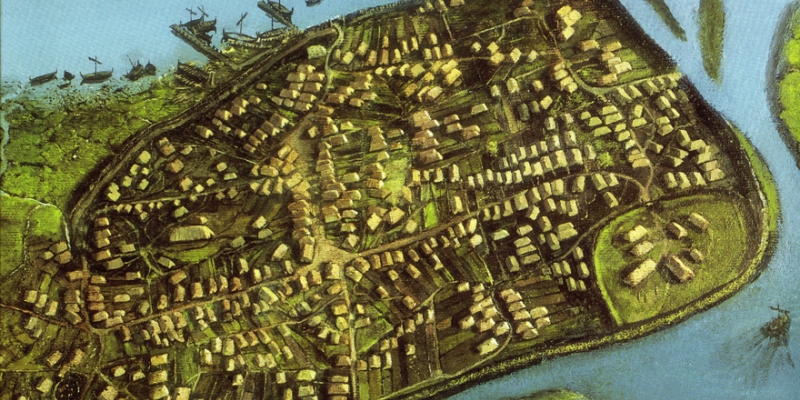 Howard Clarke on the 'Viking town'

The first in the series is on the Viking town by Howard B. Clarke, author of IHTA no. 11, Dublin, part 1, to 1610 (Royal Irish Academy, 2002). In this essay, Clarke challenges the traditional notions of the development of Viking towns in Ireland.

It has often been asserted that the Vikings founded Dublin and, by extension, Cork, Limerick, Waterford and Wexford. But is this notion really true?  The published IHTA fascicles for Carlingford, Dublin (part I), Limerick and Youghal suggest answers to this question.

Carlingford’s Viking associations amount to little more than the place-name, whose second element is derived from Old Norse fjör∂r (English fjord), meaning an inlet from the sea. The word víkingr came to represent a sea pirate who lurked up a fjord ready to pounce on his merchant prey. This sort of activity has nothing to do with towns or with town foundation. The town of Carlingford was founded as such in the late twelfth century following on from the Anglo-Norman incursion into Ireland.

The place-name Youghal is purely Irish, meaning ‘yew wood’ (as in the case of York in northern England). Its Viking associations are documentary and amount to the recorded presence of a fleet based there in the mid ninth century. No archaeological evidence has yet been found on the site of the later town, which started life in the early thirteenth century as another colonial initiative.

The atlas fascicles for Dublin and Limerick provide a more complex and nuanced association with Vikings. In both cases a longphort or ship harbour was established in the ninth century and in both cases, too, the Vikings’ base was re-established on a different though nearby site. At Dublin the change was from Duiblinn (modernised as Dubhlinn) to Áth Cliath; at Limerick from near Athlunkard (‘the ford of the longphort’) to King’s Island. Only in the course of time did the second site become the focus of real and permanent urban development. 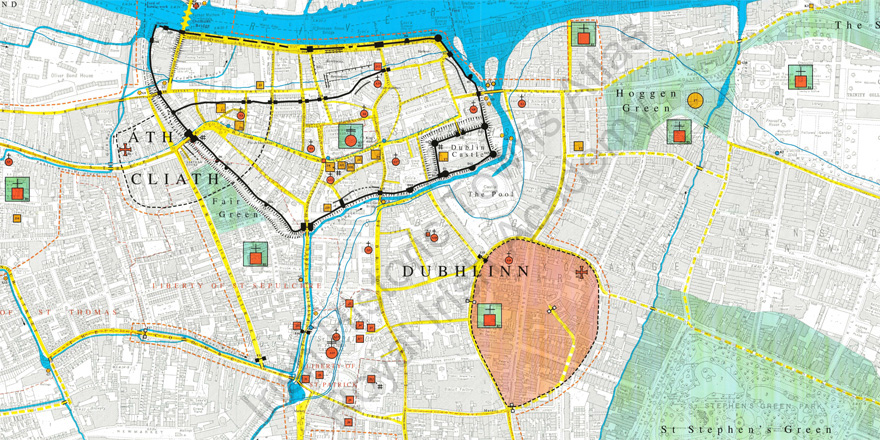 Extract from IHTA no. 21, Limerick, by Eamon O'Flaherty, Figs 1 and 2, the location of the Viking town and conjectural layout.

The reason for this is quite simple. Most of the Vikings active in Ireland came from Norway, a country that had virtually no towns. The sole exception is Kaupang, situated on the western shore of Oslofjord, but under Danish control for much of the ninth century. Its urban character was always marginal and it was abandoned as a settlement at some point in the later tenth century. Vikings from Norway did not come to Ireland with sophisticated notions about towns and town foundation.

In effect, as the Dublin and Limerick fascicles demonstrate, these places retained their original Irish names and evolved by stages into towns in the course of the tenth century and later. They were more in the way of Hiberno-Norse creations than purely Viking ones. Limerick was taken over by military force by the Dál gCais (O’Briens) in 967, while Dublin came under mainly Irish tutelage in 1052.

During the early middle ages, in many parts of Europe, town formation and growth were complex and often hesitant processes. Even in Mediterranean countries, smoothly functioning towns were a distant memory from Roman times, whilst in non-Roman Europe north of the Alps fresh beginnings were the norm. Vikings as sea pirates attacked and occasionally took over existing towns, as at York. In some cases, irregular raiding turned into regular trading and a viable town emerged. These IHTA fascicles tell us the true story of Viking towns.

IHTA Online is a collaborative project with the Royal Irish Academy and Eneclann (Irish Genealogy and History Research Services). The cover, essay, topographical information, core maps and bibliographies of IHTAs 1 to 27 are freely available as pdfs online.